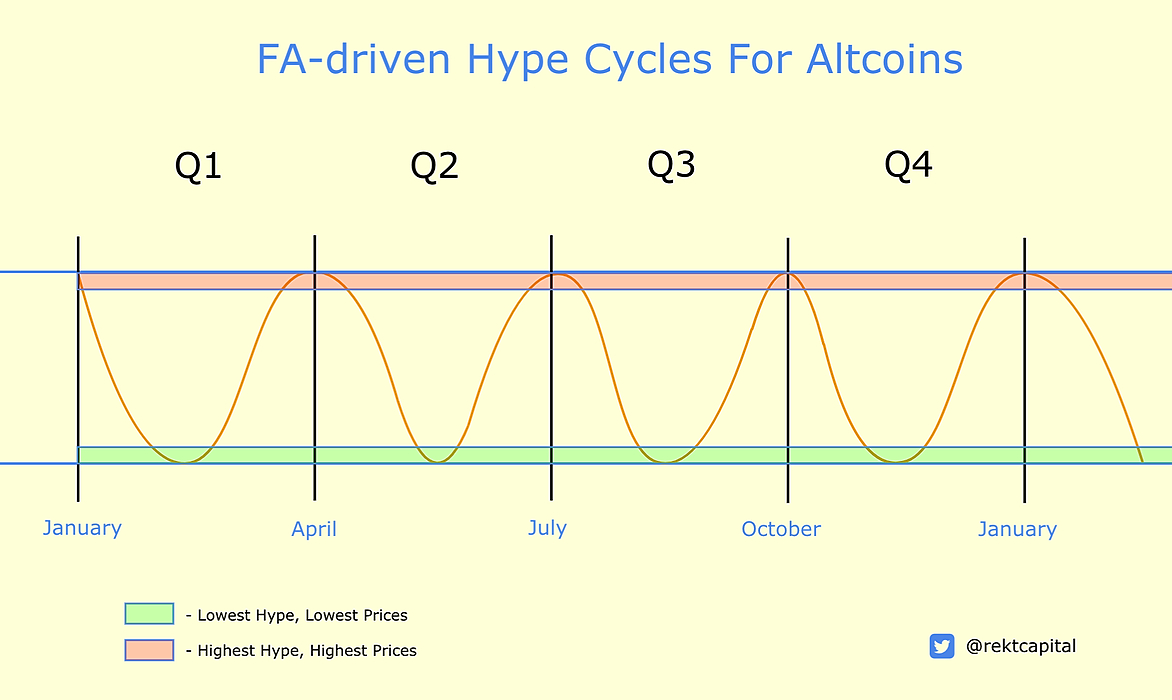 Hype moves markets...and the best thing about hype is that its potential is limitless.

If an Altcoin project is scheduled to make an unspecified announcement in the next few weeks — that announcement could be anything.

This is where our imagination comes in.

Our imagination conjures up a multitude of scenarios as to what this announcement could be about.

The endless possibilities of hype caffeinate our imagination.

And our imagination is intricately tied with our deepest desires and wishes which we tend to project onto Altcoins that could fulfil them.

Altcoins become objects of our fantasy.

And the hype makes our fantasies feel very possible and very real.

Whether it is a scheduled Mainnet Release or an announcement of an innovative licensing model — hype is born.

Because after all — the Mainnet Release could have an amazing impact on the value of the project that you’ve invested in.

It could make you a lot of money.

If hype is what caffeinates our imagination and fantasies, a lack of understanding further compounds the hype.

“Mainnet Release” or “block reward reduction” doesn’t mean all that much to most market participants.

But it sounds like an important enough catalyst that could jolt an Altcoin into an exponential uptrend and make investors in the project wealthier.

These are the mental shortcuts that most people take.

As humans, we have a default mental disposition to take shortcuts in our thinking.

After all, we are psychologically lazy and attempting to understand what a block reward halving does is cognitively effortful.

When hype is born, imagination caffeinated, and money on the line — that’s a powerful cocktail of emotions that will hyper-activate emotional structures in the brain.

This hyper-activation will prime us to think in terms of associations, jump to attractive conclusions and make streamlined self-gratifying assumptions.

In short — it will make us emotional.

“Buy The Rumours, Sell The News”

Fundamental Analysis (i.e. “FA”) is the study of how fundamental aspects of a project could potentially affect the valuation of that project in the future.

Block reward reductions, Mainnet Releases, Beta testnets, Smart Contract releases on blockchains, or announcements of new partnerships — all of the above will impact the fundamentals of a project and thus its valuation.

Whenever an FA-driven event is scheduled or announced, it is always met with an emphatic reaction from buyers in the market.

This emphatic reaction is rooted in the simplest of narratives — “this event will make my investment grow.”

This narrative is simple yet compelling enough to drive price up exponentially.

Based on this narrative, market participants assume the Altcoin in question is a bargain and tend to buy it up in anticipation of a significant mark-up.

Some buyers are early to the party and accumulate ahead of time.

The Psychology of Bargain Hunters and FOMO Buyers

These buyers are bargain hunters and will often profit the most given their early involvement in the Hype Cycle. They tend to accumulate when the hype hasn’t really ballooned and translated into the price of the Altcoin.

But most buyers will join the party when the excitement is already evident in the price action. The simple narrative of price appreciation is what also motivates people who experience the Fear of Missing Out to invest in the coin.

Once the hype reaches its peak, this is when the narrative of “buy the rumour, sell the news” has been completely priced into the uptrend.

And this is when the uptrend begins to falter and show signs of weakness because market participants who bought early begin to take profits. They had bought into the hype in anticipation of a significant mark-up and now it is time to “sell the news” as the scheduled Mainnet Release or announcement looms large.

Buying in anticipation of price appreciation and selling as the deadline approaches is a trading phenomenon in the markets commonly referred to as “buy the rumour, sell the news”.

When Hype Wanes, Doubt Creeps In

It is often the case that the “news is sold” a few days or sometimes even a couple of weeks before the deadline.

Coincidentally, this is also the time when some uncertainty and doubt sets in.

It’s also the time when the lofty, ambitious expectations are met with a stone cold reality that the announcement wasn’t really a big deal.

That the Mainnet Release wasn’t much of a game-changer.

Inevitably, investors are left disillusioned because the reality didn’t align with their expectations.

I use the word ‘disillusioned’ because it is a time where investors have to disentangle themselves from an illusion that they, quite literally, bought into.

The game-changing, paradigm-shifting illusion that simply didn’t “live up to the hype.”

Hype as the caffeine that fuels our imagination dissipates, the high wears off, and withdrawal promptly sets in.

The spell is broken.

Events such as partnership announcements or Mainnet Releases come in cycles.

At the end of every Quarter, Altcoin projects are obligated to give updates to investors about their progress.

This is when long-awaited Mainnets are officially scheduled to be released.

New developments and updates are to be announced.

Crucial deadlines are to be met.

From a fundamental standpoint, this is the reason why Altcoins experience a lot of hype near the end of every Quarter.

Every Quarter is accompanied by its own Altcoin Hype Cycle. 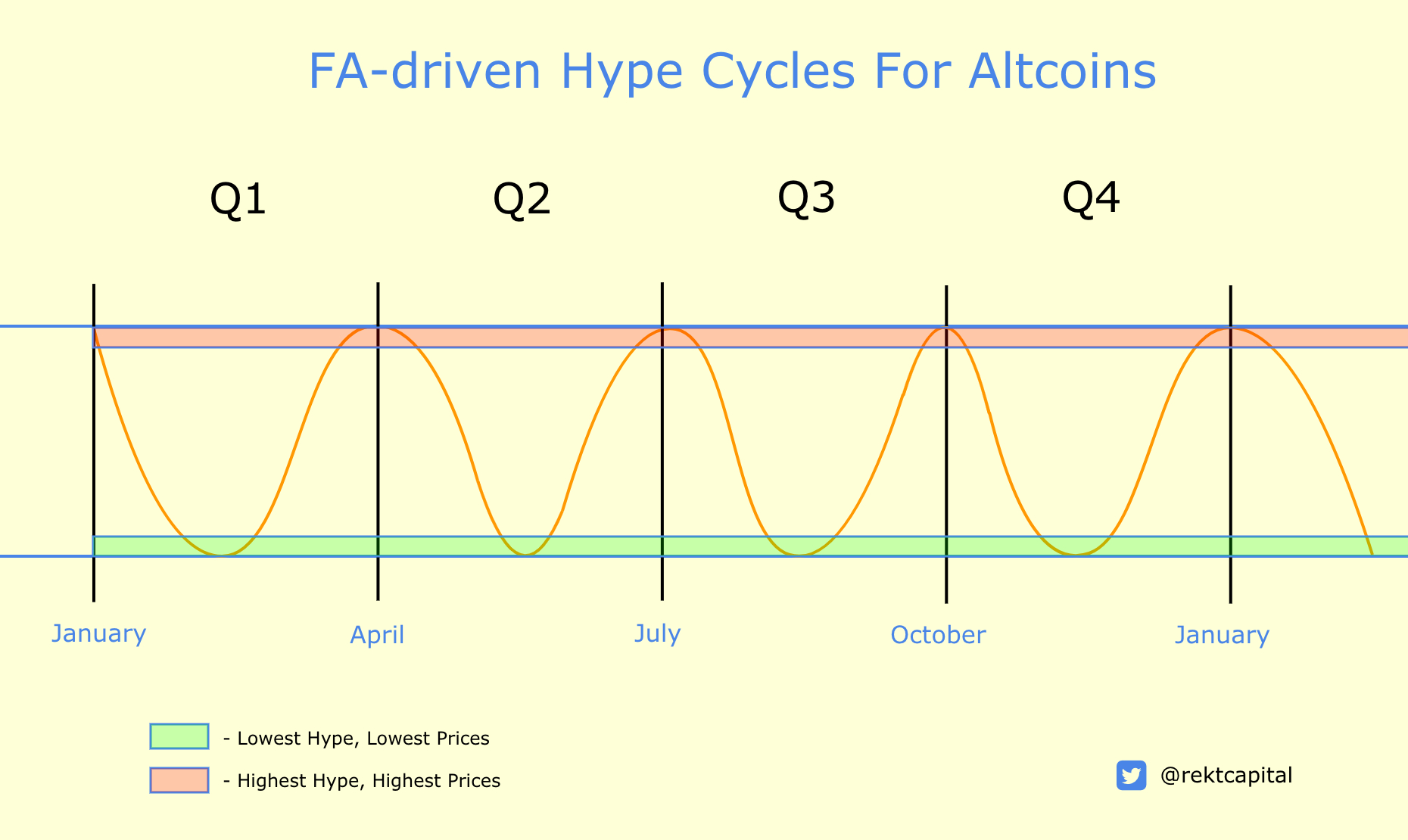 Altcoin Hype Cycles — How to Make the Most of Them

Trading and investing is all about maximising the efficiency of your money.

In the context of Altcoin Hype Cycles, this boils down to two things:

Timing — because you need to know when to strategically position your capital so that it is well-placed to experience significant appreciation.

The illustration above will help you with timing.

Think like the bargain hunter: buy in anticipation of the hype before any hype has translated into price.

This is the best possible investment in terms of your risk-to-reward parameters. Your risk of downside is limited when hype is at a minimum and the prospect of reward is promising once the hype becomes palpable.

The second thing that will help you make the most of Altcoin Hype Cycles is information — because you need to know what event is likely to move price.

Hype moves markets but not all events are equal.

A blockchain conference will generate significantly less hype compared to a Mainnet Release, for example.

Simply knowing about an event isn’t enough; distinguishing between them is crucial.

Here is an invaluable free resource that will help you.

CoinMarketCal is a community-driven online calendar for Cryptocurrency- and Blockchain-related events, updates, and releases.

Some events are even marked as a “Hot” to indicate that it is a meaningful event that traders and investors alike are looking forward to.

These are events that have the ability to considerably move markets.

Coinmarketcal is a valuable resource for cryptocurrency traders and investors.

Here are a few trades that I shared on my Twitter during the Q3 2019 Altcoin Hype Cycle.

The peak of the Hype Cycle occurred at the end of September (i.e. end of Q3).

Insolar is a great example of how strong hype towards an Altcoin project can move markets.

Insolar had only a few things scheduled for the end of Quarter 3 but these were all substantial releases/developments, most notably the Mainnet.

All three events were marked with a flame icon in the left top corner (i.e. “hot” status) to signify a strong community interest in these releases.

In terms of fundamentals, there was plenty of hype towards this particular Altcoin project.

However, this hype hadn’t yet translated into price.

This was clearly evident in Insolar’s price action which had formed a falling wedge — a technical price pattern that typically precedes price appreciation. 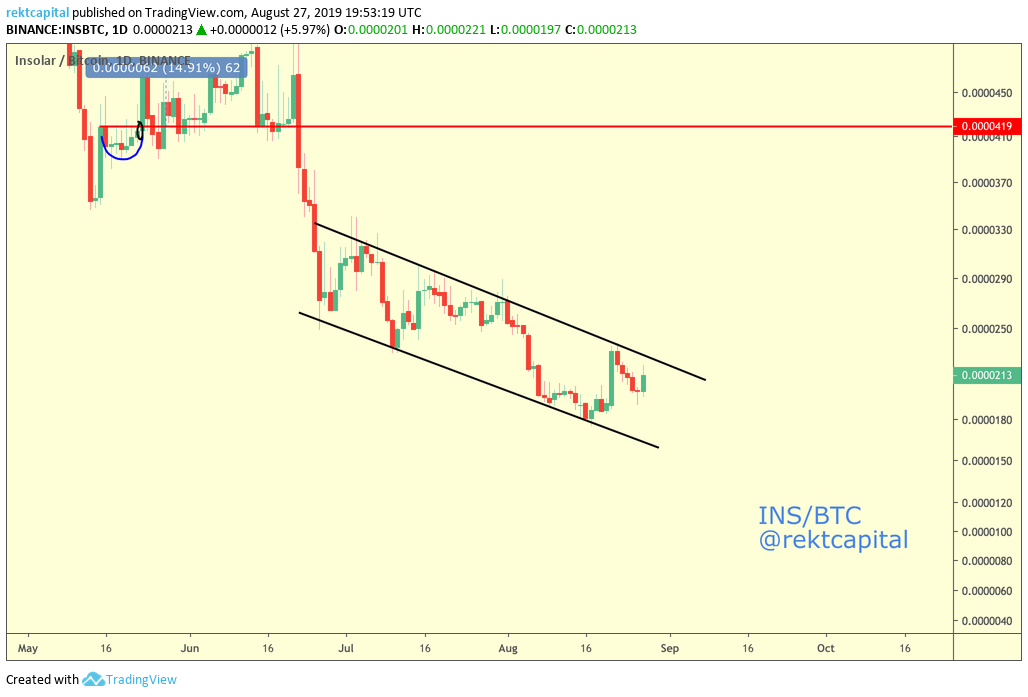 It is a very positive sign for traders and investors whenever Fundamental Analysis aligns with Technical Analysis to generate such strong confluence.

It is at these moments that a trader can assume the role of a bargain hunter and strategically position himself to profit from any hype that has yet to translate itself into price.

As the saying goes: 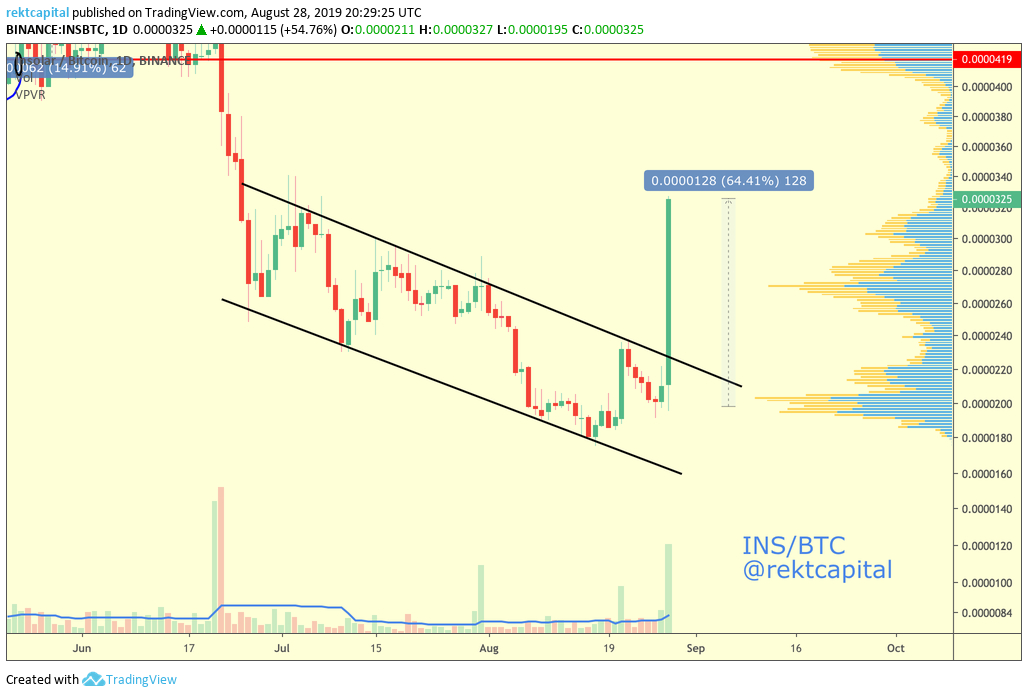 OST was another Altcoin that outperformed Bitcoin during the Q3 Hype Cycle of 2019.

While OST lacked significant releases, this Altcoin project clearly made up for it with the sheer volume and variety of events. 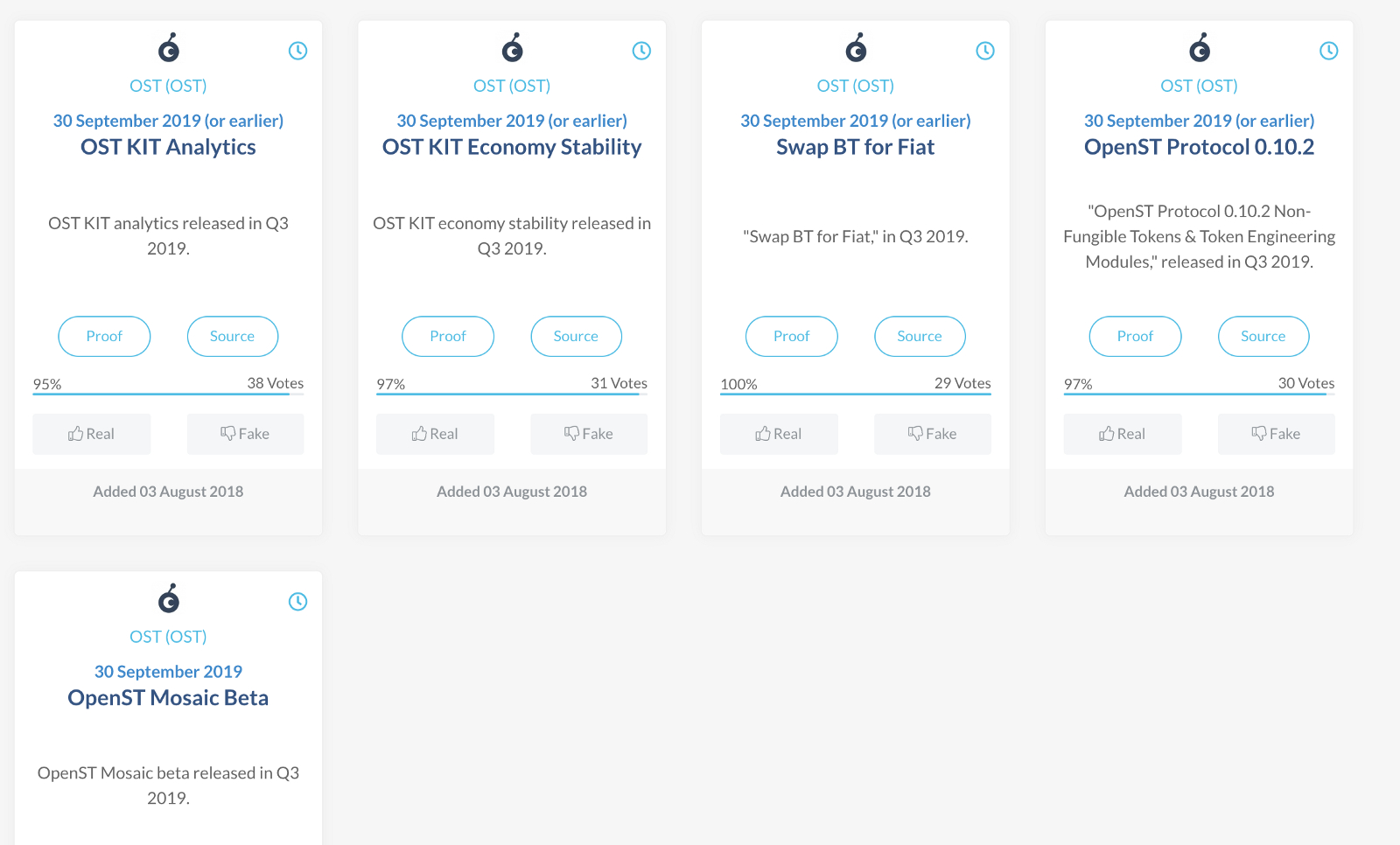 From a purely technical standpoint however, OST had formed a falling wedge on price in the meantime. 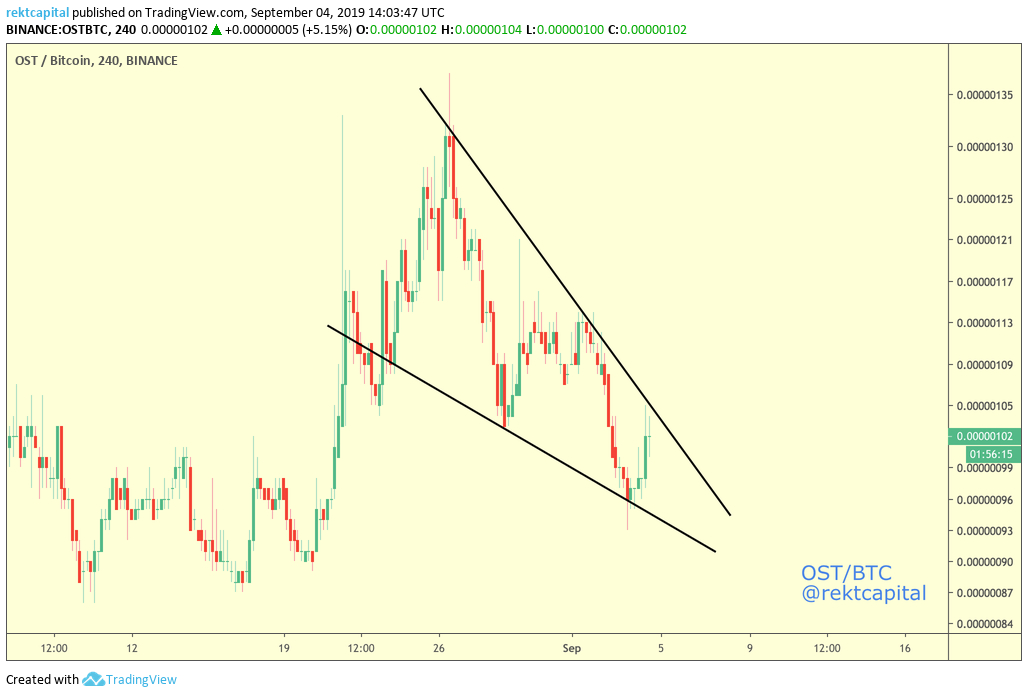 This falling wedge differed slightly from the one mentioned in the previous example in that OST’s price action coiled in towards the apex of the structure and compressed significantly as a result (price compression is often a precursor to price expansion). 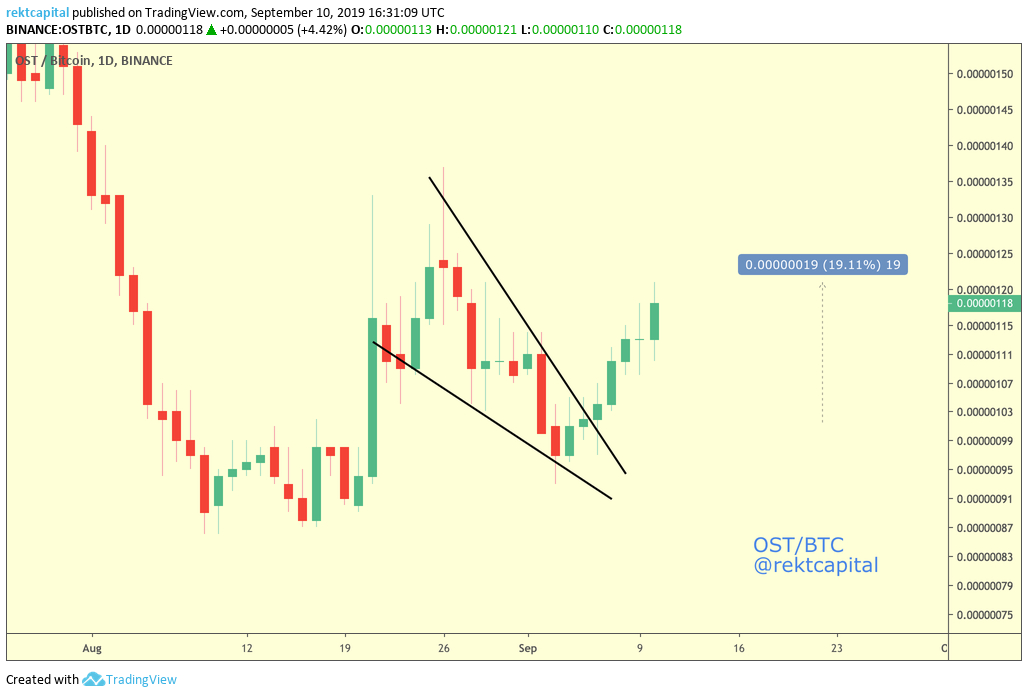 Similarly to TAEL (WABI) — OST lacked major releases but generated a lot of hype due to the amount of updates that it had scheduled at the end of the month. 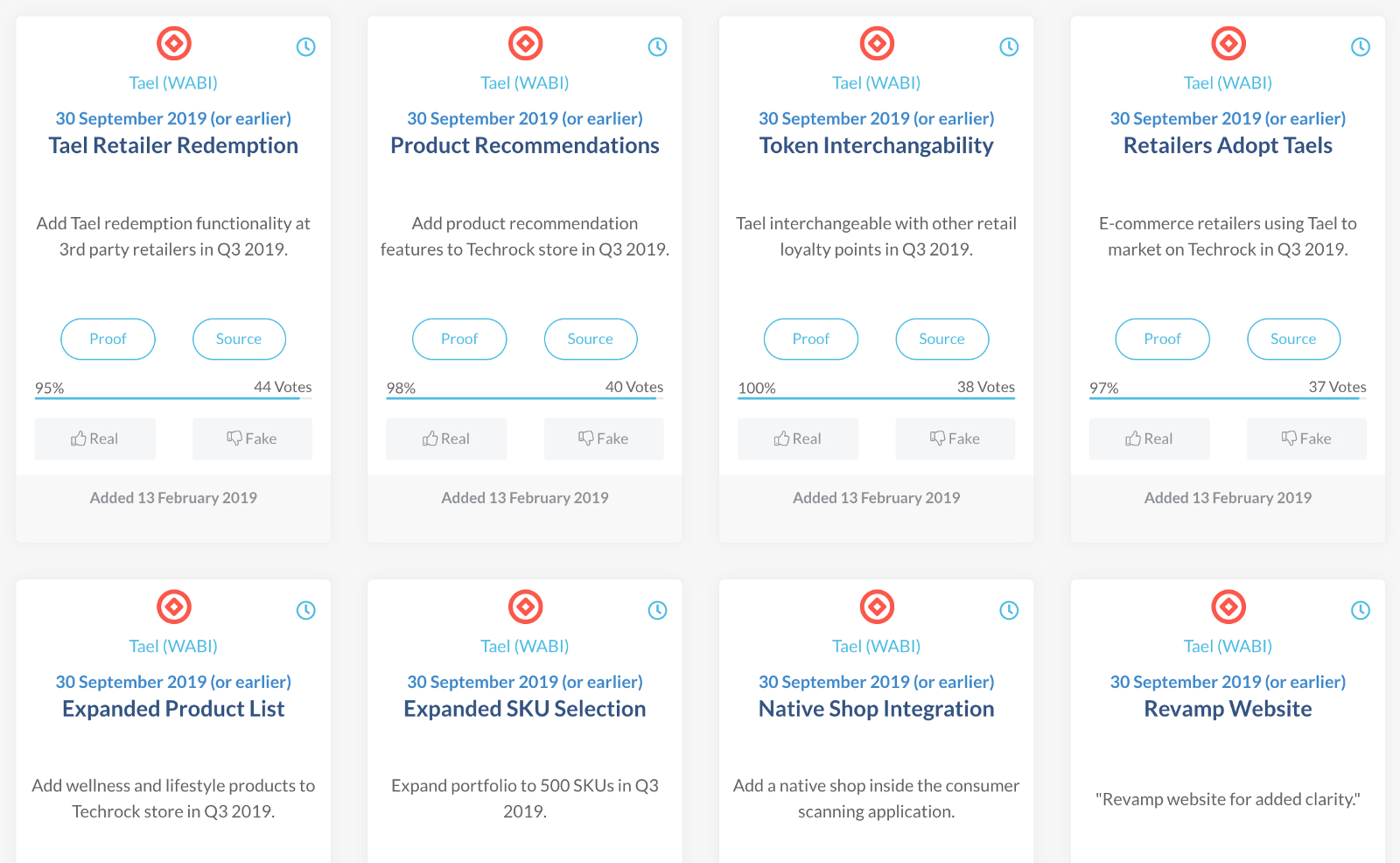 This is great example that shows that an Altcoin project can build enough hype and interest around it by simply being active in the space. 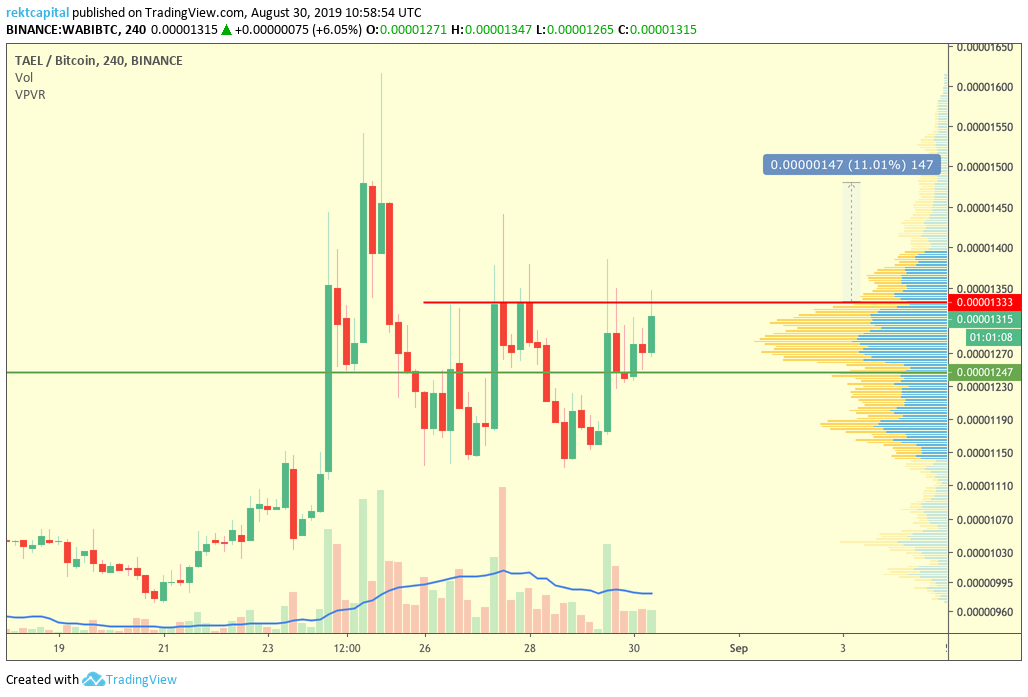 The hype behind the volume and variety of events compounded into a +38% growth in price: 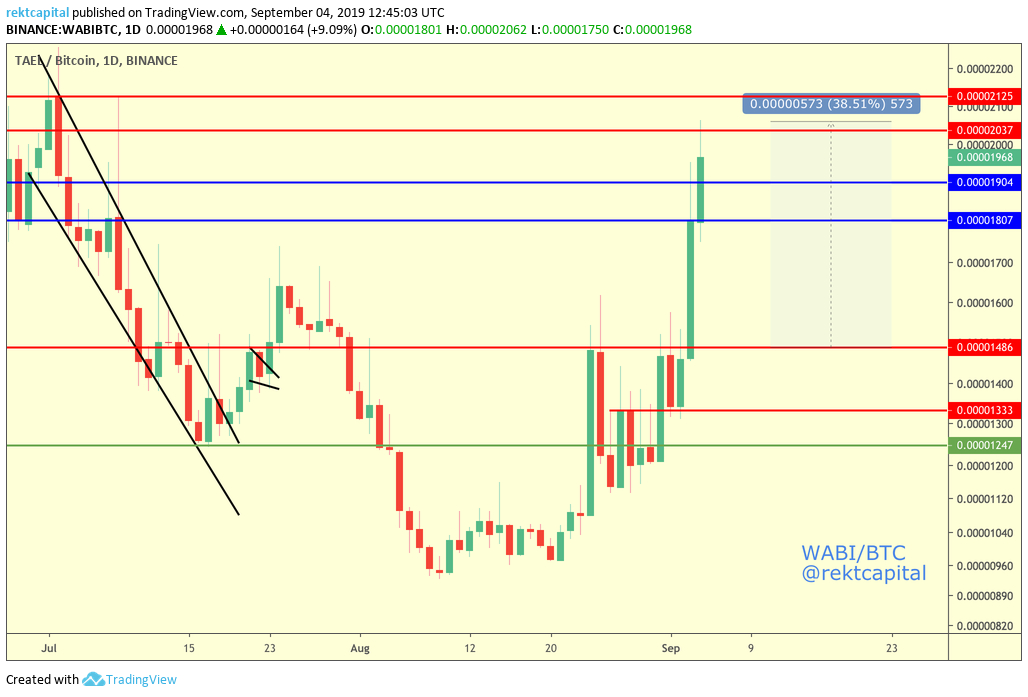 Price appreciation in Altcoins is cyclical.

And a lot of the time, this price appreciation is generated by a combination of promising fundamentals and strong technical price positioning.

However, these fundamentals become priced in once the end of a specific Quarter looms large.

It is this pricing in that tends to precede a correction in Altcoins during which hype wanes, the “news is sold”, and the Hype Cycle is over.

This article has showed that Fundamental Analysis and Technical Analysis are two sides of the same coin.

Both approaches to investing work and often complement one another.

But it is also intangible qualities such timing and access to the right tools that can help with one’s strategic positioning to opportunity.

Related Stories
Subject Matter
Earn Crypto Rewards Monthly by @Mysterium Network
#promoted
The New Cycle of Bitcoin Over the Next 4 Years by @rektcapital
#bitcoin
The Role of Blockchain and Decentralization in the Digital Economy by @maddykutechno
#decentralized-internet
$Fil Mooned Right After I Sold It. Am I Weak Hands? by @digifinex
#filecoin
My First Impressions on BitClout by @TheLoneroFoundation
#bitclout
Zero-Fee Trading, Global Liquidity, and The Many Woos of WooTrade by @sonhng
#cryptocurrency
Interchain Transaction Bridge - The Missing Key to Creating Seamless UX in a Multi-chain Universe by @weitingchentw
#bitcoin