The Top 4 Startup Accelerators: Is Y Combinator Still the Best? 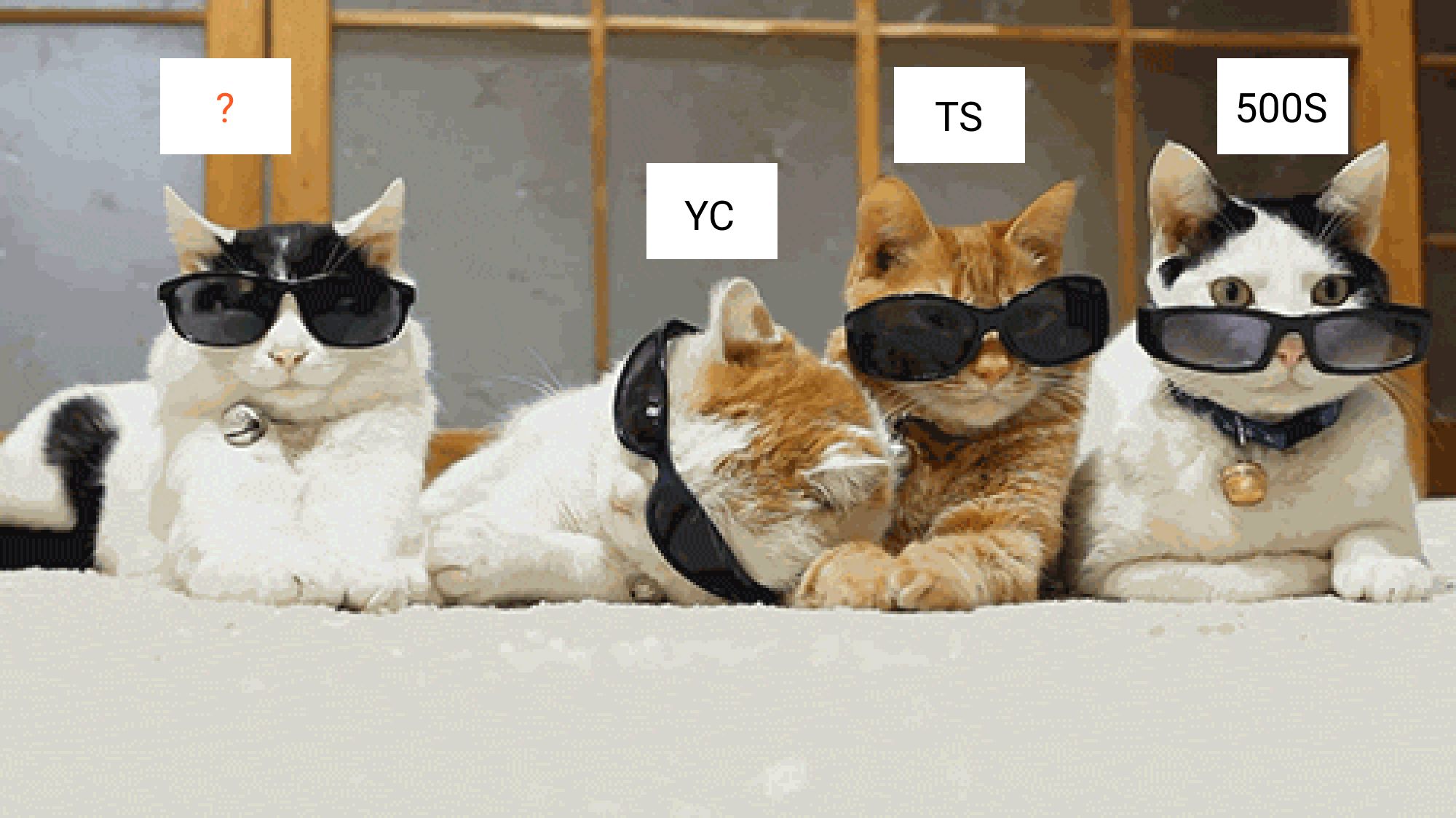 A founder of RUSSOL, a startup school, where ideas are converting into demanded products

Where is the next Facebook, Google or Postmates coming from and why you shouldn’t choose Y Combinator? A comparison of the world’s top 4 startup accelerators

While many start-up accelerators and business incubators have paused accepting applications due to the pandemic, the world’s top four accelerators continue the search for what’s next. So, who are the top four, what they are, what are their terms and conditions, how they differentiate from each other — and most importantly, which one should you choose?

Accelerators help talented entrepreneurs to grow quickly, find their market, get customers and so much more. Typically, they will take a small share of the business, or they may help at no cost at all. Sometimes, entrepreneurs are equipped with only the idea and a desire for a global scale. This is done through mentoring, to help support their current work, provide access and meetings with decision-makers of large corporations, as well as opening direct access to funding.

Accelerators are often judged by the success and valuation of companies that have been through their program. Many could become stars of IT on their own merits, however, statistics show that generally, these programs do help. For the calculations in the article, I use data from the accelerators’ own, as well as the data from well-known business media and venture resources: Inc, TechCrunch, Seed DB, CrunchBase, CB Insights, Forbes, and others.

At least 21 unicorns (companies worth over $1 billion) grew out of companies that passed this program. This is 3.88% of all firms with such a capitalization in the world. Alumni include Airbnb, Stripe, Reddit, Twitch, Instacart, and others. Y Combinator’s track record also includes 102 companies with valuations above $150 million. Investors in Y Combinator startups often include the most famous venture capital funds — Andreessen Horowitz, Khosla Ventures, Sequoia and Accel.

The total capitalization of companies that have passed the Y Combinator accelerator program is over $155 billion, up by almost 50% since the beginning of 2019. Jobs created from companies in the fund’s portfolio nearly doubled to over 50K high-paying jobs to the economy in the same timeframe. 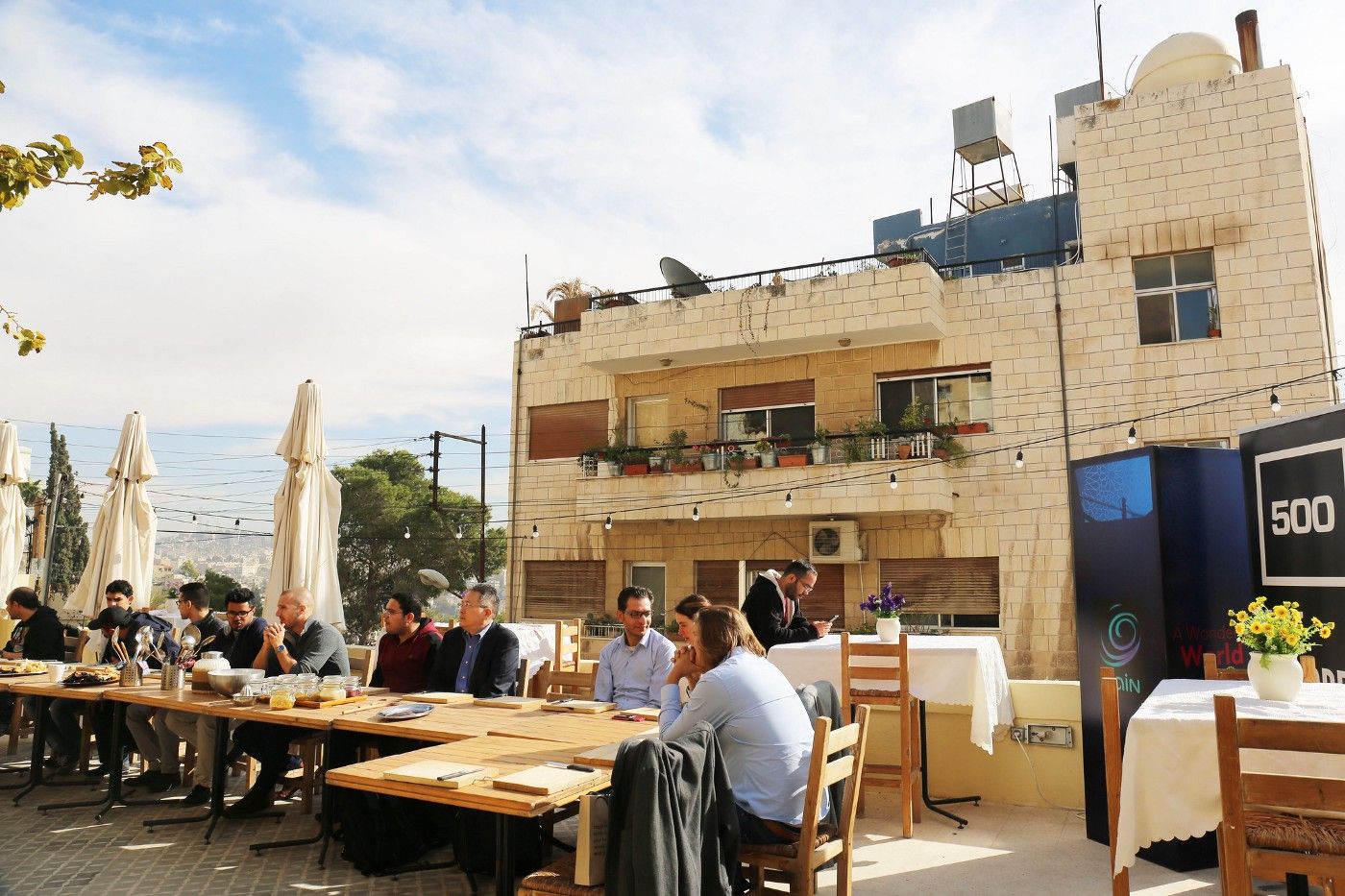 With new managing partner Tony Wang coming in the last half of 2019, 500 Startups is stepping up their game and their portfolio, going from ten unicorns to 19. The most notable are: SendGrid’s email services, Twilio text message notifications, the graphic utility Canva, and the Ukrainian GitLab, where Y Combinator is also an investor. To date, the 500 Startups portfolio includes at least 85 companies with a valuation above $100 million.

The strategic partners of 500 startups are the UAE-based SHUAA Capital (previously ADFG fund), joined in 2018. The total amount of the accelerator fund’s committed capital is $600 million according to 500 startups spokeswoman Zina Moukheiber.

Techstars and AngelPad round out the top four in the world

Techstars currently has at least 3 unicorns, including cloud service provider DigitalOcean, SendGrid and Twilio, as well as 37 “hundred millionaires” as of February 2019. The total valuation of companies in their portfolio is $29.1 billion as of September 2020 according to Techstars spokeswoman Ali Donnermeyer. The total Techstars funds available for investing in startups were $558 million as of July 2019.

Until 2018, the AngelPad accelerator shared first place with Y Combinator in the MIT/Brown University Seed Accelerator ranking several years in a row. That is the reason I added it here. The portfolio includes three unicorns  —  Postmates delivery service and co-investments in SendGrid and Twilio. In early March 2018, AngelPad raised $35 million to invest in startups according to the SEC. 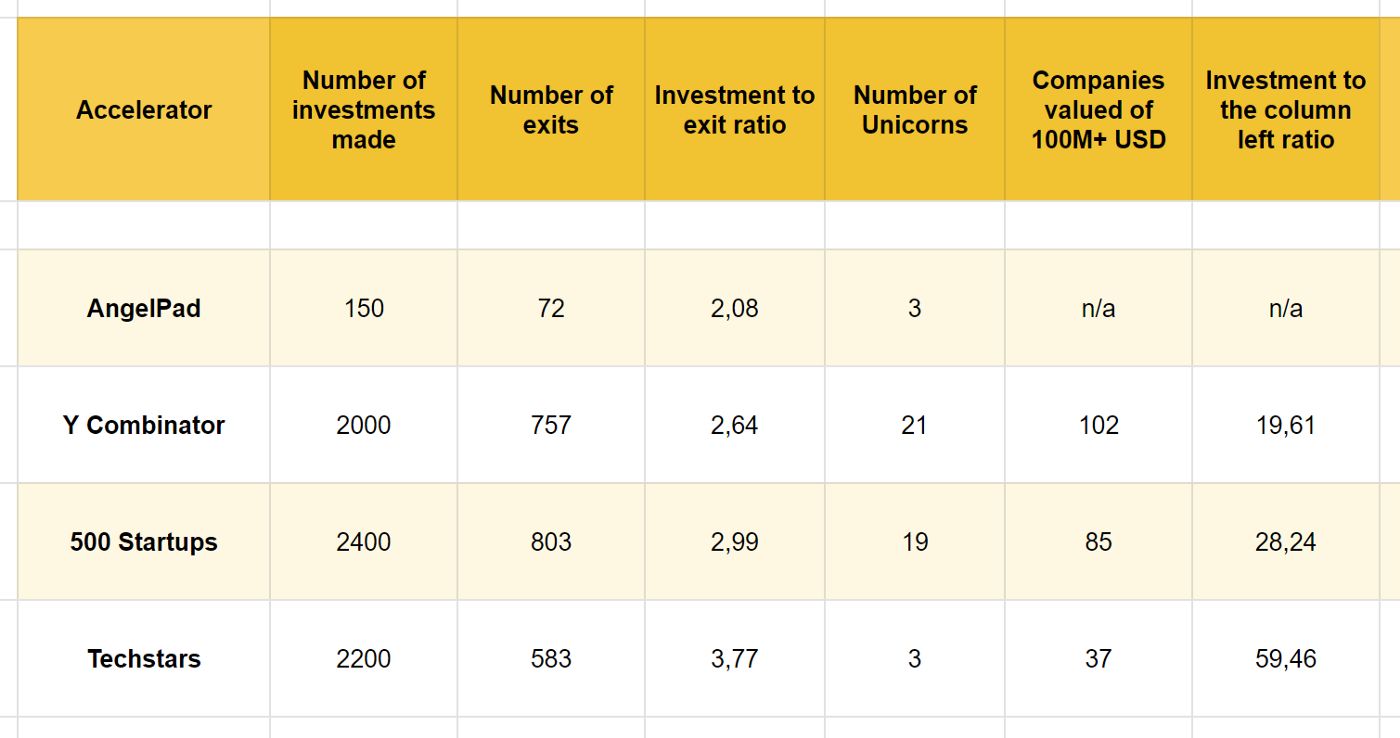 Today, Y Combinator offers $125K for a 7% stake in the startup, down from the $150K offered in 2019. It is interesting to note that until 2013, Yuri Milner’s DST fund, together with SV Angel, automatically invested $150K in the accelerator’s graduates. The startups received an additional $15K-$20K from Y Combinator. After 2013, Milner was replaced by Khosla Ventures.

500 Startups give young companies $150K for a 6% stake, and $37.5K is immediately deducted for participation in the educational program. The startup then receives the remaining $112.5K.

Techstars gets a 6% stake for providing graduates with a $100K convertible note. At the start of the program, the team is also given a $20K scholarship for living expenses. AngelPad offers $120K in exchange for a 7% stake in the $120K startup.

Techstars, 500 Startups, and AngelPad provide a physical location where startup founders, curators, and program mentors work side-by-side, claiming this as one of their advantages. With the advent of COVID-19, the programs were moved online, making this benefit null. Y Combinator already allowed teams to work from home so that nothing distracts from coding and user engagement.

All acceleration programs might give their startups free credits to Amazon, DigitalOcean, and AdWords services, a value that can tally up to hundreds of thousands of dollars but is an often overlooked benefit. 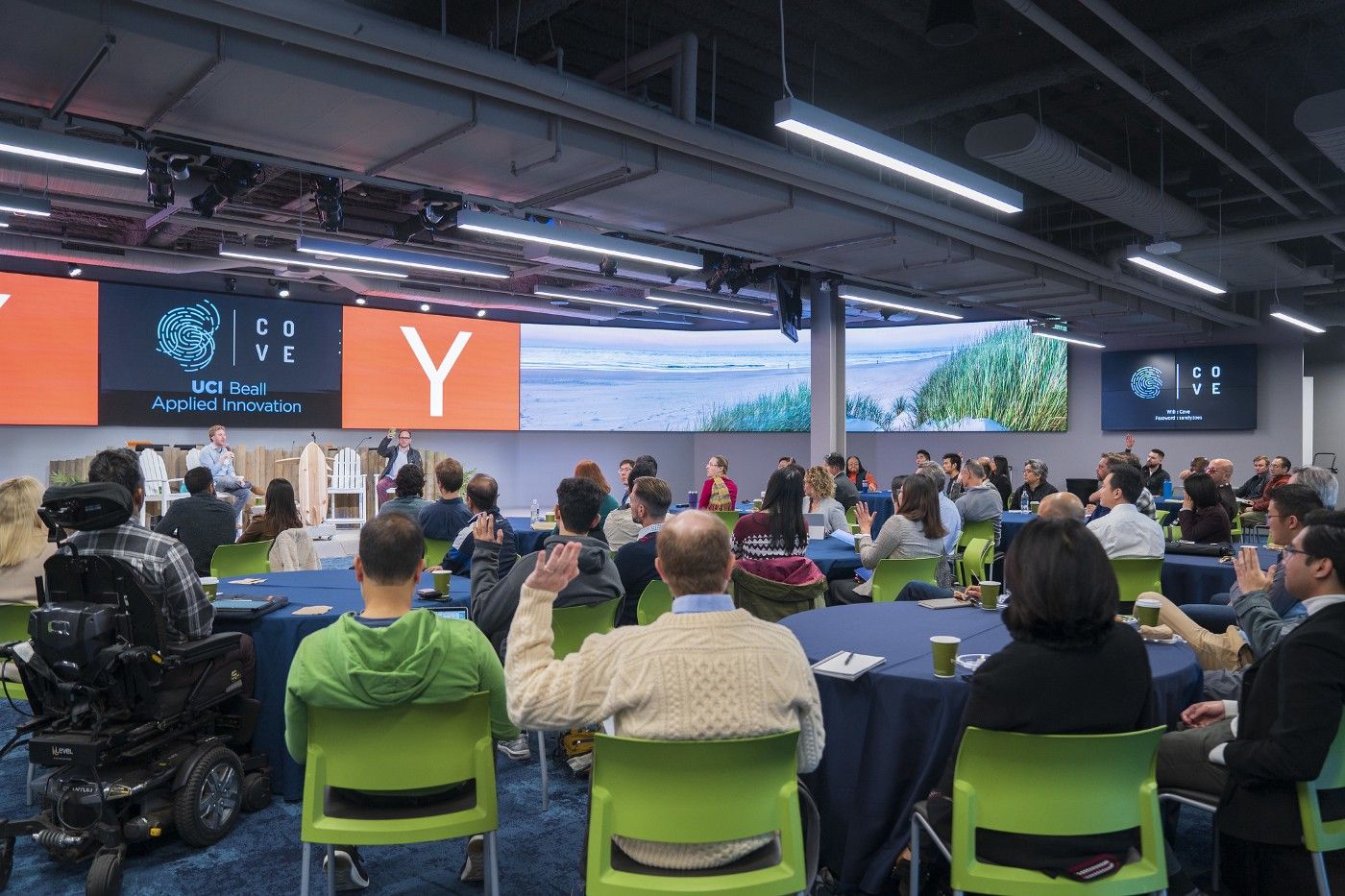 Beginning in winter 2020, participation in the batches and all programs fully shifted to be online. 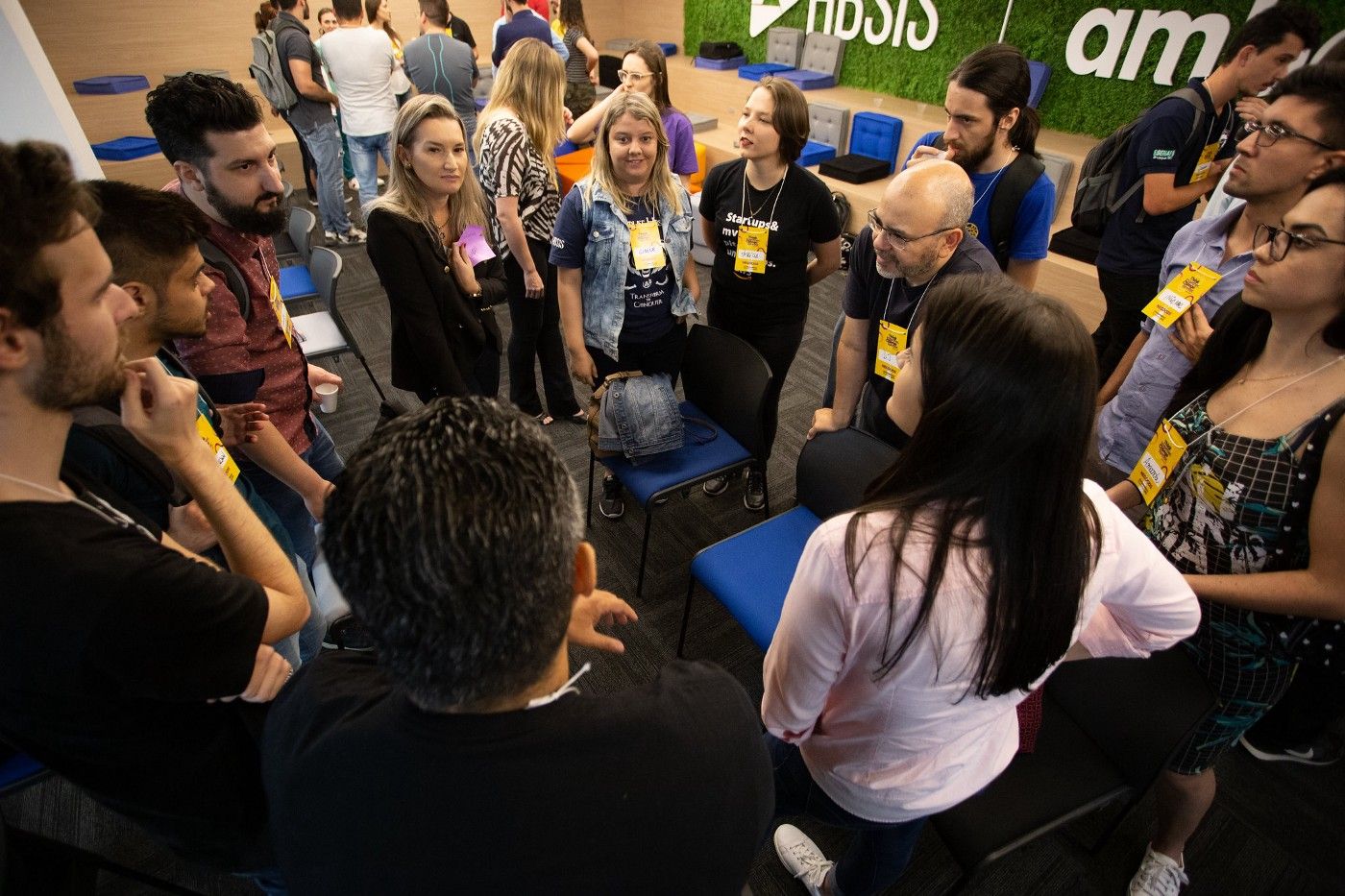 At one of the Techstars events. Credit: Startup Weekend Blumenau

At Techstars, unlike Y Combinator, the program is divided into several phases, where startups work with mentors: setting and execution of their goals, an educational program and a Demo Day.

Since April 2020, Demo Days and other programs are held virtually.

Educational programs at 500 Startups and a personal approach at AngelPad

500 Startups is structured similarly to Techstars and focuses on building up missing competencies and skills with over 200 hours of educational live content. The training is divided into weeks, each one devoted to lectures and workshops on an individual topic.

AngelPad has an alternative approach. Instead of aggressively scaling the accelerator to other cities and overseas and working with hundreds of teams at the same time, the team works with a small group of up to 15 startups. AngelPad’s job is to help you individually with sales and product. Demo Day does not include classic show pitches — the participants immediately communicate face to face with those investors who, according to the organizers, are most suitable for each other. 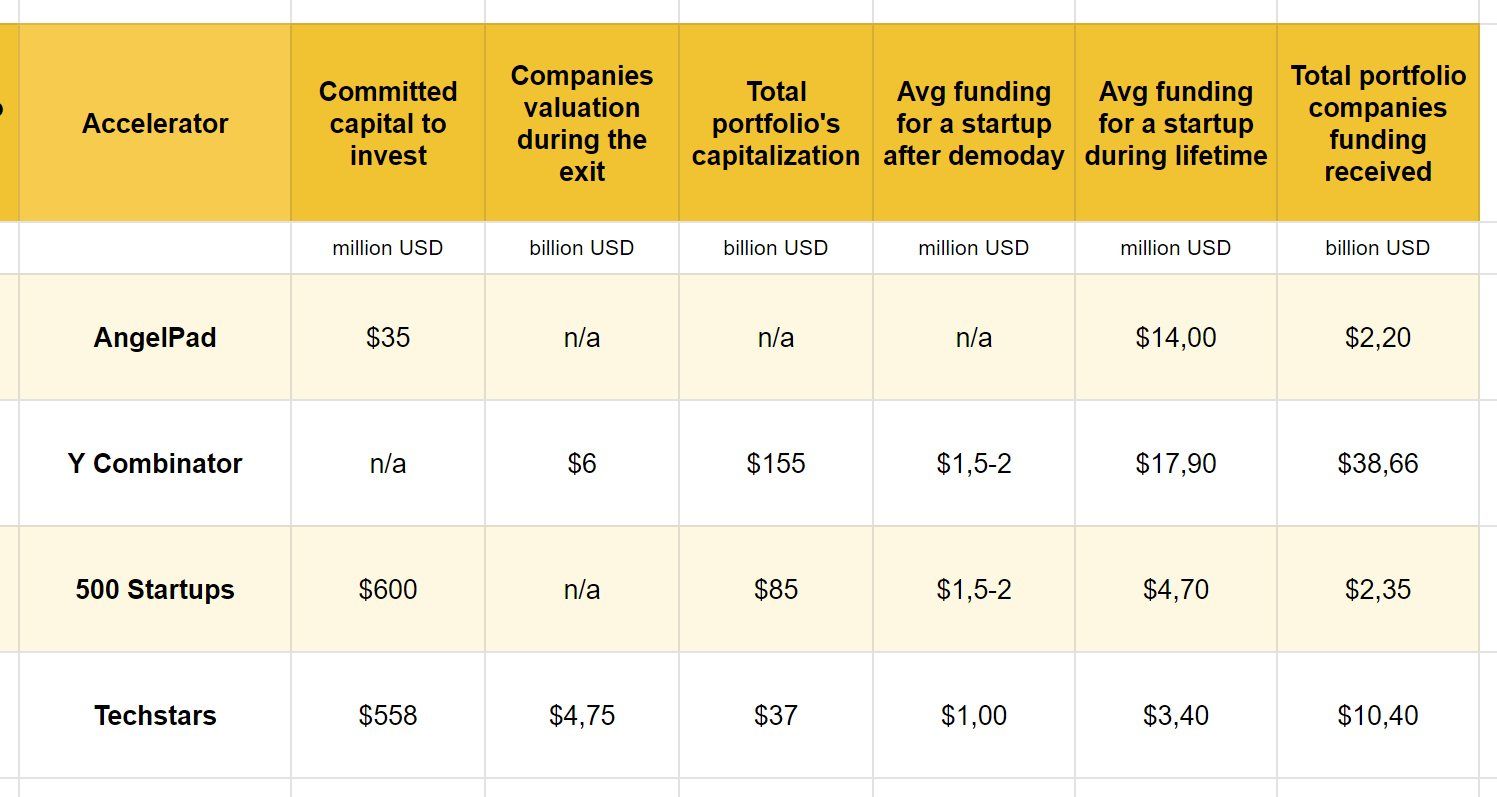 Individual companies received an average of $17.9 million, $4.7 million, $3.4 million and $14 million in investments over the entire period of activity accordingly. These figures are approximate based on research on aforementioned venture capital sites such as Crunchbase and may not include undisclosed deals.

The primary goal and result for a startup are to deliver revenue to investors, so it is important to include in this review the number of exits. Selling a startup to a large company or going public allows investors to sell a stake in it.

Y Combinator made 757 exits for approximately $6 billion. According to public data, Techstars has 583 exits for a total of approximately $4.75 billion. For 500 Startups, the number of exits was 803, while AngelPad boasts 72 exits of its alums. 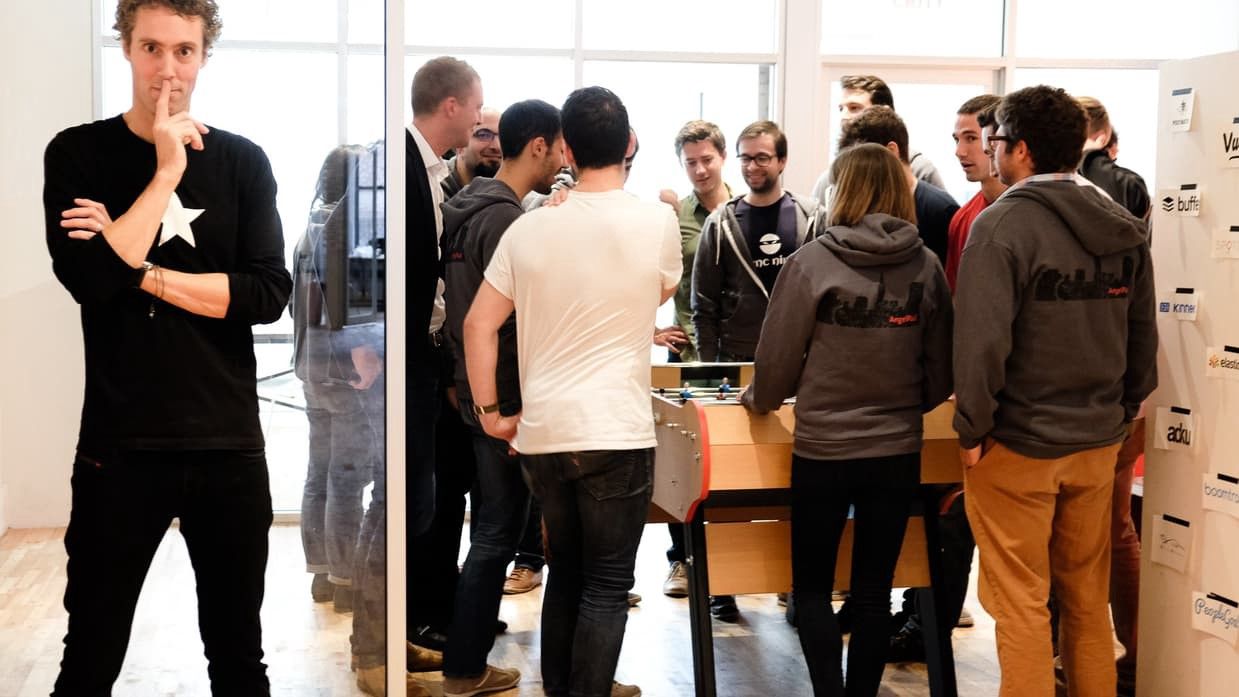 After Demo Day, startups at Y Combinator and 500 Startups raise an average of $1.5 million-$2 million, and for Techstars that number is about $1 million. No data is available for AngelPad.

According to Terrence Yang, co-investor of more than 60 Y Combinator alumni, 90–95% of the participants in each set of this accelerator receive investments. This proves that being accepted not only gives startups new connections, but also a boost in perception, serving as a positive indicator for investors that a young company has great potential.

What are the selection criteria and which program to choose?

For the initial selection, you must have an excellent-to-fluent command of the English language. Your questionnaire should be specific, no a copy-paste answers here, of course, you need an idea and an understanding of its implementation.

Citizenship and other parameters do not matter. These accelerators are also held by companies that have founders from all over the world. For example, Y Combinator alumni come from 53 countries, and 500 Startups’ come from 75 countries.

Y Combinator focuses on fanatical geeks with a vision, self-learning on the fly, non-trivial problem solving, and acquiring and engaging users with the product or service.

A strong benefit of 500 Startups is that they boost startups with access to a team of experts to build a viable idea, for companies that have a desire to conquer the American market and no experience setting up a company in the United States.

For those whose business is concentrated outside of Silicon Valley, the regional Techstars programs are most suitable. If you’re looking for quality, focused work with a qualified mentor, AngelPad is your go-to.

Statistics show that AngelPad receives 4,000 applications annually. And according to unconfirmed reports, Y Combinator receives 27,000 applications, Techstars gets 12,000, and 500 Startups a total of 18,000 applications. Less than 1% of applicants are accepted into the programs.

These four startup programs don’t always make sense for everyone. Some accelerators provide free participation or do not require a share. Before embarking on a long journey, research what’s best for you and your idea by watching lectures from the founders of Y Combinator, the creator of Gmail and others, available on YouTube.

All data is current as of September 20, 2020 unless otherwise indicated. 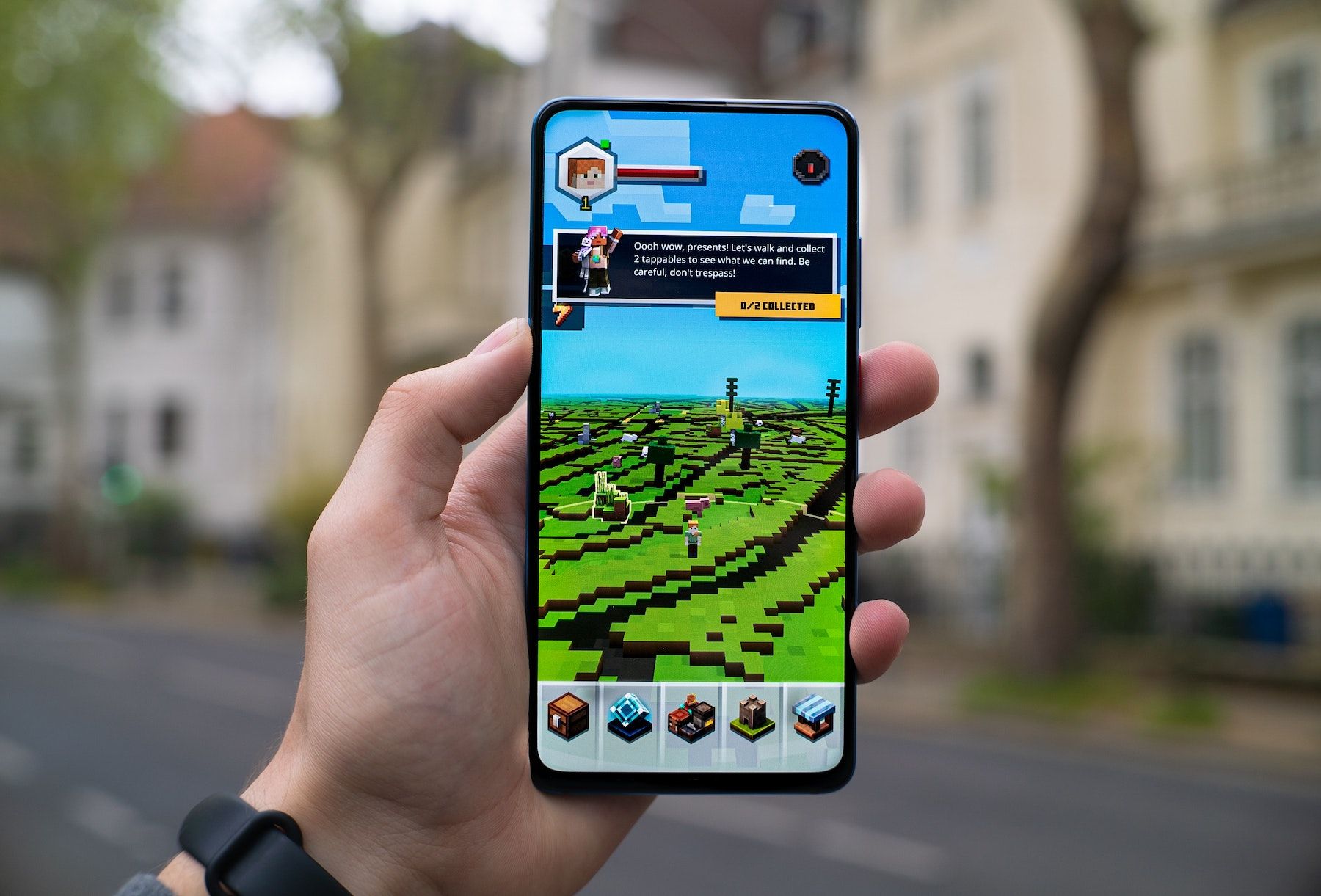 How To Get 700+ Github Stars in One Week 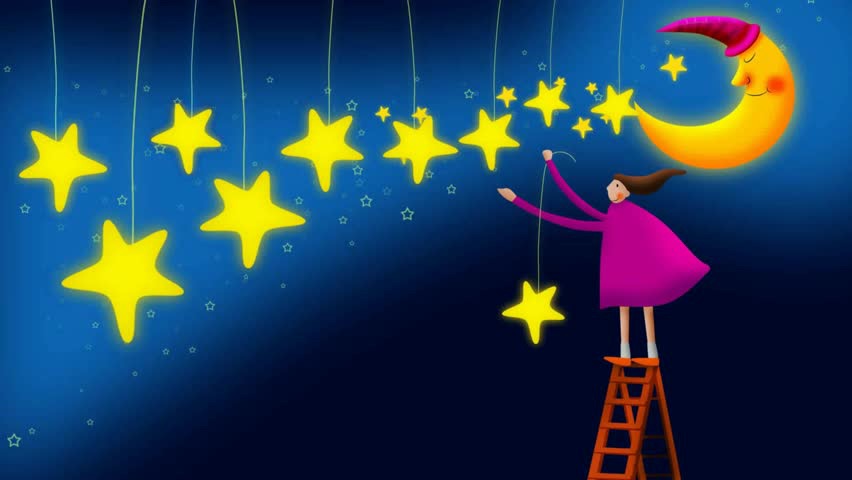