The Productivity Paradox: How Working Less Will Make You More Productive

We all want to get a lot of meaningful work done. It’s natural. Nobody goes to work and says, “Today, I don’t want to make any progress at all. I want to get as little work done as possible. I will work, but I’ll try to achieve absolutely nothing.”

Okay, maybe there are some really dumb people that are like that. Most of us, however, realize that getting work done and accomplishing stuff feels good and helps us live a more enjoyable and successful life. The never-ending challenge is:

How do we get more meaningful work done?

Most people simply put in more time. Instead of working for 8 hours they work for 10 hours, or 12 hours, or 14 hours. Does it work? Kind of. But there’s a better, less painful way. One in which you work less, but accomplish more. Let me explain…

Why Just Putting In More Hours Is The Wrong Approach

If human beings were machines, then putting in more hours would work perfectly fine. A machine produces the same hourly output whether it’s been working for 5 hours or 15 hours.

Human beings, however, are NOT machines. Whether we’ve been working for 5 hours or 15 hours on any given day makes a tremendous difference. Why? Because we don’t have endless energy, willpower, concentration, focus, and other ingredients we need in order to produce work.

Unlike machines, we experience so-called diminishing returns. The more hours we work, the less productive each consecutive hour generally becomes.

Putting in more and more time becomes ineffective after a certain threshold is reached — once your levels of energy, willpower, concentration, and focus are too low you’re just not very productive anymore.

Now, you may interject, “So what? Even if I get just a little bit of work done in hour #12 of my day it’s certainly better than not getting any work done at all!”

Meh, not really. You see, every hour of work means you’re sacrificing that time for other activities. Silly enough, and this is where it gets interesting, most of us sacrifice productivity-boosting activities such as sleep, napping, meditating, and exercising for putting in more hours of work.

What if, instead of working more hours (while suffering from diminishing returns), we would use that time for productivity-boosting activities instead?

By doing that we would switch out some of our least productive hours with activities that increase our productivity per hour. We would work less hours, but live richer and drastically increase our average work output per hour.

Here’s a hypothetical example showing how to work less, but get more done:

In the “work less, achieve more” work schedule, the person only works eight hours per day and uses the other four hours for productivity-boosting activities such as napping, exercising, or meditating. These activities help him achieve a higher work output per hour ranging between eight and thirteen (he’s also more productive in the beginning of the day — work outputs of 10, 13, and 12 in the first three hours of his day –, and less productive in the last hours of the day — work outputs of 10, 8, and 8 in his last three hours). The total work output during his eight-hour workday is 83 units.

Check out the following illustrations. They’ll hopefully clear things up if my explanation wasn’t sufficient:. Just look at the graphics long enough and you’ll get what I tried to convey…

Bottom line: I believe we’re better off increasing our average work output per hour, rather than just putting in more and more hours.

I get it. You may be skeptical, “Are there really activities that have such a big impact on my hourly productivity? So that it’s worth doing them over just using that time for work?

You bet there are. Let me convince you. Here are 5 productivity-boosting activities to do instead of putting in more hours of work:

Many of us sacrifice sleep for work.

And while this may seem to be working quite well, science says otherwise. Studies show that sleep deprivation will make you unproductive, unhappy, cranky, moody, and bad at remembering stuff. Chronic insomnia is even so bad that it will literally SHRINK your brain.

Getting stuff done in a sleep deprived state takes you approximately 2–3 times longer than if you had slept enough. Sacrificing sleep for work just doesn’t make sense.

One interesting study found that male basketball players who were instructed to sleep 10 hours a night improved their performances dramatically: three-point and free-throw shooting each increased by an average of nine percent.

Getting enough sleep will make you a more productive, friendlier, and happier person. Heck, it will even help you skip a class or two!

Meditation is the #1 tool to train your mind.

It’s scientifically proven to increase your ability to focus, concentrate, and pay attention. Plus, it increases your creative potential, your memory, your ability to think outside the box, and even your ability to multitask (which doesn’t make multitasking a good idea, though!).

Meditation is shown to literally increase the size of your brain. For example, brain areas related to focus and paying attention as well as areas related to self-control, positive emotions, and emotional regulation all grow bigger with meditation.

Cutting down on some unproductive work time and using it to meditate instead is certain to boost your productivity.

If you don’t know how to get started, here’s my suggestion:

By following these steps you will build the habit of meditating on a daily basis.

“In an ideal world, all humans, including you, would nap.”
— Sara Mednick, leading nap researcher

Research shows that napping can enhance performance by 34% and overall alertness by 54%. It also improves subjective sleepiness, performance level, self-confidence, and your ability to multitask.

One particularly interesting study found that 60- to 90-minute naps improved memory test results as fully as did eight hours of sleep (!).

Napping is a great way to reload your levels of willpower, concentration, energy, and focus which are all declining over the course of your work day. It’s like injecting some caffeine in the middle of a marathon.

“Exercise is the single most powerful tool you have to optimize your brain function…exercise has a profound impact on cognitive abilities and mental health.”
— John Ratey

Sacrificing exercise for working more is one of the dumbest things you could ever do. Why? Because exercise is like super fuel for your brain. Just look at some of the research-backed benefits it has:

It strongly improves academic performance, boosts creativity, improves cognitive functioning in areas like planning, attention, concentration, memory, and organization. It also protects your brain from aging, increases the number of dopamine receptors in your brain, stimulates the growth of new neurons, and literally increases the SIZE of your brain.

Your brain just works infinitely better if you exercise and move your body throughout the day. And I don’t need to tell you that a better-functioning brain is good for your productivity.

“Who needs a freakin’ lunch break?! That time is better spent working. You can eat something at your desk and simultaneously get some work done. That’s killing two birds with one stone! Fuck yeah!”

Seriously though, not taking any breaks during work will not help you get more work done. En contraire: Research shows that taking breaks is highly beneficial for your productivity.

For example, a study in the journal Cognition showed that people can maintain their focus or vigilance much longer when their brains are given something else to think about every 20 minutes.

Neuroscientist Mark Waldman supports this idea of super short breaks every 20 minutes: “Our research has found that taking 2–3 breaks during each hour to consciously relax, stretch, meditate, or do something pleasurable –even for 10 seconds –will reduce stress, enhance your awareness, and significantly boost your concentration and productivity.”

And also longer breaks of 15–30 minutes are proven to be beneficial for your performance. Researcher K. Anders Ericsson studies elite performers, including musicians, athletes, actors and chess players. He has found the best performers in each of these fields typically practice in uninterrupted sessions that last approximately 90 minutes followed by 15 minute breaks.

Other research by time-tracking app Desktime found that the most productive people work for 52 minutes, and then take a break for 17 minutes.

Instead of working for 4 hours straight we’re better off just working for maybe 3 hours and using the other hour for strategic breaks. (Breaks that can be used for napping, exercising, meditating, etc.)

We Could Go On…

There are a bunch of other activities that make you more productive, and that you could do instead of just working more hours.

Especially planning your day comes to mind. Productivity expert Cal Newport is a huge fan of detailed planning and dedicates a fair amount of time to this practice (time that could be used for working!) as he explains on his blog:

“Sometimes people ask why I bother with such a detailed level of planning. My answer is simple: it generates a massive amount of productivity. A 40 hour time-blocked work week, I estimate, produces the same amount of output as a 60+ hour work week pursued without structure.”

Other things you could do are spending time in nature, taking vacations, going on cool trips, doing yoga, or just generally doing something that’s fun and creates positive emotions. These are all activities that are proven to make you more productive.

FACT: Most of us aren’t fully satisfied with our current levels of productivity. We would like to get more and more meaningful work done in less time.

Today, we looked at two approaches of achieving this goal:

The WRONG approach: Just putting in more and more hours. Why doesn’t this work? Because you’re not a machine. You don’t have endless willpower, energy, motivation, or focus. As you’re running out of these your productivity per hour will drop drastically — you’re getting diminishing returns for your time and effort (and your opportunity costs get higher and higher).

The RIGHT approach: Swapping out your least productive work hours for productivity-boosting activities such as sleep, napping, exercising, meditating, or taking strategic breaks. These activities are proven to increase your average work output per hour. And because your average productivity per hour is higher, you need to work less.

Want additional strategies to become more productive? Then download some of my top productivity hacks by clicking the link below:

My Top 7 Productivity Hacks to Get More Done (free PDF)

How to Identify and Stick it to Decision Fatigue 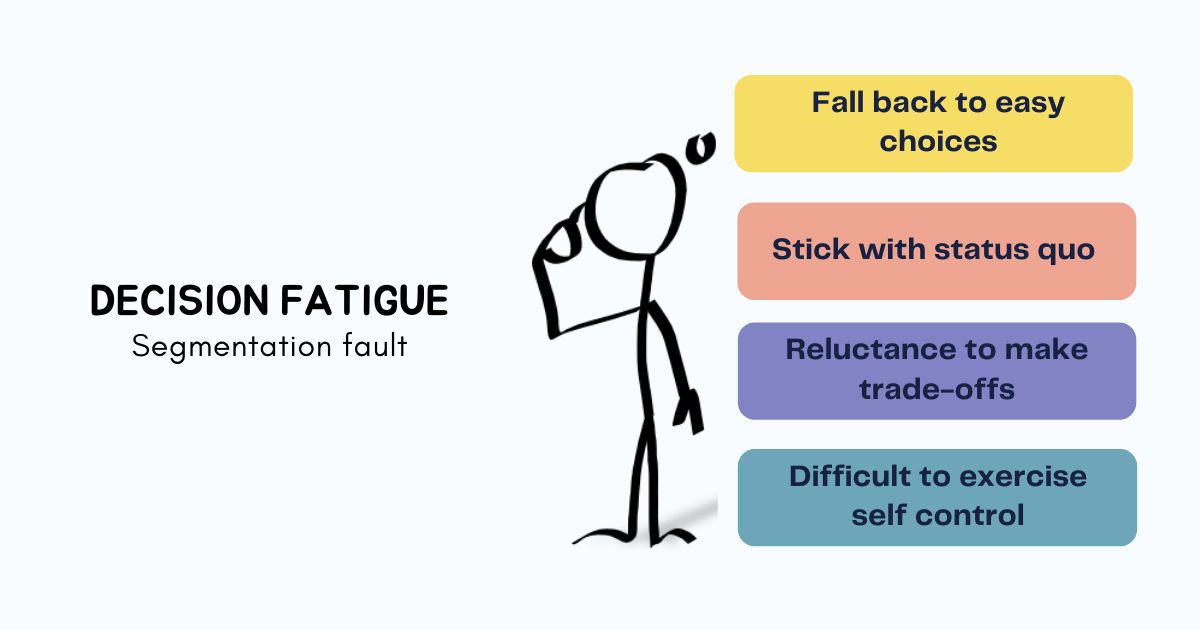