The Good and The Bad Examples of Blockchain Partnerships 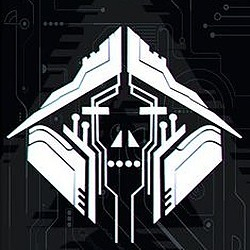 Blockchain technology is considered to be the fourth industrial revolution and the next big disruptor, which genuinely can create a significant positive impact on millions of lives. While still in its infancy, blockchain technology can reduce paperwork, streamline the process and improve the quality of life. Irrespective of all these goodness and positivity, here is a dark side to crypto as well which fewer people are aware of.

Being in crypto space, you would have heard about projects like Bitcoin, Ethereum, Cypherium, Aelf etc and most of these projects are ensuring to add a lot of positive value to the society, helping people to have a better and meaning full life.

On the other hand, we have projects like Centra, Pincoin and Arisebank which had scammed thousands of investors with 100’s of million USD, breaking trust as well as creating a negative viewpoint of crypto as a whole.

All these dead coins followed a similar pattern before it vanished or died off. Manipulate Coin price via various methods then execute the pump-and-dump scheme. A lot of gullible investors rushed to these pumps thinking to make easy money and after a point, the price crashed, leaving them penniless.

These are the stories of dead or scam project. But some existing projects try to artificially inflate the price of the token to give a false sense of hope to the traders who just asses the token from a trading viewpoint only. Some of the tricks include Wash Trading, Pump and Dump, Constant Shilling, Coin burns and most important Fake Partnerships.

It’s a known fact that a majority of retail investors still consider crypto as a shortcut to “get rich fast type” of investment avenue. They keep flocking to projects which they see making are making news. One of the most organic ways to improve the goodwill of a project is via Partnership announcements. The big the better.

In the past, we have seen ample examples of these kinds of bad behaviour. In 2018, an ICO project carVertical came up with the news that they have partnered with BMW. This news boosted the coin to a 200% jump in carVertical tokens. However, BMW explained that there is no official partnership and carVertical were just using a BMW’s software that is widely available to any third parties.

Another one was by Einsteinium- EMC2(Nov 2017) which started to build a huge suspense campaign, that they will be releasing a ”mind-blowing announcement” within the next month. As a result of this campaign price of Einsteinium jumped 500% in just a couple of days and the so-called ”mind-blowing announcement” was just a change in their mining algorithm to make it be ASIC resistant. Price crashed as usual.

Another classic case was Tron. It was rumoured( Spread by Tron Supporters itself) that Tron was going to have a partnership with Alibaba. Justin Sun, CEO of Tron was also twitting about a huge partnership in the pipeline which started to move the price of Tron to boom. Later that news was found to be fake as well.

These were the stories from 2017 and 2018, a time in which the majority of the retail investors were naive. A lot of changes happened, as investors started to get more information and began to understand all these fake noises. If you think these kinds of bad behaviour reduced, then you are wrong,

On May 27th 2020, Theta Labs came out with the announcement that Google has Partnered with Theta Labs as Validator Node and Launch Partner for Theta Mainnet 2.0. Later on, this was heavily promoted via various social media channels that Google is teaming up with Theta Labs, in a move meant to help the video delivery network, onboard users, through Google Cloud.

Based on Google news, both Theta Tokens and TFuel started to pump and did 10x in a couple of days.

This didn’t last long. Notable blockchain researchers like Larry Cermak (Director of Research at The Block) called this bluff, via a series of tweets. 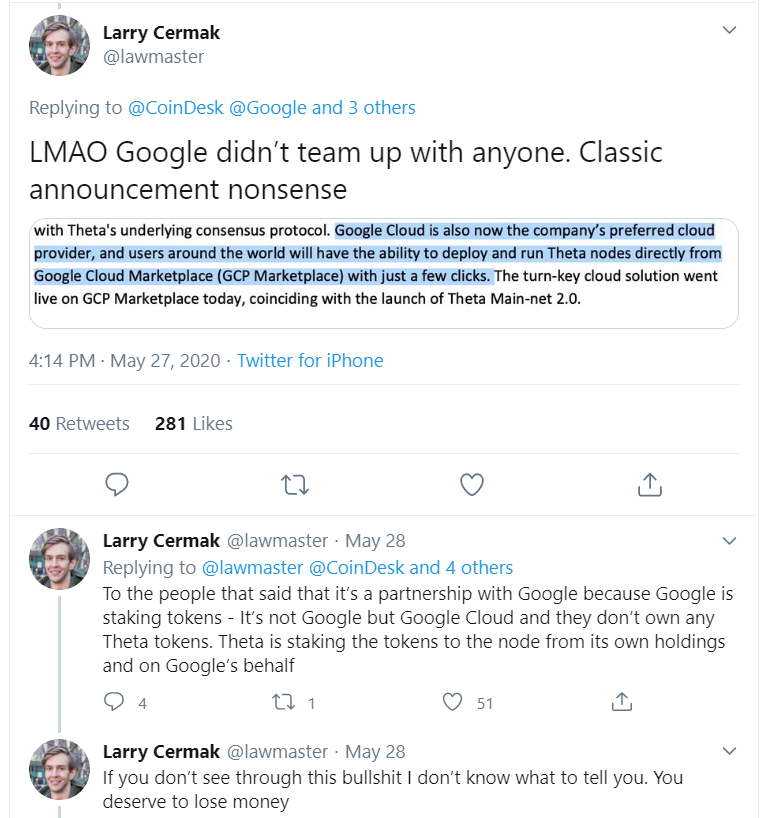 As usual, the price started to dump, once this fake news was called out.

This doesn’t mean that all partnerships announced are fabricated. There are still hardworking projects in the blockchain world, that have come up with genuine partnerships even with likes of Google, Amazon etc and one of the best recent example is the partnership between Google Cloud and Cypherium, an Enterprise Blockchain Platform.

Cypherium is an enterprise-ready blockchain project, which is designed to be highly scalable and robust which utilize a hybrid design that features a joint Proof-of-Work (PoW) and HotStuff (Also adopted by Facebook’s Libra) consensus mechanism that can allegedly achieve thousands of transactions per second without sacrificing decentralization.

With any cryptocurrency investment, it’s your money and it’s your responsibility. Take everything with a grain of salt, look into things, do your research and wait until things are confirmed. Do not rush into what could be another non-existent partnership or not so mind-blowing announcement which will make you lose money.

Disclaimer: This article is not intended as investment advice. You should always do your research and invest your capital wisely. I don’t own the token, neither will I be rewarded in any way for writing this article.

Can GitHub Activity Be Used as a Metric to Evaluate Blockchain Perf...