The Evolution Of The Bitcoin/Blockchain Narrative 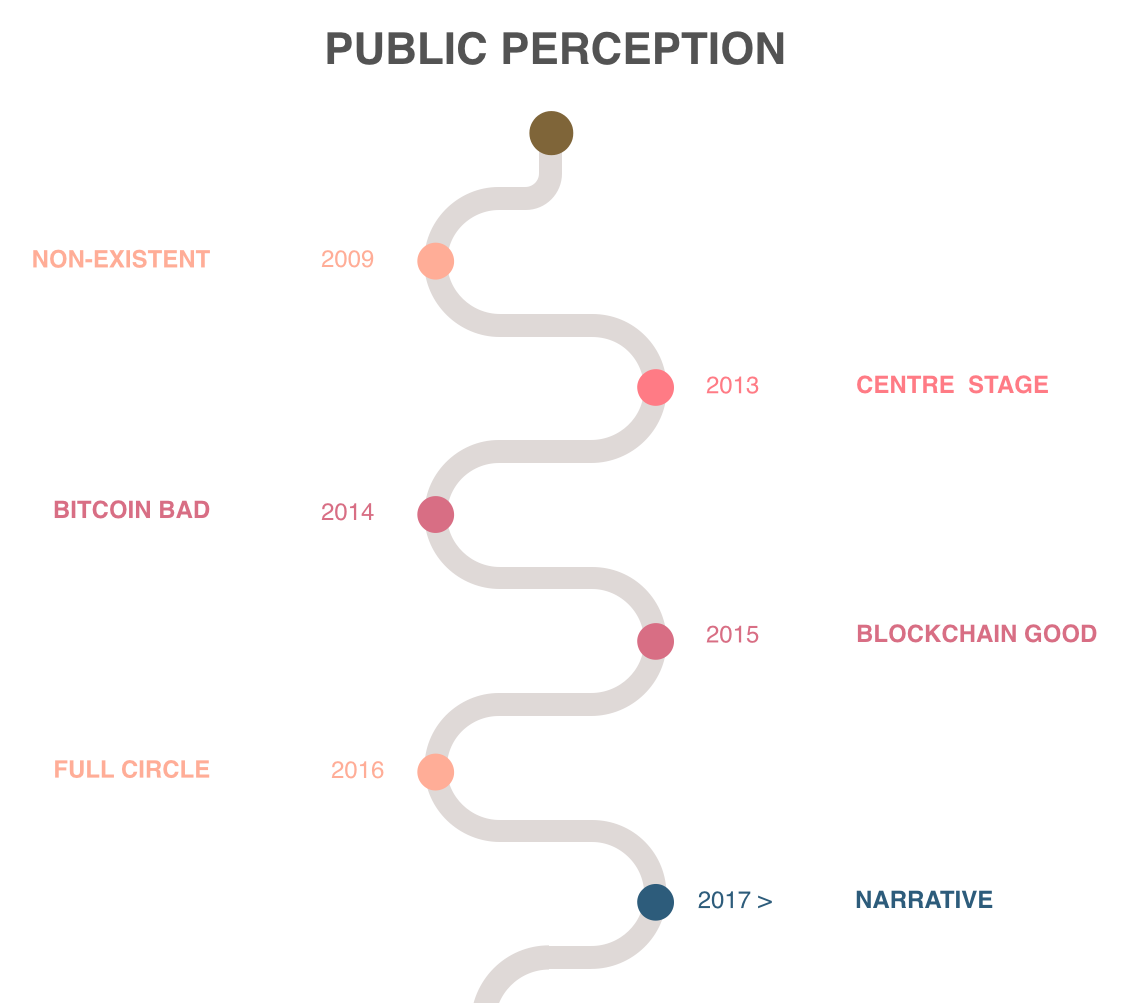 Last month I spoke at the Oslo Blockchain Day about the perception of cryptocurrencies and blockchain over time. This article is an iteration of that talk.

In 2009 when the genesis block was mined, no one aside from a select few crypto fanatics knew about bitcoin. It was non-existent in the minds of the average person. At this point the price of Bitcoin was zero Dollar. Soon someone paid 10,000 bitcoins for a pizza and this worthless thing suddenly had economic value. As a side note, this point where non-economic things get economic value is fascinating. It happens in all types of digital economies and it questions how one thinks about value creation. For instance, in game environments inflation and economic incentives automatically emerge whether you plan for it or not — nature of the beast I suppose.

Soon someone paid 10,000 bitcoins for a pizza and this worthless thing suddenly had economic value.

The following years Bitcoin existed in the vacuum of a small corner of the Internet until it took centre stage when it surged to ~$266 in 2013. The sudden shift in awareness required a counter-narrative to temper expectations, the hacks and scams plaguing the market helped. Soon the press got more than they what bargained for with the Mt Gox debacle where the Bitcoin bad narrative manifested itself over the initial get-rich-quick enthusiasm. With the bankruptcy of Mt Gox in 2014 we entered the Bitcoin ice age.

Keywords of what an average person on the street would associate Bitcoin with during this ice age is seen in the image above. The ripple effect of this perception hindered startups in their ambition to connect to the existing financial infrastructure and vice versa. To overcome this obstacle Bitcoin was reframed to focus on its underlying blockchain technology. The blockchain good narrative enabled cooperation between parties and sparked the second wave of investments into the industry. As insiders it often made us giggle when we saw another Bitcoin startup reframe themselves as a blockchain startup to rake in their next round. At the same time it opened up people’s eyes and minds to the myriad of problems blockchain could solve in virtually every industry. It was the catalyst of the Altcoin market that as of writing is valued at $23B capturing 43% of the $53B cryptocurrency market.

The blockchain mindset is centred around applying the technology to improve what is already there. In other words, evolutionary steps to increase margins and stay competitive. It’s the safe way to go. It is precisely why most of the banks during this period joined consortiums to soon discover that there is more to the puzzle. While some blockchain companies and financial institutions expanded the definition to an abstraction away from Bitcoin by reframing blockchain as distributed ledger technology — with some abandoning blockchain altogether in the process — , others circled back to where bottom-up adoption is taking place, going full circle.

Banks joined consortiums to soon discover that there is more to the puzzle.

By the end of 2016 it became clear that many proof-of-concepts would fail to move forward to the next stage. Like with other emerging technologies the timeline to go from concept to company-wide implementation was underestimated. And much like the Internet, blockchain is a networking technology. Quick wins to internally improve processes are therefore hard to find and realise, while the permissionless blockchains— when you hear someone say this, think Bitcoin — are from the ground up built collaboratively. To no surprise of any of the cryptocurrency enthusiasts, it is here where we find the most exciting innovations take place and shape.

And as the Bitcoin price is going for the race to the $2000 mark, the question remains how to bridge the cryptocurrency infrastructure and the legacy financial system. The good news is that slowly but surely we are moving in the right direction. Public perception is changing. Average joe is jumping onto the bandwagon with this latest price rise. Financial institutions meanwhile are coming to the realisation that at the very least they have to hedge their blockchain-only strategy with a cryptocurrency plan.

To accelerate this difficult love affair between the startups, the public opinion and the finance industry, I propose that 2017 and onwards becomes the period of the narrative. The narrative that encourages collaboration and cooperation.

Cryptocurrency and blockchain technology hold great promise for our future. They have the potential to fundamentally change the very fabric of our global society. Giving billions of people access to a global financial system can do that, let alone the non-financial use cases that are just seeing the light of day. They can bring about greater transparency to industries that today operate without accountability. They can start communicating with things (Internet of Things or IoT) to let the machines do work for us.

We are only at the early beginnings of what promises to be an incredible ride. Fuelled by advances in other technology fields, the sky is the limit. It is therefore worth shaping the narrative that the technology deserves. One that drives our efforts forward to a larger scale — the holy grail of mass adoption.

If you enjoyed this article, please do share it with your friends and colleagues.