The adaptive cycle as a dynamic map for resilience thinking 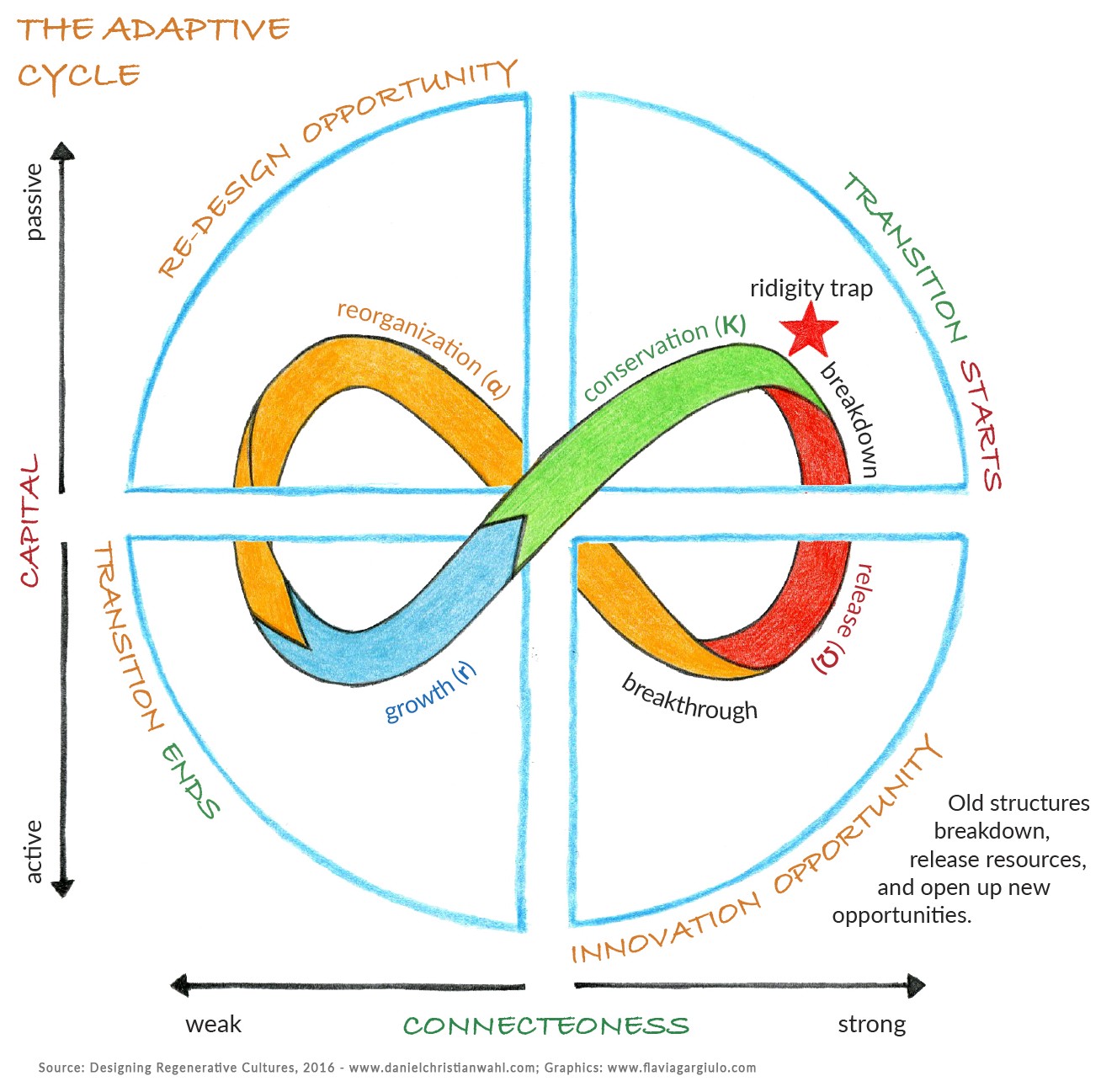 The three aspects of resilience (persistence, adaptive capacity and transformability) describe important capacities of living systems: to resist collapse and maintain vital functions, to adapt to changing conditions (learn and self-organize) and in the case of Socio-Ecological Systems to apply foresight and anticipation to ‘design for positive emergence’ — to transform the system towards increased health and an improved capacity to respond wisely and creatively to disruptions and change.

The theory of complex dynamic systems describes the periodic, rhythmic dance between order and chaos, between stability and transformation as a fundamental pattern of self-organization in complex (living) systems. As any system begins to mature, there is an accompanying increase in fixed and ordered patterns of interactions and resource flows. The system becomes over-connected, or better, the existing qualities and quantities of connections are such that they inhibit the formation of new pathways needed for the system’s overall adaptation to outside changes and its continued evolution. Eventually this leads to rigidity within the system, and it becomes brittle, less resilient, and more susceptible to disturbances from the outside.

At this point, the effects of detrimental run-away feedback loops inside the system can further challenge viability. The often resulting gradual or sudden breakdown of the old order and structures moves the system closer to ‘the edge of chaos’ — the edge of its current stability (dynamic equilibrium) domain. The reorganization of resource flows and changes in the quality and quantity of interconnections within the system at this point create a crisis that can be turned into an opportunity for transformation and innovation.

[This is an excerpt of a subchapter from Designing Regenerative Cultures, published by Triarchy Press, 2016.]

At the edge of chaos, complex dynamic systems are at their most creative (Kauffman, 1995). Ervin László argues in The Chaos Point that the world and humanity is currently at a crossroads between breakdown and breakthrough. If we take appropriate actions, the chaos point could be an opportunity to “leap to a new civilization” (László, 2006: 109).

Understanding the overall dynamics of change we are in the midst of is important. We need to learn to work with rather than fight against these cyclical patterns of creative innovation, consolidation, ossification and eventual dissolution to make room for transformative innovation and renewed creativity.

The adaptive cycle is a model of natural patterns of change in ecosystems and eco-social systems. It consists of four distinct phases: ‘growth or exploitation’ (r); ‘conservation’ (K) of established patterns and resource distribution; ‘collapse or release’ (Ω); and reorganization (α). The adaptive cycle (see Figure 8) is often drawn like an infinity symbol or Möbius loop that joins these four phases.

The journey from exploitation (growth in the diagram above) to conservation is referred to as the ‘fore-loop’ (blue and green part of the loop). It describes the slow and often longer phase of growth and accumulation of resources in the system. Eventually, too much rigid structure, fixed connections and accumulation of resources in the system make it brittle and poised for release or collapse.

The transition from release to reorganization is referred to as the ‘back-loop’ of the adaptive cycle (red and orange part of the loop). This phase is often fast moving and relatively short. In this phase the opportunity for redesign, reorganization and renewal is high, due to the release of rigid structures, established patterns and the redistribution of resources throughout the system. In the adaptive cycle, the creative ‘edge of chaos’ is reached during the beginning of the ‘release’ phase and left at the end of the ‘reorganization’ phase.

During the α-phase the opportunities for and likelihood of creative change is highest. In the r-phase these opportunities for change are tested against each other and one or a few innovations begin to define the characteristics of the transformed system. This structure is conserved and then begins itself to rigidify during the K-phase, until the often rapid and sometimes catastrophic release (collapse) in the Ω-phase takes us back to the creative ‘edge of chaos’ conditions. This offers renewed opportunities for reorganization in a new α-phase and a new adaptive cycle.

The potential for regime shift or transformational change that moves the system into a new way of functioning (which may offer increased resilience and health) is highest during the α-phase. Transformative innovations introduced during this stage have the potential to lift the system into a new stability domain. Design interventions aiming to increase the resilience capacity of a system should use foresight and explore future scenarios to evaluate the potential effects of the intervention or redesign they propose.

In trying to navigate these natural change dynamics at different scales simultaneously, we have to remember that all three aspects of resilience are important. Finding a balance between persistence, adaptive capacity and transformative resilience will determine — to a certain extent — how turbulent, rapid and profound the transition will be.

Since there is a scale-linking connection between systems at different spatial scale and the adaptive cycles of bigger systems tend to move more slowly while the adaptive cycles of smaller systems tend to move faster, we also have to pay attention to what aspect of resilience we are nurturing at what scale and how the different scales influence each other.

[This is an excerpt of a subchapter from Designing Regenerative Cultures, published by Triarchy Press, 2016.]

Related Stories
Subject Matter
Book a Demo. Ship Fast. Rest Easy. LaunchDarkly. by @LaunchDarkly
#promoted
Reviewing The Font:   Pacifico & Tips on How To Use It by @huashu
#fonts
How to Find Ideas for Web Design by @Messaki
#web-design
I Used A 3D Printer To Make My Own Glasses For Under $2 by @ankurb5
#design
Analyzing Blockchain Business Models by @gcuofano
#business
4 Change Management Strategies for Digital Transformation by @anupriya
#digital-transformation