PHP Or Node.Js: Top Tips To Pick The Right Technology For Your Project

I work as a Software Analyst who also loves to share her knowledge through blogs.

The web development ecosystem is enlarging every second, and new technologies and tools are frequently becoming part of this space. Due to the arrival of new tech and tools in this space, developers and programmers have a critical dilemma in choosing the tech stack for application development. 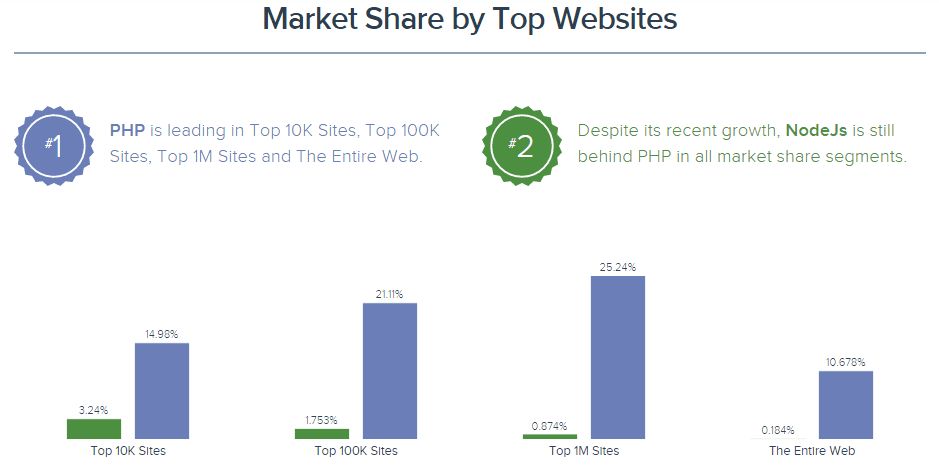 If we look at the web development backed trend, then the usage of PHP and Node.js are increasing significantly. Besides, new technologies have ignited these technologies’ popularity and have created chaos, forcing developers to think about which one they should choose for their next project.

While earlier, JavaScript thrived as a significant trend with PHP for web development and enabled the creation of several incredible application front-end. Though, the arrival of Node.js for backend development has forced developers to pick between PHP vs Node.js.

Suppose you are also wondering which technology is best for your web application development. This article will bring an end to your confusion, as I am driven to discuss both programming languages’ aspects of your web development project.

Who doesn't know about PHP today? It has turned out the most famous programming language of the last two decades for web development. Acronym as PHP (Hypertext Preprocessor), it is an authorized open-source server-side scripting programming language, developed by Rasmus Lerdorf in 1994.

After its inception, this technology hasn't taken a single turn. Instead, it has thrived tremendously. As per a survey by W3Tech, the world's 79$ of websites are developed on PHP. Moreover, its popularity in content management systems such as WordPress, Shopify, WooCommerce, and Drupal has shown its significance in back-end development.

In short, this technology has an unbreakable position in web development, which is hard to defy or ignore. If you want to create a cost-effective application using PHP, you must hire PHP developers for your project

Node.js: A Rising Trend In The Space Of Web Development

Node.js has risen very swiftly in web application development, which makes it a popular programming trend. As an open-source and cross-platform technology.  It enables the usage of a JavaScript runtime environment that executes the JS code outside the browser. It is built on Chrome's V8 JavaScript engine.

Developed and Launched in 2009, it has a wide range of advantages, such as asynchronous programming. Though, the number of a website built with this language accounts for a low percentage merely 0.4%

However, its popularity in this space is irreplaceable and undeniable. Developers are tempted to leverage this technology and are eager to deploy their potential in web application development.

Here are some aspects of Node.Js turned out from a survey:

PHP Vs Node.Js - A Silent Battle

There are millions of PHP developers, and the number of Node.Js developers is relatively low. However, the demands are rising, and the condition has turned out as a significant battle between both of the technologies.

The searches over the internet have a significant share of PHP vs Node.js. Thus, here we will take a glimpse into an in-depth comparison for both of the technologies' significant aspects. So, stay hooked with me here.

PHP Vs Node.js both have their own set of potential for web application development. In contrast, PHP codes are faster and simple, while node coding is a bit complicated. However, there is no need to infuse compilers or converters in Node.Js programming, as the language enables the simple connection to the SQL database and doesn't confine hosting.

However, with Node programming deploying applications and frameworks requires an elaborate preparation and server infrastructure. So, both technologies have their own set of perks and disadvantages when it comes to developing the application.

PHP is well compatible with a MySQL database and enables excellent support for various database models such as MariaDB and PostgreSQL. Moreover, the most cherished aspect is that the code effectively performs databases that are independent of the engines used.

While Node.js contains many libraries for SQL access, it also uses JSON to connect with different types of NoSQL databases.

Moreover, if we look at PHP project compatibility that they can be configured to support JSON, it is best to use JavaScript when you get the code for both browser and server.

Although both JavaScript and PHP can be embedded directly in HTML, they require a compiler to work. PHP has always been easy to install and use from the server-side. It's enabled with the Zend engine, while Node.js is a server-side JavaScript runtime, accompanied by the Google JavaScript V8 Engine.

PHP is synchronous, enabling some APIs that run asynchronously away from an isochronous batch. It uses multi-threaded I / O to carry out various tasks running parallel to each other.

Node.js is asynchronous in nature, signifying that the JavaScript engine runs through all the code at once and does not wait for the function to return.

It employs an event-based, unblocked I / O implementation model. The lines of codes beneath the function will execute, and the procedure will also execute and return the output once done, thus making Node.js fast.

PHP is compatible with the most popular content management systems (like Drupal, Joomla, and WordPress), making it a popular choice as a tool for creating blogs and e-commerce web applications.

Instead, Node.js works efficiently as a tool for creating dynamic, scalable solutions that handle a multitude of I / O operations. The Node can also be expanded on multi-core systems, albeit with more effort.  In Node.Js vs PHP scalability, it is clear the node.js is more efficient. To an application with better scalability and access to resources, you need to hire nodeJS developers deft in bringing innovation live.

The NodeJS vs PHP performance shows up a huge difference. PHP offers stable and reliable performance in web development, compared to the Node.js framework.

However, if you compare the two environments, you'll find out that NodeJs is better than PHP and is much faster due to the USPs like Easy-to-speed V8 engine, Constant connection to the server, and Callback functions that handle many requests at the same time. 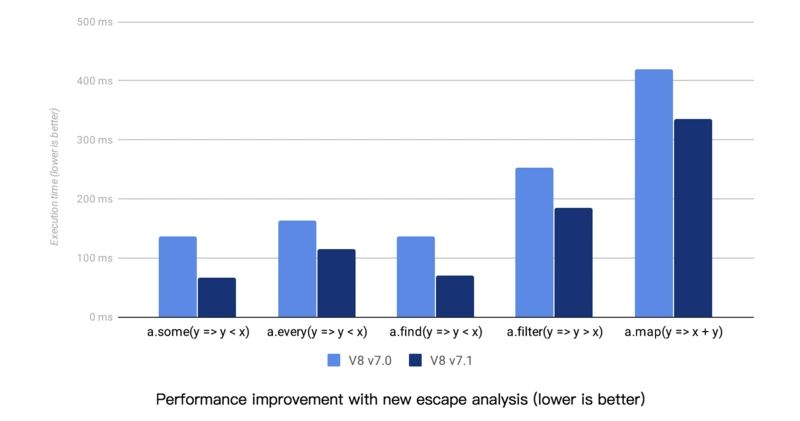 A Look Into Disadvantages & Advantages: Node.Js VS PHP

Javascript is a well-known programming language that makes it significant among front-end programmers; almost every developer knows it well. This programming makes it easier for them to start using Node.js in the background. In short, Node.js is very easy to learn & deploy and needs no time to learn from scratch.

JavaScript is a significant ingredient of web development with Node.Js and PHP. Thus, PHP vs Node Js war majorly has its significance as it can be used to serve multiple simultaneous events. By leveraging Node.js, developers can get far away from scalable solutions that increase computer memory/ CPU usage while making numerous requests.

When we talk about developing software applications with Node.js, there are a few guidelines and dependencies. Lack of rules requiring programmers to choose a specific style or architecture enables them access to more than thousands of different modules. Except this, several professionals are part of Node.js, such as: being similar to JS, Node is much easier to learn, it is ideal when working with large files.

The environment is still a bit immature: Using a complex code structure is one of the things that makes NodeJs disappointing for people.

PHP is also quite stable compared to various programming languages. It has been available within the centre for a long time. Programmers have worked with PHP to make it easier for developers to develop web-based PHP applications. They fixed bugs and issues within a specific time frame for different PHP versions and made them relatively stable.

Ineffective code management: PHP offers developers the freedom to integrate HTML with the language syntax, making it difficult for them to extend PHP applications with new functions. It becomes even more challenging to manage icons with this large codebase - something JavaScript frameworks hardly find.

Incapable of managing a large number of applications: The technology is not compatible with various applications. It is easy to handle, as it is not a competent standard. It mimics the main features of the Java language.

When To Use PHP Or Node.Js For Your Application Development?

There are so many instances that make it clear that now you should pick this technology and skip the other. Here let's see on what aspects we can make this choice with ease. 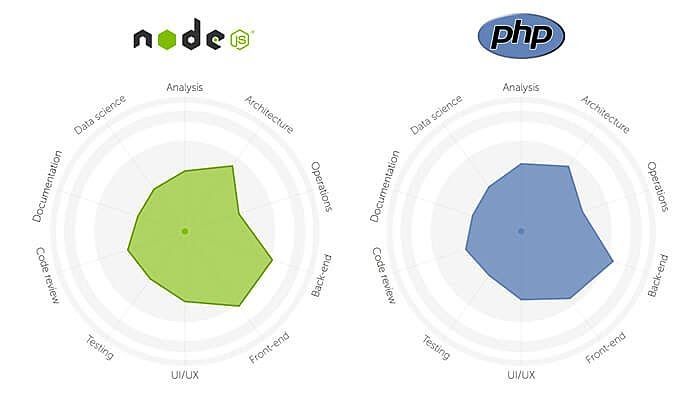 When You Should Use PHP:-

Suppose you do not plan to scale your application to several servers like MySQL, Apache, and more. We can then use PHP for its LAMP stack that enables the usage of Linux, Apache, MySQL, and PHP.

If you are seeking better portability, then there is nothing better than PHP. It is a highly portable programming language with cheap web hosting and can run on almost every platform such as Apache, IIS, and more. Hire PHP programmers that can craft a robust solution by considering the needs of modern users.

When You Should Use Node JS:

There are three significant instances when you can use Node.Js: For the same language across the stack, which is JavaScript, Access to real-time data, and better speed. Nodejs is an outstanding option in all three instances, and it enables the usage of the MEAN stack for dynamic application page development. And have faster code execution speed in comparison to PHP. Based on javascript, you might feel sceptical that this can't be a safe option for data like money transactions. It is not true a highly secured set of libraries makes it exceptionally secure and reliable for real-time data.

The comparison between Node.Js vs PHP signifies that both technologies have their own significant place in web development. You can pick any of these technologies for your project. You can reach a software outsourcing company that enables consultation for technology stack selection for projects for better suggestions.