On the Market Impact of Exchanges’ Hard Fork Policies 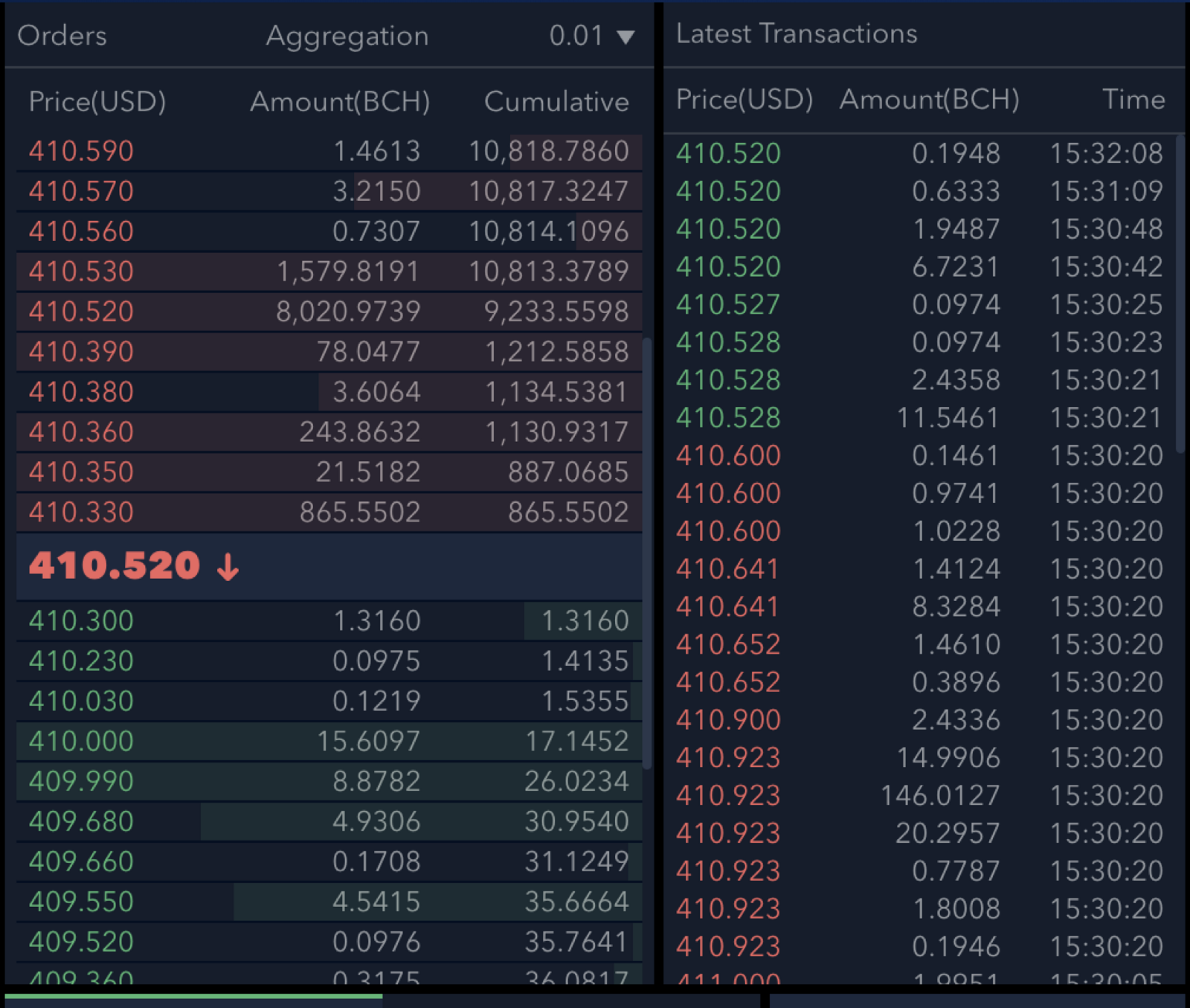 Exchanges’ decisions regarding how to settle existing markets, which coins to claim and distribute, whether to make new markets in forked coins, and much more, can have profound market-wide impacts on the prices of related instruments.

In this piece, I seek to illustrate this point using two examples surrounding Bitcoin Cash’s (“BCH”) possible contentious hard fork on November 15, in which it may fork into Bitcoin Cash ABC (“ABC”) and Bitcoin Cash SV (“SV”). These examples may also help traders think through the appropriate reactions to future policy announcements on future forks.

First, I share how a last-minute change in the settlement time and price of OKEx’s BCH futures caused the price of ABC to crash by over 35% in less than two hours.

OKEx offered three futures contracts on BCH, settling weekly, every two weeks, and quarterly. The latest version of these contracts all settled after the November 15 possible hard fork. On November 9, OKEx announced that its futures would settle on the price of ABC, and that it would adjust its index if necessary to make this the case.

Note that OKEx’s futures were not the only ones representing the price of ABC. Like OKEx, Bitmex announced that its BCH futures contract would settle on the price of ABC after the fork. Additionally, Poloniex and Bitfinex were among the exchanges to open futures markets for ABC and SV.

Even after OKEx clarified that its futures would settle on the ABC chain, the contracts continued to trade at a double-digit percentage premium to ABC futures elsewhere. Arbitrageurs began shorting BCH futures on OKEx and longing ABC futures elsewhere, such as on Poloniex and Bitfinex. Meanwhile, SV continued its strong run over ABC, overpowering any buying pressure that arbitrageurs were exerting on ABC. SV rallied from a low of $50 (9% BCH) on Poloniex on November 9, when OKEx announced that its futures would settle on ABC, to a high of $245 (49% BCH) on November 14.

OKEx Price Limits and the Widening of the Arbitrage

As SV rallied relative to ABC, the value of OKEx’s BCH futures bottomed out at roughly 80% the price of the Index, while the fair price was, at times, 20–30% lower. Traders competed to get short orders filled on OKEx by submitting new shorts at the minimum allowed price whenever the BCH Index ticked down. In the morning and afternoon of November 13 (ET), few were playing this game, and short orders would frequently get filled and even run over by seemingly uninformed buyers. By late evening (~9pm ET), many traders had become aware of the opportunity and, for the most part, the only way to get shorts filled was to use a bot to place them. The following screenshot shows the order book and trading history at this time.

Perhaps a bit strangely, and despite the lack of any depth on the bid side of the order book, these orders were frequently getting filled, with millions of dollars being transacted every hour. Were buyers simply uninformed, were they rogue market making bots, or did they know something that everyone else didn’t?

While these arbitrageurs were filling their shorts, they were also buying ABC in other markets to hedge their exposure.[3] Thus, OKEx’s choice of index and price limits may have played a significant role in halting SV’s momentum and propping up ABC. We can see some evidence for this in what happened next.

The Suspension of Trading and Early Delivery of Contracts

At 3:05am ET, less than 33 hours before the anticipated fork, OKEx suspended trading in its BCH futures markets. OKEx broadcasted an announcement over Telegram at 3:21am ET and over Twitter at 3:22am ET, which stated that it would suspend trading at 3:05am ET and deliver contracts at 4:00am ET, based on the last traded price at 3:05am ET, for all BCH futures. A cynic might hypothesize that OKEx waited so long to broadcast this announcement in its main communication channels to give insiders a chance to dump their ABC hedges first, while maintaining that the announcement was already public.

Over the following hours, arbitrageurs closed their long positions in ABC to offset their newly defunct short positions. ABC plummeted across all markets from a price of $363, at the time trading was halted, to a low of $237, less than two hours later, representing a 35% decline.

The coinciding of the market-wide dump in ABC with OKEx’s announcement to deliver its BCH futures early, as well as the heavy volume traded on those futures, together provide strong evidence that OKEx’s policies were, at first, propping up the price of ABC, until ultimately causing it to dump on the announcement that futures would be delivered early.

(2) Bitfinex’s Uncertain Treatment of the Fork

I will now show how initial uncertainty regarding Bitfinex’s treatment of hard fork distributions led to the heavy opening of short BCH positions, and how Bitfinex’s eventual clarification of its stance led to the closing of those positions and the immediate rise in the price of BCH of more than 8% in less than an hour.

We know now that Bitfinex ultimately announced on November 13, two days before the anticipated fork, that it would create futures markets for ABC and SV, and hold borrowers and short traders responsible for delivering both ABC and SV by December 31, 2018. However, to understand the impact of this announcement on the price of BCH, we must first consider what traders were thinking before this announcement.

Before the public announcement on November 13, traders naturally looked to Bitfinex’s treatment of previous forks to hypothesize how it might treat the next one.

Below are brief summaries of Bitfinex’s announcements regarding its treatment of each of the last three major Bitcoin forks:

Bitcoin Cash:
Margin long/short traders did not receive/owe BCH. Lenders and traders long spot received BCH. To make up for any discrepancy caused between the amount of BTC lent and long spot and the amount of BTC in total deposits, BCH would be distributed according to a “socialized distribution coefficient” equal to outstanding margin longs divided by outstanding margin shorts. More shorts than longs, for example, would cause BCH to be distributed at a less than one-to-one ratio to qualifying BTC.

Bitcoin Segwit2x:
Bitfinex created futures markets for both post-fork versions: BTC (incumbent BTC) and B2X (Bitcoin Segwit2x). At the time of the fork, borrowers would owe lenders both BTC and B2X. This fork was eventually cancelled. The policy was announced on October 6, 2017, more than a month before the anticipated fork date of November 16, 2017.

Following Bitcoin Gold as a precedent, traders likely anticipated a strong chance that Bitfinex would announce a last-minute futures markets for ABC and SV (as we now know was ultimately the case). In this event, it would seem likely that borrowers would owe both coins, since that was the case both times Bitfinex created futures markets (Bitcoin Gold and Bitcoin Segwit2x), and the futures markets allow borrowers to hedge their exposure, making it more reasonable to hold them responsible for owing both coins.

However, there was also a non-zero chance that futures markets would not be announced. In this case, it would seem plausible that Bitfinex would take a similar approach as it did when Bitcoin Cash forked from Bitcoin, and follow most other exchanges by counting ABC as the post-fork BCH. BCH would become ABC, margin traders would not owe or receive SV, and lenders and traders long spot would receive SV according to the socialized distribution coefficient.

Of course, these two scenarios are not collectively exhaustive of all possibilities, but it’s relatively clear that there was some chance that margin short traders would not owe SV and a near certainty that they would not owe more than one SV per BCH. Thus, short traders owed, in expectation, less than one SV per BCH borrowed, but they could short BCH on Bitfinex at approximately the same price as the price of BCH elsewhere, where each BCH represented one SV plus one ABC.

Consequently, traders entered short positions for BCH on Bitfinex en masse, likely hedging with commensurate long positions. Note that traders may have hedged with some combination of long ABC (such as on Poloniex) and long BCH, depending on their beliefs about the likelihood that shorts would owe SV, their beliefs about their ability to react quickly to an announcement from Bitfinex, and perhaps their desire to speculate differentially on ABC and SV.

At 5:48am ET on November 13, Bitfinex posted an article and announced to its Telegram that shorts would owe both ABC and SV. As shown by the charts below, shorts immediately started closing, causing the price of BCH to shoot up from a low of $514 to a peak of $557, representing an 8.4% increase in less than an hour. Traders arbitraging BCH across exchanges, of course, dampened this effect and caused the price to similarly rise on other exchanges.

These stories illustrate the importance to traders of paying close attention to policy announcements from exchanges regarding their treatment of markets related to expected hard forks.

These stories also demonstrate the importance for exchanges to transparently publicize policies early on, ideally before prospective forks become well-known and traders begin betting on how exchanges will form their policies. Unexpected changes in the treatment of products related to hard forks can produce undesirable market impacts and increase distrust between exchanges and their customers.

[1] The fair value of these contracts was approximately the expected price of ABC as represented in other markets, such as Poloniex’s ABC futures, except, primarily, for differences in perceived counterparty risk.

[3] While it’s beyond the scope of this piece, it’s worth noting that there are, of course, many other risks that these arbitrageurs might have been seeking to hedge, such as their long exposure from the BCH collateral required to short OKEx BCH futures, as well as the exposure to Tether from long positions in ABC on Bitfinex (perhaps hedged using USD/USDT on Kraken).

—————
Thanks to Lucas Adams for endeavoring through many of the aforementioned trades with me in real time. Thanks as well to Ian D’Souza, Samuel Trautwein, and Gabriel Bianconi for feedback on this piece.