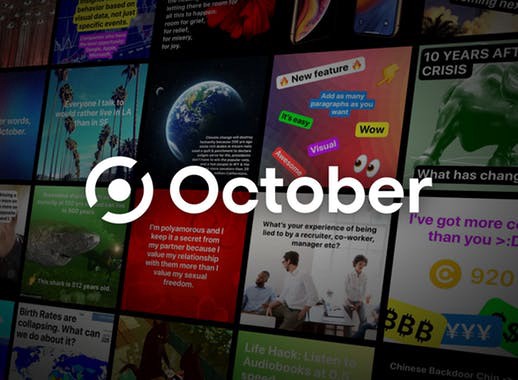 The place for creative conversation.

A week ago I was invited to participate in a brand new social media app called October. Since the UI looked nice and the design philosophy seemed thoughtful, I decided to give it a try. After a few days of interacting with the community, I realized that this October thing actually had a lot of potential. It feels like a long lost sibling of Reddit and Twitter that’s had enough time to mature! In this article, I will explain what (I think) makes October unique and worth paying attention to.

October is a new social network that combines pseudonymous posting with an attention economy based around coins. It is built by experienced economists, security researchers and mathematicians. The goal is to create 1) a safe environment for good discussion, and 2) a place that increases in quality as more people join.

The name “October” comes from the team’s approach to solving the “Eternal September Problem”, that is the problem of social networks getting worse as more people join. They will be addressing this issue as October grows by splitting channels (think subreddits) and reorganizing who follows who based on voting behavior.

The big problem anonymous sites get is abuse, and the problem everyone deals with is groupthink. E.g. subreddits and speciality sites get more groupthink as they get bigger.

October thinks the solution to both is figuring out who sees what. They are learning from the voting behavior of users, and can learn who should see what from that. This means that people who troll too much do see consequences. They might see other people who enjoy troll posts... but their targets will not see them.

This also helps with political polarization in that everyone sees content that they might not agree with (and thus expands their horizon), but not necessarily stuff that they are completely opposed to (which would just lead to super tribal highly polarized fights). The key is in managing attention well and building an economy around it, that allows users to help October curate at scale.

October was released 2 weeks ago in alpha-testing and is currently invite-only. Feel free to join the network using my invitation link. Let’s make it a thriving community together!

Related Stories
Subject Matter
Join Free TON Community and Participate Contests! by @Free TON
#promoted
Sustainable Clothes Made From Recycled Plastic by @alahausse
#fashion
How Platforms Like Facebook Can Make Algorithms More Transparent by @jaipaul
#social-media
InvoZone CEO Furqan Aziz on Passion, Failure, and Monday Rituals by @shahmeer
#founder-interview
How AI is Improving the Fitness Industry by @coders
#ai
Dogecoin: Everything You Wanted To Know About This Memecoin Making A Mockery of 'Serious' Crypto by @@nawazmohammed
#cryptocurrency