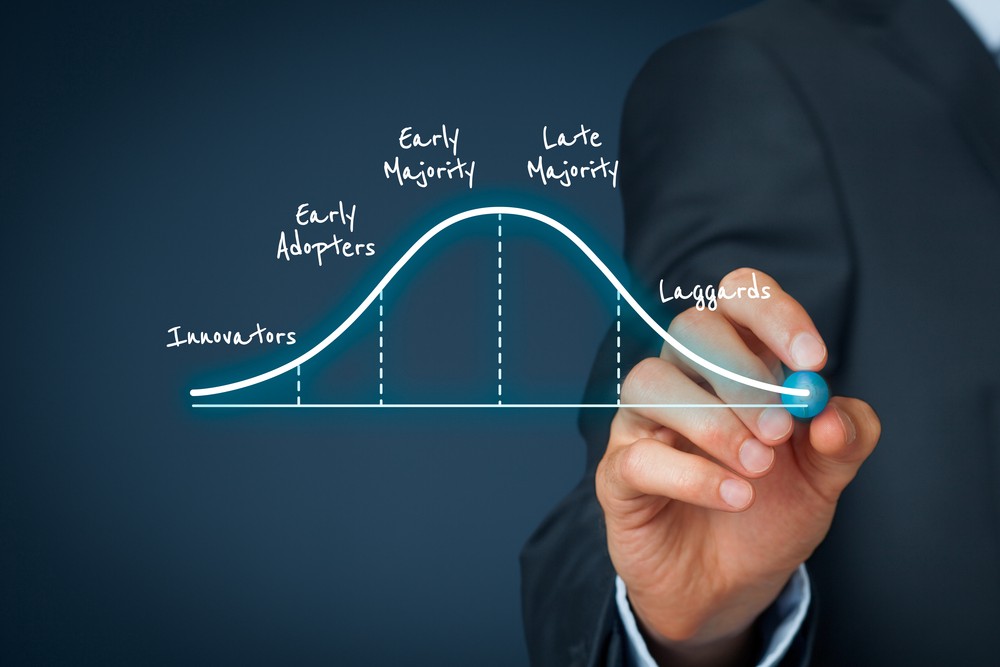 At a recent blockchain conference, an active discussion erupted over determining the current stage of adoption of the cryptocurrency market (CM). We at Mindrock Capital decided to dig deeper and find the answer to this question.

The CM is often measured against another currency market — the foreign exchange (forex) market (FX), which is the largest, most liquid financial market for trading currencies in the world.

The FX has been established for decades and is widely used by central banks, institutional investors and individuals. Since this market is without a doubt mature and saturated, we can conclude that it has reached the final stage of adoption.

In contrast, the CM is young and volatile. Though there is a lot of hype about it, it is still not very well regulated and lacks a proper infrastructure, and therefore large financial institutions are afraid to enter it.

To get more insight into exactly how the adoption rates of the two markets differ, we compared them from two different angles: number of accounts and daily traded volumes (DTV).

Some would argue that the CM is still at the very beginning stage of adoption because the total number of cryptocurrency users (20–26 million wallets) is only a miniscule 0.26–0.34% of the world’s population (7.6 billion).

However, this measure of adoption is unjustified, as we can see by looking at the number of FX traders. In June 2016, FXCM, a leading FX brokerage, provided market access to 130,000 separate customer accounts (0.0017% of the world population). Even if we optimistically project that this number has since doubled or even tripled (rather unlikely, given that there was only a 5% increase from 2015 to 2016), it would still be a small fraction of the number of cryptocurrency wallets.

In fact, the number of cryptocurrency traders is about 200 times larger than the number of FX traders. Therefore, if we measure adoption strictly by the number of accounts, the CM is far ahead of the FX. But common sense tells us this is not the case, so there must be other criteria we should take into consideration.

A better measure of adoption might be daily traded volumes. The cryptocurrency DTV is around $13 billion, which less than 0.3% of the $5.1 trillion FX volume (as of April 2016).

How can this be, given that there are so many more cryptocurrency traders than FX traders? The answer lies in the composition of the two markets. CM players are mostly individuals; large financial institutions still fear the poorly regulated space, FX players, on the other hand, include commercial banks, central banks, hedge funds, corporations and individuals, who together have huge monetary power. In fact, in 2017, institutional trading accounted for 94% ($4.79 trillion) of FX volume.

In contrast, institutional investors had only started to enter the CM by 2017, and they do not have enough assets under management to compete with the FX players. Specifically, by February 2018, just 226 hedge funds had invested in the CM, and the total assets under management (AUM) were $3.5–$5 billion. By July 2018, that number had almost doubled, growing to 406, presumably doubling or tripling the AUM. But even if we highball their current CM AUM at $15 billion, that’s still barely more than 0.3% percent of the $4.79 trillion DTV by institutional investors on FX.

Clearly, by this measure, the CM is at a much earlier adoption stage than the FX.

However, for commercial and central banks there is a number of obstacles that prevent them from investing in decentralized currencies. To do so, they would have to adopt an array of new strategies and regulations. Therefore, they are unlikely to enter the CM until very late in the game, and indeed they may well never enter the market at all.

That leaves hedge funds. That means the critical question becomes: How many more hedge funds must invest in the CM to push into significant adoption?

We will calculate this using diffusion of innovations (DIT) theory and AUM.

Diffusion of innovations theory (DIT) holds that an innovation requires human capital to become self-sustaining. It identifies five groups of adopters: innovators (the first 2.5% of adopters); early adopters (the next 13.5%); the early majority (the next 34%); the late majority (the next 34%); and the laggards (the final 16%). We posit that for a product to become established, it needs to cross the 16% chasm (2.5% of innovators + 13.5% of early adopters) and enter the early majority stage.

How many hedge funds need to invest in the CM to cross the 16% DIT chasm?

The current 406 hedge funds that invest in CM make up 4.87% of the total hedge funds in the world (8,335), which puts them in the early adopters group.

To cross the 16% adoption chasm, then, hedge fund investment in the CM needs to reach $479 billion or requires about 928 more hedge funds to enter the market, for a total of 1,334, depending on the metric we choose here.

Kate Chichikashvili recently joined the Mindrock Capital team as an analyst to do research on the cryptocurrency market. She holds a B.S. in Quantitative Economics and Econometrics from NYU.