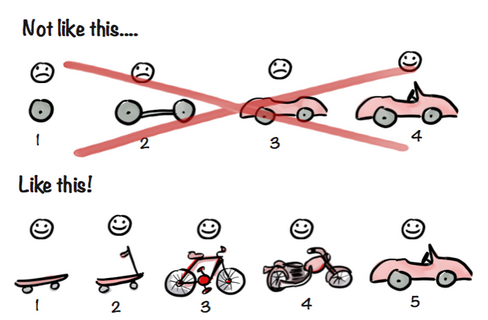 As many of you know, I am currently entering the last 2 weeks of a 12 week coding boot camp at The Iron Yard. As part of that program, during the last portion, we have divided up into groups to work on month long final projects, which should be some sort of a culmination of everything we’ve learned as part of the curriculum. Then, I suppose, it’s off into the real world.

My group, consisting of 4 brilliant developers, has set out to build a game using JavaScript/React & Ruby to help kids learn basic programming skills, which could be implemented both at home and in school settings. There is a wide variety of interesting and challenging projects from each of the other groups during this time as well. One of the biggest challenges in every group is time. With only four weeks, we often need to adjust our goals and priorities. As part of that conversation, a term I hear among our group, and others is MVP (Minimum Viable Product). Basically, we have these dreams of what this project could be, but because our time is limited, we need to scale down so that we deliver something that’s functional.

The problem with MVP is that the conversation is much more interested in the Minimum part, than the Viable.

As I was mulling this over in my head, I came across an article this week, which discussed the difference between MVP and SLC (Simple, Lovable, Complete). While basically the same thing, there are some big differences.

Simple implies intentionality. I have found that we don’t often think about ‘Minimum’ until about 2 weeks into a project, and we are crunched for time. Then the term comes up all the time. “What’s the absolute minimum we can get by with delivering.” The great thing about Simplicity, is that it can be part of the conversation from the very beginning. Even in the planning stages, we can ask, “This would work, but how can we simplify it?” Thinking about it this way can avoid the ‘minimum’ conversation when we are trying to meet a speedily approaching deadline.

Loveable products are ones that people enjoy using.

Viable products may be functional, but not something people enjoy. When we think about a project’s MVP, we rarely focus on a users wants, but much more on a users needs. Remembering to make a project lovable, helps us refocus, and deliver something the client needs to use, but also in a way that they want to use or interact with it.

Completed isn’t the same as Complete.

MVP focuses on finishing. SLC focuses on making something that meets a clients needs. Complete projects aren’t just finished ones. Complete is another word that needs to come up on the conversation early. Instead of asking, “What’s the minimum functionality the client actually needs?” We can begin early, in the planning stages, by asking, “What does this project need to be complete?” From there, it’s easier to prioritize goals, and focus on the users stories that matter the most.

Changing our mindset from thinking about a product’s MVP to it’s SLC can help us refocus our efforts, so we don’t just deliver the minimum, but we deliver something simple, complete and lovable. Here’s a link to the original article as well, and I would love to hear your thoughts on the topic!

I hate MVPs. So do your customers. Make it SLC instead.
Product teams have been repeating the (Minimum Viable Product) mantra for a decade now, without re-evaluating whether…blog.asmartbear.com
Ethan Jarrell | Professional Profile | LinkedIn
View Ethan Jarrell's professional profile on LinkedIn. LinkedIn is the world's largest business network, helping…www.linkedin.com

Related Stories
Subject Matter
Win $2000 by building a web app on Velo by Wix by @Wix
#promoted
How To Set Up tsconfig [Part 1] by @barinbritva
#typescript
React vs Angular: Final Thoughts by @RAHULISM
#javascript
Let's Go! 5 Use Cases When You Need Golang for Your Tech Project by @eugeneborisenko
#golang-development
Apply This Technique To Serve HTML Via Templates With FastAPI by @fastapitutorial
#fastapi
8 Ways to Improve the CLS Score in Google’s Core Web Vitals by @russjeffery
#seo