KYC: the Death of Bitcoin? 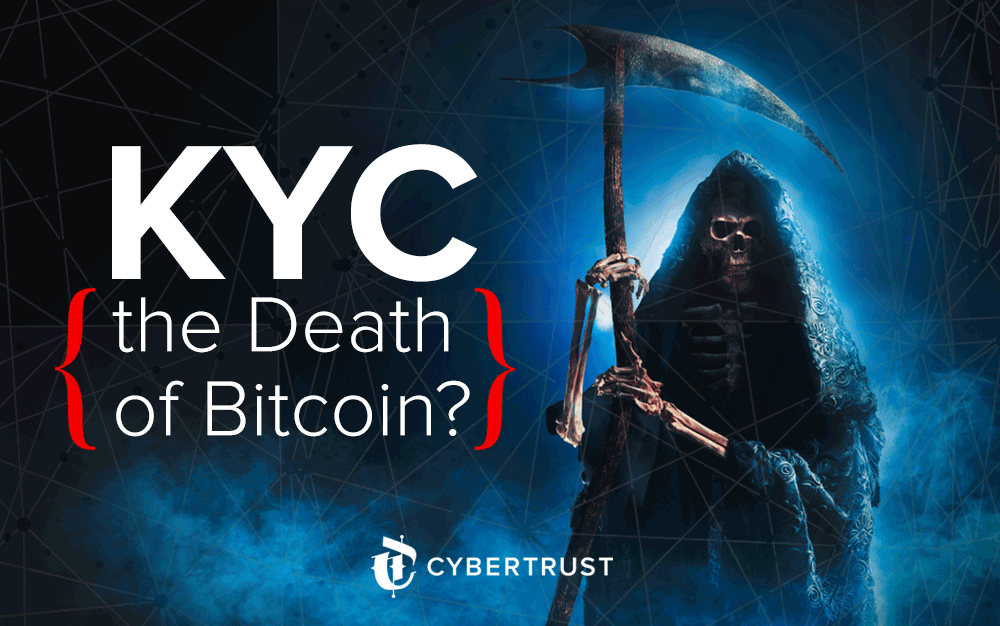 The decentralised and pseudo-anonymous currency of the crypto world, Bitcoin, constantly comes under fire from political factions the world over for some of its more shady use cases. There are those that believe that Bitcoin and other cryptocurrencies can be brought within the current KYC (Know Your Client) and AML (Anti Money Laundering) system, but what does this mean for the currencies themselves?

Unlike with regular money, one doesn’t need to interact with a third party to transfer funds with cryptocurrencies: this is what its decentralised nature is all about. Where there are third party banks overseeing transactions, there is room for a regulator to provide institutional oversight and monitor transactions to curb money laundering, the financing of terrorism and the like.

These banks then bear liability for any transactions that amount to financial crime and the liability costs can run up into the hundreds of millions. As a recent example, the UK Financial Conduct Authority (FCA) slapped a £163 million fine on Deutsche Bank at the beginning of the year for $10 billion worth of funds transfers of unknown origin from 2012 to 2015.

As such, some of the biggest institutions (JP Morgan, Standard Chartered and others) have even prohibited their correspondent banking clients from handling cryptocurrency related transactions to avoid bearing the brunt of legal responsibility.

Since Bitcoin and other “non-traditional currencies” are currently used as a medium of exchange outside the existing regulatory frameworks, institutions are afraid of handling them and this is where companies applying current KYC and AML logic to crypto come in.

With a blockchain wallet address, the open nature of distributed ledger technology makes it very simple to check the amount of cryptocurrency contained within the wallet, just as asset transfers to/from addresses are open and can be monitored with ease. To do so, one simply needs to enter the address into a Block Explorer, such as blockchain.info.

As you can see from the screenshot above, we can see the balance and transaction history of any given address and this is what separates the likes of Bitcoin from traditional currency:

By piecing transaction information together it is possible to flag up transactions from questionable sources, such as assets derived from ransomware (cryptovirology). This is where crypto KYC service providers come in.

These service providers check the sources of assets and monitor dubious address transactions; if a user has received cryptocurrency from a blacklisted address, their account will not pass KYC.

Many crypto KYC services also blacklist cryptocurrency tumblers (mixers) since they are used to obfuscate transactions so that it is problematic to identify the sender address. However, many exchanges now perform this function.

In any case, there are other means of identifying users of cryptocurrency addresses.

For example, if the sender of the assets isn’t using the anonymity network Tor then ISPs can intercept and monitor traffic to work out which transactions are coming from which IP address and which are just being relaying. Moreover, merchants accepting Bitcoin obviously know who the buyer is, not to mention exchanges who handle fiat conversions that implement KYC already.

The question is, then, does identifying Bitcoin holders via centralised authorities defeat the object of cryptocurrency?

I would argue it doesn’t since Bitcoin is pseudo-anonymous, meaning there are ways to identify users without resorting to KYC. However, there are many out there that wouldn’t want others to know their wallet balances and even more non-crypto enthusiasts who wouldn’t want people to know their real world bank balances. This is where mixers (and exchange platforms like ShapeShift) in conjunction with separately held wallets can be helpful.