Key Developer Insights To The State Of The Decentralized Web (DWeb)

Rapidly picking up the pace of development in the 2010s, the decentralized (or distributed) web—better known as the DWeb—is oft-regarded as the technology that will finally empower individuals with the privacy, security, and control that is largely missing from the traditional web we’re all accustomed to using.

Although there has been much progress moving from the centralized traditional web that is dominated by corporations and social media giants, to a decentralized version that suffers from fewer of its weakness, there is still a great deal of uncertainty about the best path forward among DWeb developers.

To help clarify the current state of the industry, we reached out to over 600 individuals working in fields related to the DWeb and used the responses to the insights expressed in our Decentralized Web Developer Report 2020. Here’s the gist of what we found.

The DWeb is in its Infancy

Despite being in development for several decades, the DWeb remains largely incomplete since many of the technologies that will enable a truly distributed internet have only emerged in the last few years.

This infancy is perhaps best seen when looking at the age of the projects working on DWeb technologies. We found that more than half of projects had been operating for two years or less and just 21% were over three years old. Of these, just over half (51%) said their project was still under development, while 29% had launched.

This is in stark contrast to the traditional web, which is dominated by businesses that have long-passed the startup and scaleup stage, and are now focused on maintaining a competitive advantage and marginally expanding their reach.

Still emerging as a potentially disruptive technology, the ideology behind the DWeb is remarkably conserved between survey respondents, as 82% agree that the DWeb is defined as an architecturally decentralized system (no single point of failure), while 64% prefer it to be politically decentralized — such that it isn't controlled by a single entity. Curiously, just 37% believe the D in DWeb stands for “Don’t trust, verify”, a maxim that seeks to remove the risks of trust in third-parties like corporations and other entities that would otherwise be trusted by default.

This agreement also extends to the general pillars that respondents believe will underlie the DWeb. When asked what the most significant changes brought by the DWeb would be, three-quarters of respondents agreed that data sovereignty would be the biggest change. Beyond this, 55% thought that the inability to forge or censor content was a primary pillar, whereas around half agreed that the cessation of tracking and surveillance was among the most significant changes.

Despite still being in its early days, there is already significant congruence on the likely form of the DWeb, ensuring most efforts are likely pointed in a similar direction.

The Web is Flawed, But Building a DWeb isn’t Easy

In its current iteration, the internet is widely considered to be a good, but imperfect solution to our connectivity and data-sharing needs. Huge personal data leaks, censorship by tech giants and governments, and a lack of anonymous resources and apps count among its major limitations, and there is a strong dislike for the current web paradigm. 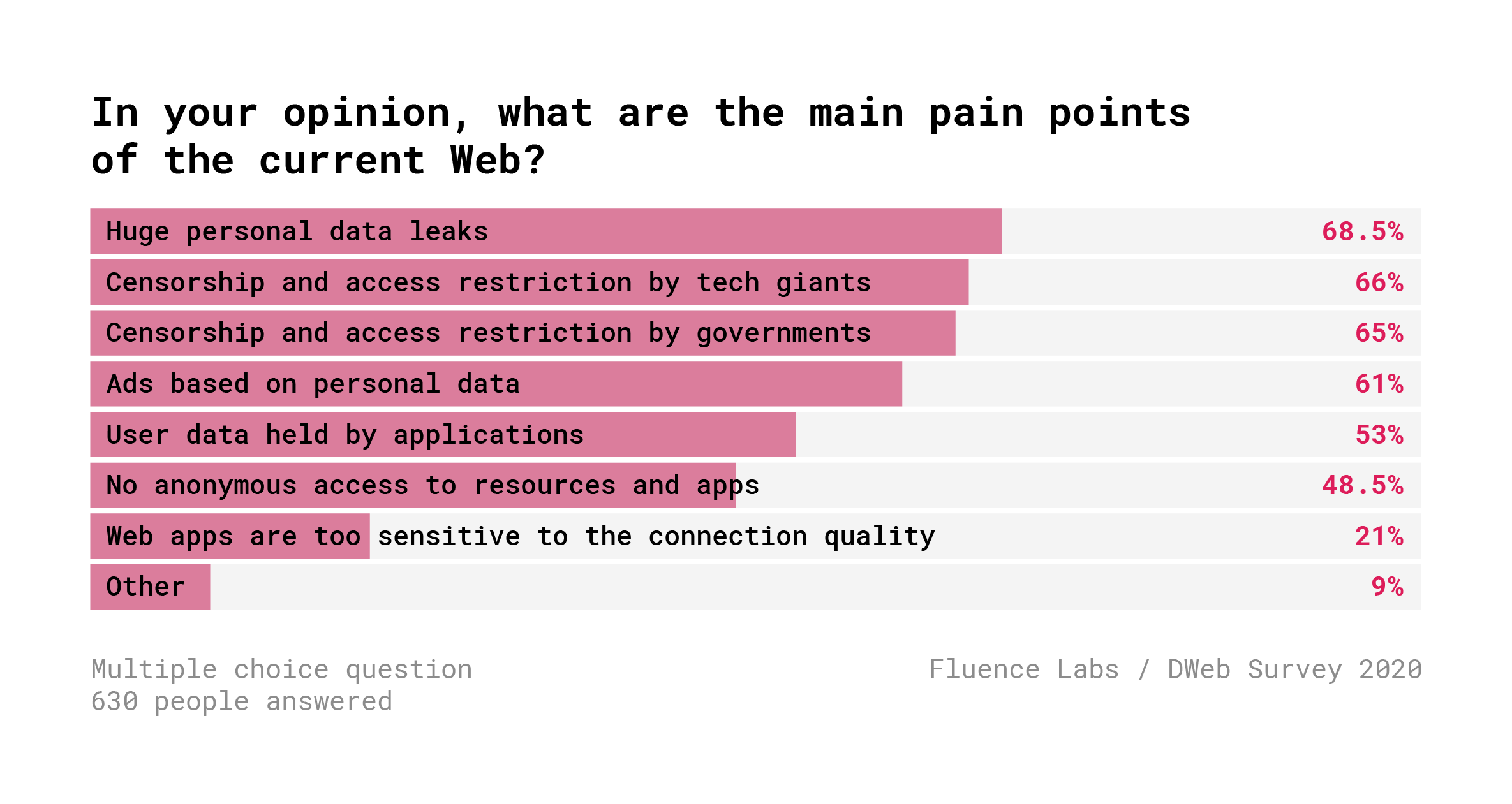 To assess the general sentiment surrounding the current web, we asked our respondents to identify what they believe the web's biggest pain points are. We found that more than 60% of respondents believe that personal data leaks, censorship and access restrictions, and the overuse and monetization of personal data are some of the biggest challenges.

Nonetheless, there is strong agreement on what needs to be fixed first on the path towards building a truly decentralized web. More than 75% of respondents believe that data sovereignty should be priority number one, followed by 59% for data privacy, 56% for tech resilience (resistance to disruption or shut down), and 51% for security. These responses further highlight a major discontent for the current centralized, restrictive web that is fraught with privacy abuse.

These sentiments point to an obvious solution—a distributed web that returns control to the users and offers respite from governments and corporations where it is needed most. 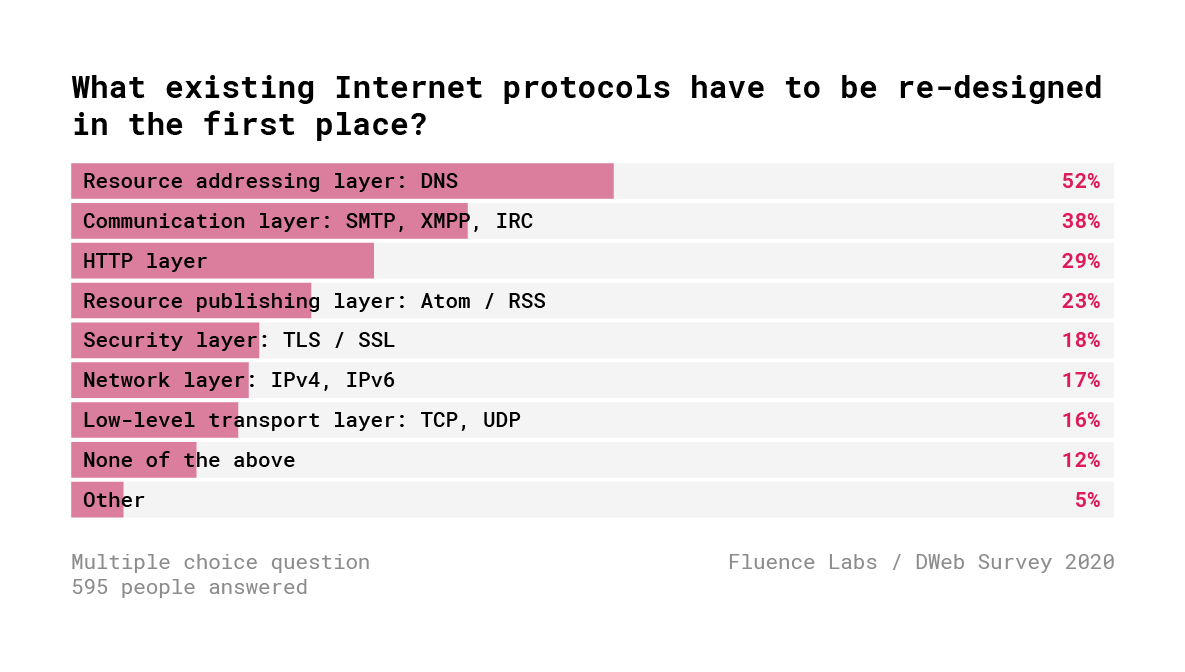 But there are numerous challenges that must be overcome before the DWeb constitutes a viable alternative to the current web. This could include overhauling, updating, or replacing some of the technologies and protocols that form the bedrock of the current web.

Among these, we found that over half of respondents believe the Domain Name System (DNS) needs to be re-designed first, but the agreement between respondents is less clear with other internet protocols, as just 38% believe communication layer protocols like SMTP and XMPP need to be revamped, while just under 30% believe HTTP needs to be fixed first.

An unexpected 12% also believe none of the above needs changing. This viewpoint is perhaps best clarified with a quote received from one of the respondents: "It can not be fixed with just software alone. There is a need for DECENTRALIZED HARDWARE to compete with the centralized Internet Service Provider hardware."

To help identify the technology stack necessary to develop the DWeb, we asked our respondents which technologies they believe are likely to be DWeb pillar technologies. The results pinpointed P2P communication protocols like Matrix and SSD (52%), content-addressable storage including Dat and IPFS (54.5%), and P2P file-sharing technologies as the three most popular options (51%).

Some of the technologies that may be used in the progression towards DWeb have already been developed, and many are in popular usage by DWeb developers. 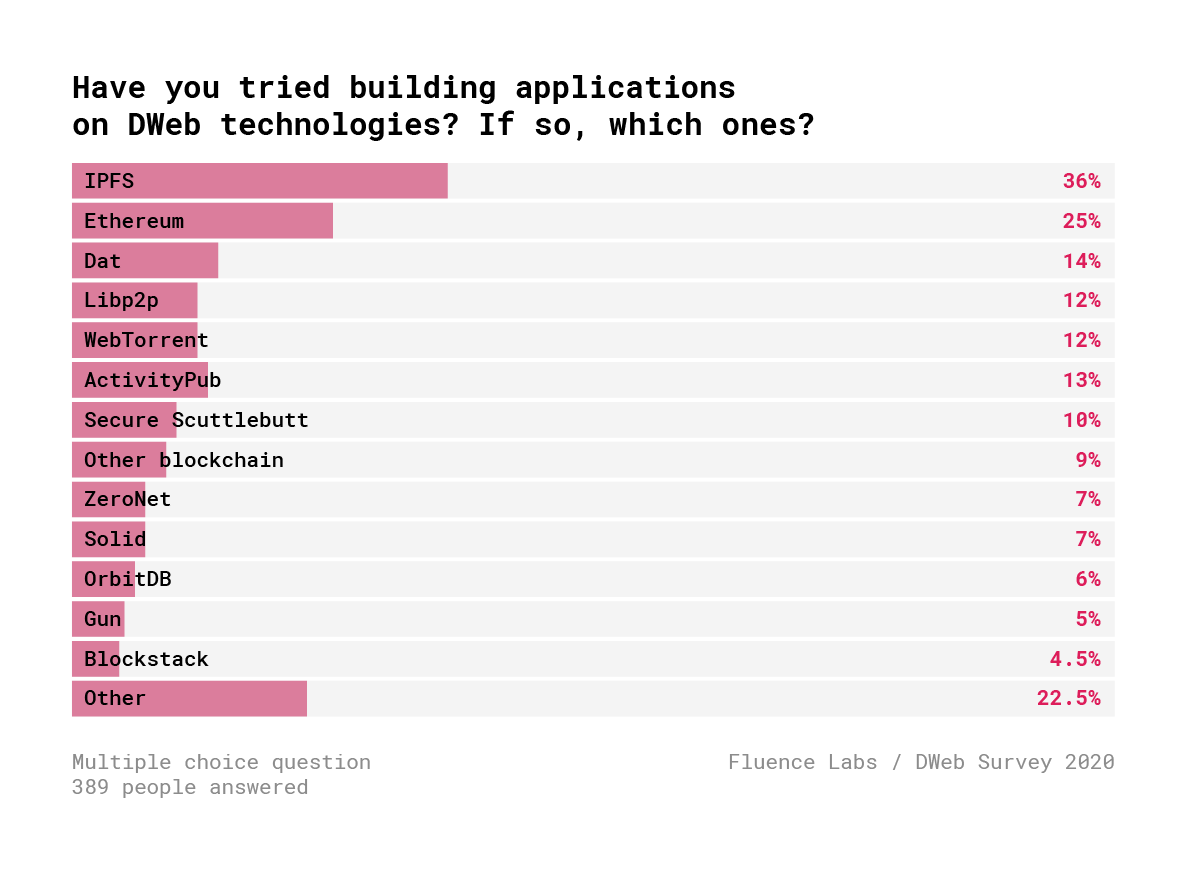 According to our respondents, some of the most commonly used technologies used for building DWeb applications include IPFS (35%), Ethereum (25%), Dat (14%), and ActivityPub (13%). Libp2p, WebTorrent, and Secure Scuttlebutt also count among the most popular responses. Some of these technologies would work to tackle several of the aforementioned pain points of the current web, while others may only be involved in bringing forward certain DWeb ideologies.

As with any emerging technology, it’s important that developers and consumers have access to detailed instructional resources to help bolster adoption. However, 44% of our respondents believe that a lack of documentation and learning resources are a major limitation currently, whereas 42% cited application issues, and 40% mentioned challenges integrating multiple DWeb technologies.

Adoption is an Issue

Although most DWeb projects are very much in their early days of development, many have gone on to launch functional products. However, a lack of adoption remains a major problem among DWeb projects, as just 9% of respondents have between 100 and 1,000 monthly users for their projects, whereas this drops to just 3.5% for 1,000 to 10,000, and 2% for 10,000 to 100,000 monthly users.

Many developers cited struggles defining a business model for their projects, and more than half of all projects were self-funded. In total, just 31% of projects have a monetization route  (freemium, paid product, or advertising), whereas almost a third (30%) extracted no money at all, and 22.5% planned to figure it out later.

In summary, the building blocks for the DWeb appear to be crystallizing, as is interest among developers and potential users—owed mostly to increasing dissatisfaction with the traditional web as a result of repeated breaches of user trust, growing censorship concerns, and a general lack of privacy. However, many of the technologies needed to enable the DWeb are still very much experimental, and developers are having trouble applying them and monetizing their project—two particularly significant barriers to growth.

Related Stories
Subject Matter
Join Free TON Community and Participate Contests! by @Free TON
#promoted
Top-8 Web Design Trends of 2021 by @riabukha
#web-design-trends
GitLive Extension v11 Release: Merge Conflicts Detection in Real Time by @gitliveapp
#devtools
What are Venture Investments and How Do They Work? by @golubev
#venture-capital
Building A Page Scroll in JavaScript by @taimoor
#css
Web Development and SEO Are Worth More Together! by @james-luis
#web-development-and-seo