Is it time stop calling yourself a developer evangelist? 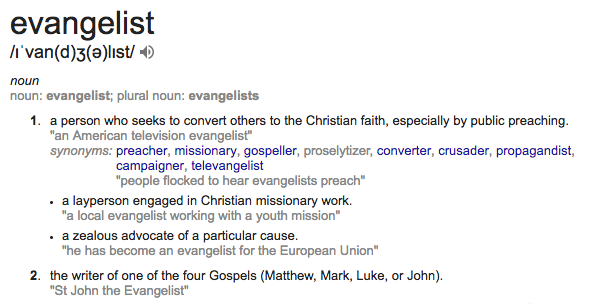 We recently started recruitment for a developer evangelist at Ably, and I couldn’t help feeling somewhat uncomfortable every time I wrote the word evangelist.

As an atheist, born to a Catholic Priest and a Jewish mother, living in a world that seems to be plagued with religion-fuelled problems, I’m aware I’m perhaps a bit sensitive to words with religious connotations. However, therein lies a problem. People, your employees or colleagues, may be sensitive to the words you use to describe their potential job role, and we should all be mindful of that.

In an article by Harvard Business Review on rethinking political correctness, the author talks about the problem an employee has complaining about something they are unhappy with because they may think it plays to a prejudices of others. By using the word evangelist in a job title, this problem may well apply to someone who could be a strong advocate for your product, but is uncomfortable, due to their religious beliefs, to call themselves an evangelist for your commercial product. Let’s take a look at the definition of evangelist to understand why:

So as we can see, evangelism is mostly about religious belief systems, but does include “zealous advocate of a particular cause.”

Right, so it’s OK then to use the word evangelist according to that definition?

Sure, if you don’t care about how people feel about the words you use as opposed to what their recognised definition is.

Take the infamous Django Github issue on the use of master/slave terminology. In just over two weeks and approaching a thousand comments from the community, the issue was finally locked to prevent any further comments. Two things to note here though relevant to my thinking on developer evangelist:

So the issue is not if the words are technically correct or not, but more to do with whether it is insensitive to people who have negative connotations with those words.

2. The issue was merged so the community (or at least the maintainers) agreed it’s time to move on from old potentially offensive terminology

Ok, but I don’t understand, evangelist as far as I am aware, does not have negative connotations so why do you propose we stop using it?

Good, you’re probably part of the majority there. But these example personas may very well disagree:

Pastor Sarah
She has dedicated her life to a cause that she believes far outstrips any earthly objectives for life. She spends her spare time evangelising the Christian faith and believes her life’s purpose is to help people discover christianity. She also loves coding, meeting people, and all things tech, and wants to be an advocate for one of the cool new tech businesses. She finds it offensive to call herself an evangelist for Acme and also for God as it undermines the importance of her Christian belief system. Acme provides a job (she likes), but God is for life.

Atheist Matt
Well that’s really just me, and I don’t believe in God, but I still have a view on what an evangelist is, and it’s a religious one. I am the CEO of Ably and a strong advocate for our realtime data platform. I believe it’s going to change the world, and I’m part of that. But I am realistic, Ably may be around in 10 years, or it may not, and I may move on one day like I did after 15 years at Econsultancy (a previous business I co-founded and was a huge advocate of). I am a strong advocate, but I’m not an evangelist. Ably is not a cause or religion, instead I believe it’s a great product that can help the community and I want to shout about it.

We’re part of a tech community that is mostly politically correct and very sensitive to issues that affect minorities. I’m proposing a small change, but one that may make everyone feel more comfortable, so I advocate we stop using the word evangelist in our job roles for commercial organisations moving forwards.

Makes sense, but what the heck should I call it?

Popular role descriptions that are mostly interchangeable for developer evangelist are:

Related Stories
Subject Matter
Enter The Decentralized Internet Writing Contest by @HackerNoon+FreeTON
#promoted
How I Got a Job in Developer Relations by @laka
#careers
Super Fan or Adrift? Why and How you Should be Segmenting Your DevRel Community by @nickdijkstra
#devrel
7 Main Takeaways from 2020 Developer Relations Report by @kimikadze
#evangelism
How to Evangelize a Programming Language by @richard-kenneth-eng
#smalltalk