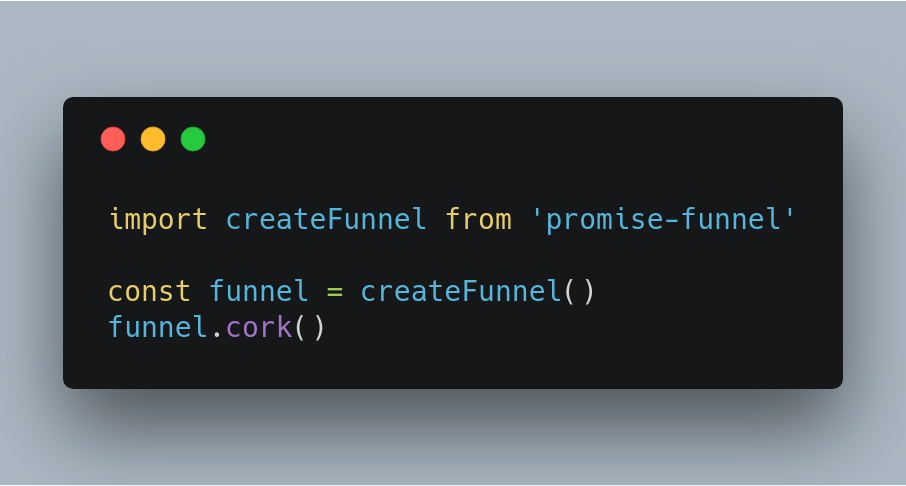 Today I’d like to give a quick overview of a new library that is made to help you manage the flow of your application.

The use case was inspired by two particular problems I had recently.

In problem one I had a React App that authenticates both immediately, and on a regular interval. During each authentication the requests to retrieve data needed to wait. I did not want to receive or show unauthenticated response errors during this time.

In the second problem I had a database micro service that immediately invoked functions that send queries, but it needed to complete the connection to the database before any queries are actually sent.

This problem seems to be somewhat common. That’s where promise-funnel comes in! You can check it out on NPM.

Promise-funnel is a very tiny (4kb) and a very simple library. It exports three functions.

Wrap: Any function that you want to be funneled must be wrapped.

Cork: To pause functions from executing you can cork the funnel. All function executions will collect so that they can run later.

Uncork: To begin execution again, and execute every function that should have run while the funnel was corked, you can uncork the funnel.

When combining these simple concepts we are able to create a powerful control-flow for our application!

How to use it

Here’s how you might use it with a database application that needs to connect before sending any queries.

Now let’s look at the authentication example that I mentioned earlier.

Every five minutes the user is logged in again. While login is happening every user request would fail. So instead of letting that happen, we’ve corked the fetch requests until login is complete. Now the user won’t be stopped by authentication.. although they might be delayed!

In case you’re wondering, createFunnel will create a new funnel instance each time. This means that you can safely funnel different actions separately.

Using your own Promises

Not every environment has Promises natively. If you want to use a library like Bluebird with promise-funnel, you can!

So far we haven’t really seen how a Promise is used by this library. A function won’t execute immediately when both the function is wrapped and the funnel is corked. A Promise is returned instead. It will resolve or reject only when the funnel is uncorked.

The code snippet above should show that uncorking the funnel will resolve the promise that was returned by the wrapped function.

There you have it! promise-funnel is a tiny library, but I hope you all can find it useful.

To install it you can use the command:

You can also view the source code here: https://github.com/JustinDFuller/promise-funnel

This is a brand new library and can obviously still be improved. Do you have suggestions? For example, maybe it would benefit from optionally uncorking with only a certain amount of concurrency to avoid large bursts. There could also be other ways to accomplish what promise-funnel is supposed to. Feel free to share suggestions and alternative tools in the comments!

Hi, I’m Justin Fuller. I’m so glad you read my post! I need to let you know that everything I’ve written here is my own opinion and is not intended to represent my employer in any way. All code samples are my own, and are completely unrelated to Bank Of America’s code.

I’d also love to hear from you, please feel free to connect with me on LinkedIn, Github, or Medium. Thanks again for reading!

Related Stories
Subject Matter
Win $2000 by building a web app on Velo by Wix by @Wix
#promoted
Listing of JavaScript Editable Table Libraries by @catherine
#javascript
How To Set Up tsconfig [Part 1] by @barinbritva
#typescript
React vs Angular: Final Thoughts by @RAHULISM
#javascript
Let's Go! 5 Use Cases When You Need Golang for Your Tech Project by @eugeneborisenko
#golang-development
Apply This Technique To Serve HTML Via Templates With FastAPI by @fastapitutorial
#fastapi