In Math We Trust. Do You? Or Should You?

A few days ago, one of my favorite artists, Carlos Cruz-Diez, passed away. He is considered one of the fathers of kinetic art, which plays with the viewer’s perspective to provide the illusion of movement. He had a scientific, almost mathematical, approach to art and did a lot of research on the physics and the physiology of color perception.

His works are characterized by being able to produce colors in our brains that are not there. His mathematical approach also reflects in the way he created his works. For instance, he embraced modern technologies like personal computing to produce his works. Although his approach to art is very mathematical, his works have souls.

You don’t see his works; you live them. And that has to do with the psychology behind his works.

Gain the benefits of trust without the drawbacks of trusting

The technology behind blockchain is binary. A combination of network, cryptography, computing power and consensus algorithms to create a decentralized, immutable ledger that can be leveraged for smart contracts. A mathematical approach for creating something that is not mathematical at all, a distributed system of trust.

A system that is capable of securely managing, storing, and transferring any asset without the need for intermediaries. And it is this distributed system of trust that has the potential to change the world. With blockchain technology, we can gain the benefits of trust without the drawbacks of trusting. It will impact every system which requires authorities and intermediaries to function.

And ultimately, it will transform the way we function and collaborate as a society.

Take a look around you. Just about everything you see is part of a business network. The space you are in. The door you used to enter it. That cup on your desk and the coffee it contains. The screen on which you are reading this article etc.

Now take a look outside and see the gigantic maze of business networks in front of you. The buildings, the streets, the cars that are passing by, and the planes that are flying overhead. Even the sun is part of a business network. Now think of the rules and legislation within and around these business networks.

And this has quite some drawbacks. To illustrate this, let’s take a look at the following use case of cross-border payments. I have added a simplified illustration of the processes and business networks that are involved. 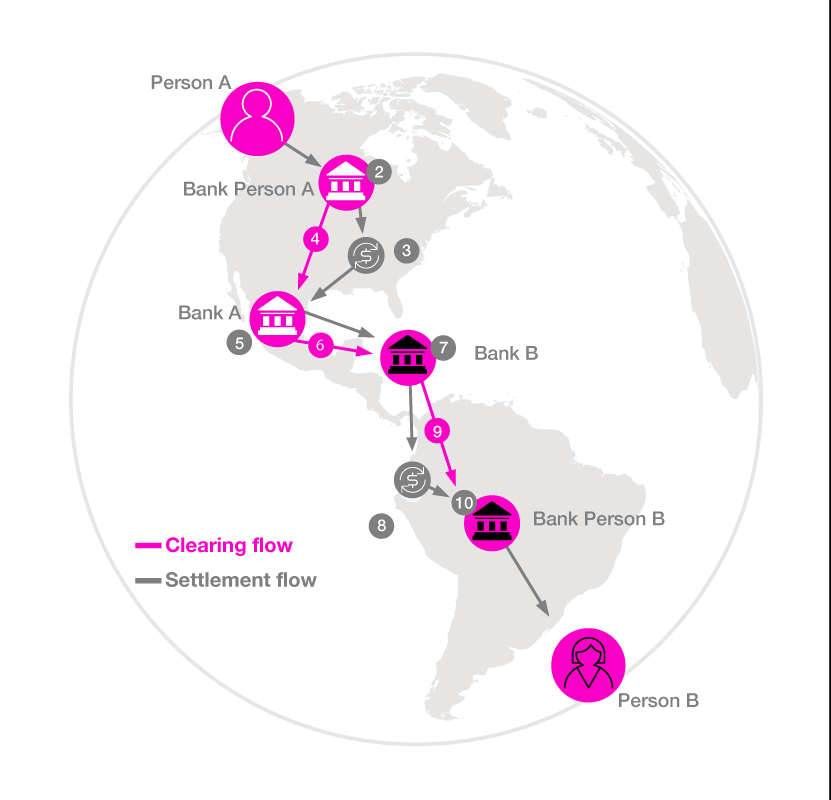 As you can see, even the simplified illustration is quite complicated.
There are a lot of people, systems, processes, authorities, and intermediaries involved. The complexity of this system is one of the reasons why cross-border payments are so costly and take such a long time to settle.

The goal of the system is to minimize risk by creating trust. Trust between banks, networks, countries, account holders, etc. A system of trust that requires authorities and intermediaries to function.

Blockchain technology has the ability to change the psychology behind this trust system completely. And because a picture is worth a thousand words, I have added an illustration on how this can be achieved below. 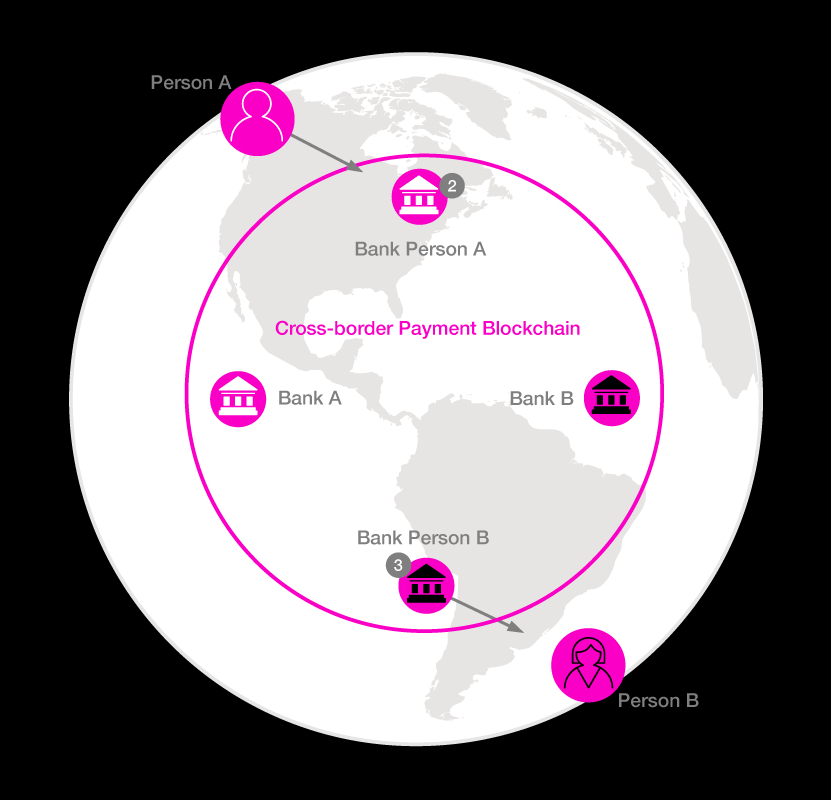 Blockchain technology can create trust and collaboration between entities that do not trust each other. Instead of centralizing ownership, ownership can be distributed between entities involved. And this decentralization can result in a new and secure way of collaborating, as illustrated above.

Because of the nature of blockchain technology, it can create a trust-network. A trust network that, by use of consensus algorithms, can protect itself from malicious actors within the system. And instead of defining the rules of collaboration on paper, blockchain technology makes it possible to establish these rules in code through the use of smart contracts.

Furthermore, data is accessible and shared through an immutable distributed ledger, meaning that the entities involved have access to a single source of truth. And because it is an append-only data structure, it will create a transparent audit trail. Next, blockchain technology is open source technology, and it brings trust through transparency for every entity involved in this system.

Blockchain is to trust as the internet is to information

Some of the business benefits of using blockchain technology are obvious: cheaper and faster cross-border payments by removing authorities and intermediaries. A system like this could make near-instant settlement of payments possible.

Furthermore, it brings security, transparency, and regulation to the system. As a result, there is less room for human error and malicious actors. As a result, the system will achieve a better way of creating trust between all entities involved. A less obvious benefit is a competitive advantage. The blockchain-based business network is a walled garden.

And that will make it very difficult for banks outside the system to compete.

This is just one use case that illustrates the power of blockchain technology. There are millions more. Blockchain technology is a game-changer that has just started to show it’s capabilities. One of the pivotal moments in our history is the start of the machine age.

As a result, the majority of the use cases are still at the idea stage. And only a handful of use cases that are in development are currently able to deliver any value. One of the reasons is that blockchain technology is rarely the simplest way to solve a problem to which it can be applied. This is a psychological barrier that needs to be overcome for blockchain technology to become adopted.

New technology is always surrounded by ignorance, misconception, and lack of knowledge. I used so-called private or permissioned blockchain technology for the use case mentioned above for a reason. Currently, it is a challenge to connect to the real world to the blockchain world. For the majority of use cases, public blockchain technology has a lot of problems that need to be solved.

There is no way to censor anyone, ever, on a permissionless blockchain network

On a permissionless blockchain network, it is impossible to censor anyone ever. It is the basis of cryptocurrencies like Bitcoin.

But the robustness of these algorithms has a side effect. The Scalability Trilemma. Meaning that there is always a trade-off between the three essential properties that define public blockchain technology: decentralization, scalability, and security.

Private or Permissioned blockchain technology requires a type of permission to interact with the blockchain network. There are barriers to entry; It is a closed ecosystem.

Because this permission handles a large part of the security of the system, private blockchain technology does not require very robust algorithms to secure the network and reach consensus between the entities involved.

Adoption and the future

But despite the advantages, our business networks remain hesitant in adopting blockchain technology. I have illustrated the main reasons below. 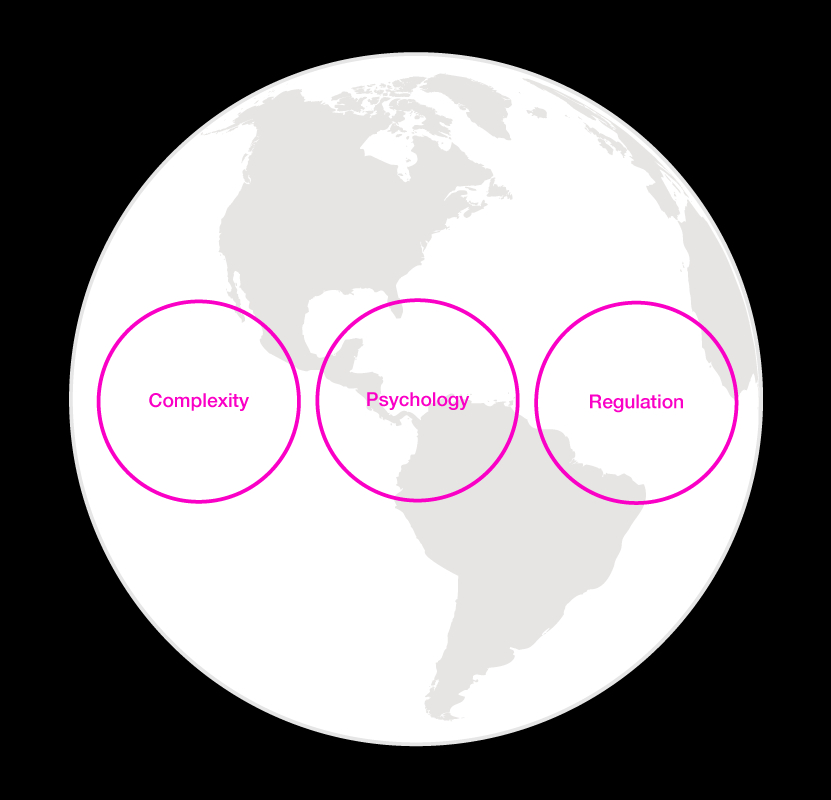 Moreover, a lot of real-world systems are legacy systems. And these will need to be changed or upgraded to cope with the new requirements of blockchain technology, which involves risks and costs. And with added complexity comes the added risk in terms of security.

Because of the fluctuation of the value cryptocurrencies, there is a problem concerning the predictability of costs. And this unpredictability results in risk. Besides that fact that regulation and legislation have an impact on the value, there is also a risk of so-called red flag legislation. And this can result in the outright ban of cryptocurrencies and the blockchain technologies involved.

Another problem is the combination of privacy laws and distributed immutable ledgers. The right to be forgotten is hard to achieve with blockchain technology.

Probably the biggest problem is psychology. Much has been written about blockchain technology of how it displaces, reshapes, or eliminates trust. Within the blockchain industry, there is currently a very narrow definition of trust, summarized by catchphrases like “

Trust is used as verification.

But verification isn’t the same as trust. Trust is a combination of morals, reputation, security, and institution. And with institution, I mean the governance that induces people to behave according to the group norm and to impose sanctions on those who do not.

This philosophy leads to black boxes that lack transparency. Because blockchain technology requires a certain amount of transparency, this philosophy needs to change. And that is something that is difficult to achieve and is one of the reasons why currently, our business networks exaggerate the obstacles of security, scalability, and complexity.

These reasons combined lead to the current slow adoption of blockchain technology.

There will be a spectrum of networks, technologies, and types of decentralization.

But of course, this will be a process. For a lot of business networks, the adoption of blockchain technology will require a new way of working. This to lower the risks and costs of failure. This will require a startup mentality and the philosophy to fail as soon as possible. A process that starts with things like design thinking to include participants and stakeholders in blockchain-based projects.

A way of working that requires milestones and an agile mindset. Because standards will start to emerge, projects will become less centered on technology and more centered on creating business value. This will be the case for both public and private blockchain technology.

Some cryptocurrencies will evolve to become global reserve currencies. We will have stable currencies that act as blockchain platforms that can run smart contracts.

Something that will flatten our business networks. And it will be fascinating to see how the psychology of our business networks will change. For private blockchain technology, I see a big future for Platform as a Service Solutions. In a lot of use cases, it does not make a lot of sense to develop a custom protocol and to manage the infrastructure that is required. Platform as a Service Solutions will provide a lot of business benefits in terms of cost savings and time to market.

And this adoption will be driven by a change in psychology. It will lead to a complete change in how our business networks will operate and function. And that will change the world as we know it.