How Many Days of Your Life Have You Spent in an Uber? 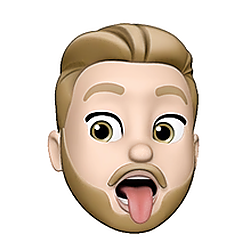 Launched 3 startups. Made 1 exit. Built a financial marketplace with 500,000+ users.

I've spent 12 days in Ubers over the last 3 years. Read this to find your own lifetime Uber stats.

When I go about testing my hypotheses for any new product, I come across the same pain every time - a massive lack of time. If you ask me, time is the most valuable currency in the world.

How much time do you waste on your daily commute to work and back?

Sure, you probably waste even more of your life on social media, but let's omit that particular time-suck for now.

Even though most of us are try in every possible way to "usefully" fill each rush hour with another audiobook or podcast, we are, nevertheless, in total frustration every single time we’re stuck in traffic.

It is not surprising that a teleportation device is something that interviewees increasingly joke about when answering a question about an ultimate product that they lack in everyday life (if you give them total freedom).

Do not forget that the modern world gives us a range of opportunities that help us remain as effective as possible. But nowadays no person gets excited by the ability to distantly control the warmth of the water in their smart kettle, nor by the remote online video work offices via Zoom.

We don’t get excited using ride-sharing services, but specifically, such world services as Uber, Lyft the European counterpart - Bolt and the Chinese - Didi Chuxing. Of course, there are many more of those, but this list would be too long to mention. Don’t forget that ride-sharing apps have attracted more than $10Bln in the capital already.

I must admit: I probably would never have got excited by the investment prospect of Uber initially, right up to the moment I realised how heavily I've made use of it in the last 3 years.

First, the official Uber app does not allow you to view your overall statistics, but ProductHunt search never lets you down. For instance, this Google Chrome extension parses all info from your Uber trips data and the results can be very interesting.

We can confidently note, that it is in fact Uber (or a similar app), that allows us to identify the entry and exit points in the space, just like the teleportation would work, right? And that's in more than 60 countries of the world (Uber), using the same service!

The front passenger seat, under the unwritten rule of the OTC (open to the conversation), promises a hot conversation on any topic, often political (most likely political, if you are not a local).

The duration of the trip can be safely filled with administrative tasks (if your vestibular apparatus allows), work calls, quiet thoughts, or even a power nap. The front passenger seat, under the unwritten rule of the OTC (open to the conversation), promises a hot conversation on any topic, often political (most likely political, if you are not a local).

By the way, these are my stats: 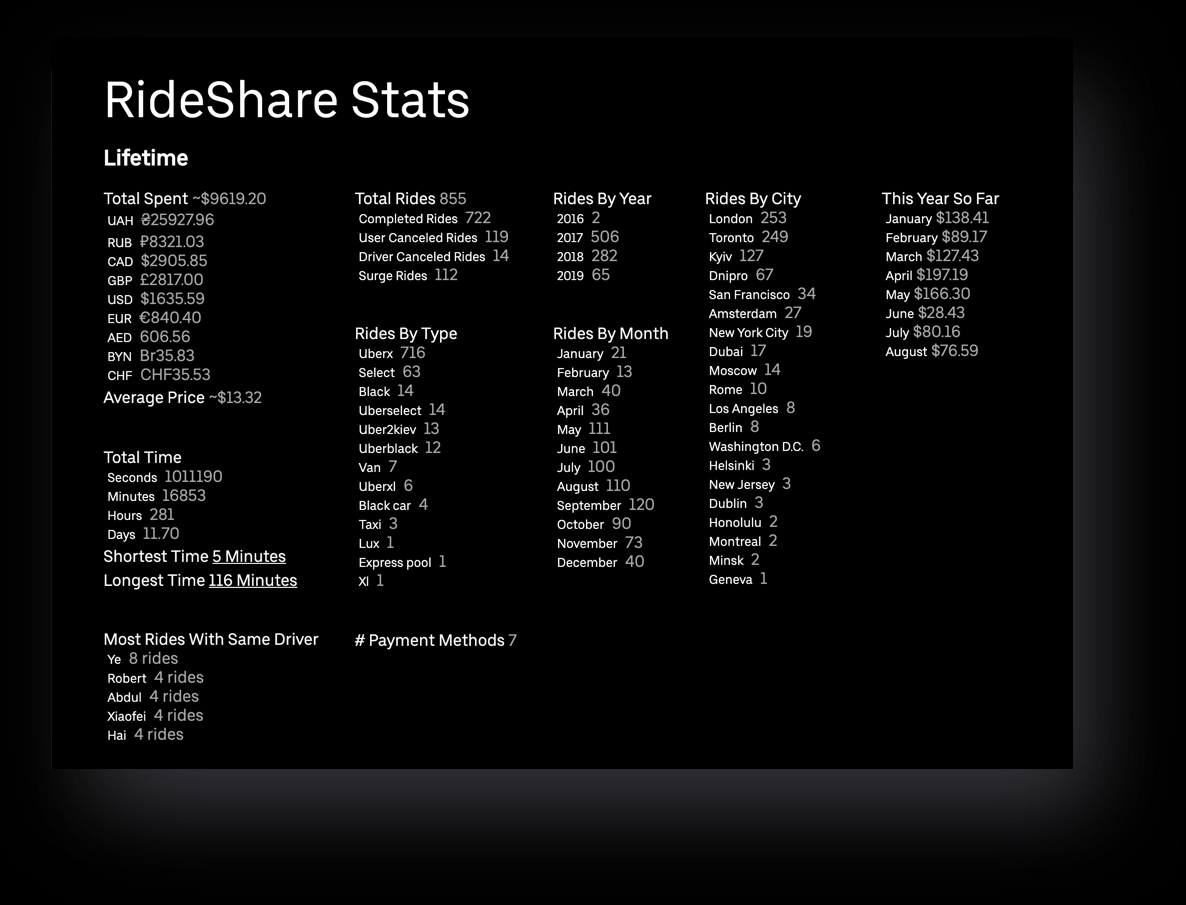 And now to the fun part.

Over the past 3 years I've spent almost 12 days travelling in Uber. You could potentially walk from Barcelona to Amsterdam in 12 days or from Amsterdam to Barcelona (for many it would've been much more fun). 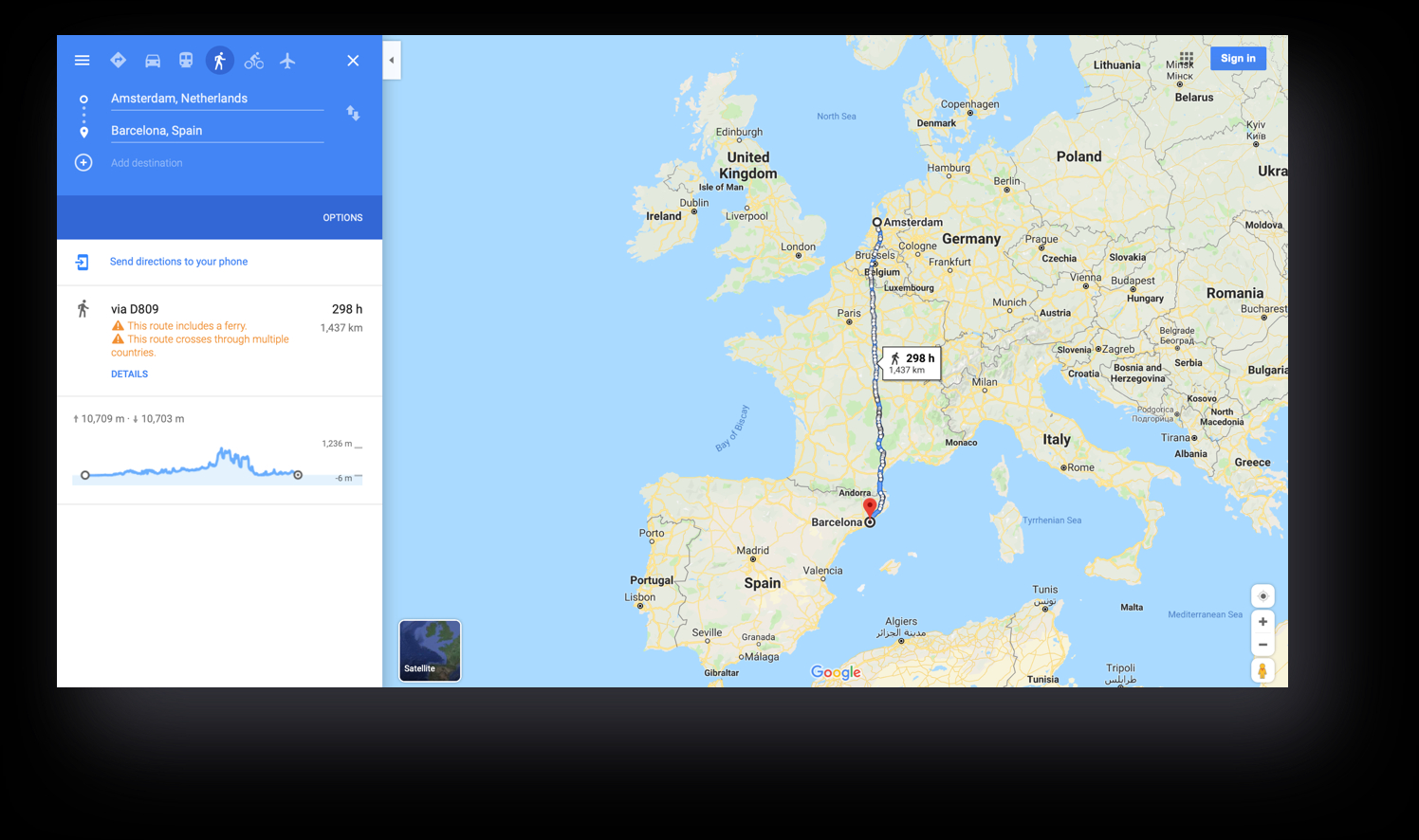 It’s also just a week less, than it took a Chinese company to build a 57 store skyscraper.

The list is proudly closed by Geneva, with just one trip, due to convenience in public transport connections. By the way, if you ever visit Geneva, make sure you get a free train ride ticket from the airport to the city.

I've also used Express pool - just once though. Did not work for me at all, was not the most pleasant trip, to be honest. The vast majority of my Uber drivers were indeed very professional, which was a complete opposite for companion passengers in the Uber pool.

February? Definitely not my Uber month 😂.

You probably know that feeling of rejection, when drivers cancel booked trips from time to time. This is especially hurtful, when you urgently need to get somewhere. But according to statistics, I canceled my trips 10 times more than drivers cancel on me. Conclusion? If you think everyone in the room is an asshole, most likely it is just you.

Speaking about our precious time. My longest trip took 116 minutes. A trip to the airport, where else. That is 4 minutes to 2 hours. A trip, which is long enough to fit two full Game of Thrones episodes! Perfect, while you're getting your bum to the airport, where you can spend another hour in queues, just to get to an actual flight, so that you can spend more time at the security checks on the arrival, to get to your next Uber 🙌.

On the contrary, my shortest trip was exactly 2 minutes 26 seconds. It was a little bit more expensive than a bus ride. Was it worth at all? Did the driver waste his time? Well, in any case, the bus would have been much longer. The driver was on the way back home and this trip did not bring him any inconvenience. Win-win situation. I believe that in many cases, especially urgent ones, this option is the most suitable.

Everything you need to know about YCombinator S19 startups