Originally published by By Shruti Gandhi on August 16th 2018 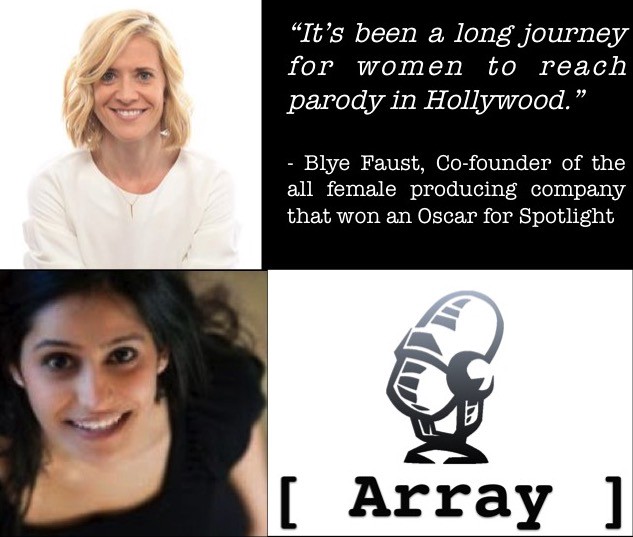 Podcast Interview with Blye Faust, the producer of an Oscar winner movie Spotlight and parallels between Hollywood and Silicon Valley

Surprisingly there is a lot in common between how movies and startups are made. Blye Faust is an academy award winning producer of the movie Spotlight about the Boston Globe investigation of the Catholic church for allegations of abuse. She has also co-produced The Queen Latifah Show and started an interior design firm byblye. Blye breaks it down for us on how movies are made and the parallels between Hollywood and Silicon Valley.

With her co-founder Nicole Rocklin, Blye started a one of a kind women-led production company, Rocklin/Faust. Her company focuses on “Telling transformative, entertaining true stories that engender a collective social dialogue, inspire change, and celebrate innovation.”

In this episode we discuss her journey as she transitioned from practicing law into founding a successful production company, how she came about producing and spearheading the creation of the academy award winning movie Spotlight. She also shares her thoughts on the lack of diversity and culture of harassment within the entertainment industry.

Listen in to hear a story of a founder creating a company in Hollywood which is very different than our typical tech podcast. We thought this unique founding story was definitely worth sharing.

In 2001, editor Marty Baron of The Boston Globe assigns a team of journalists to investigate allegations against John Geoghan, an unfrocked priest accused of molesting more than 80 boys. Led by editor Walter “Robby” Robinson (Michael Keaton), reporters Michael Rezendes (Mark Ruffalo), Matt Carroll and Sacha Pfeiffer interview victims and try to unseal sensitive documents. The reporters make it their mission to provide proof of a cover-up of sexual abuse within the Roman Catholic Church.

Related Stories
Subject Matter
Enter The Decentralized Internet Writing Contest by @HackerNoon+FreeTON
#promoted
Gonna fly now: why I've left Silicon Valley's lions for Vultr by @ryanpollock
#cloud-computing
Why You Should Chase Interesting Problems, Not Money by @daniel-chae
#tech
What Inspired us to Write About Games? by @jackboreham
#slogging
5 Warranted Ways to Annoy a Journalist with Your Email by @elinakochenko
#public-relations
3 Mistakes I Made Learning Data Journalism (and How to Avoid Them) by @charlie-custer
#data-journalism