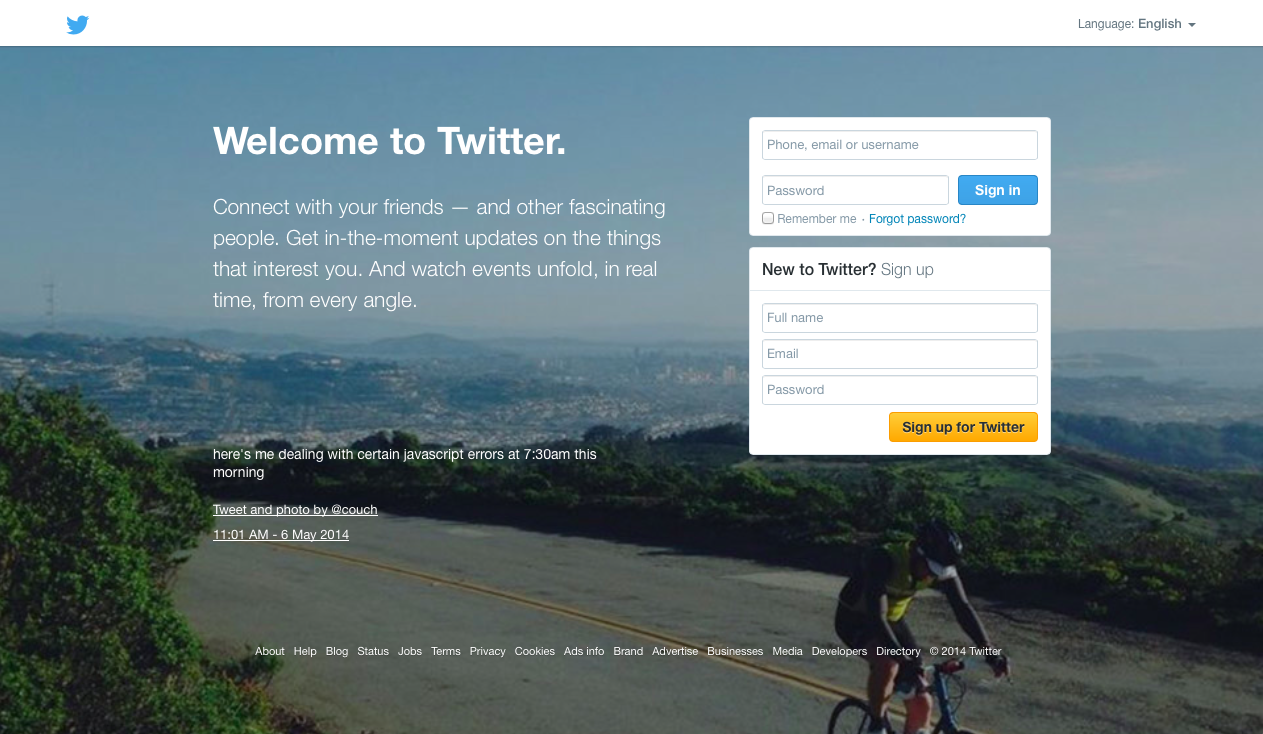 By: Alex Taub (with help from Zhanna Schonfeld)

I’ve been meaning to write this post for some time. I love Twitter — I get so much value from it. I never want it to go away (I actually have a bet with a friend that Twitter will be here in 20 years). I am building a company that Twitter was the first network we added because of my (and Michael’s love it). But Twitter has an onboarding problem.

This problem stems from the simple fact that it is not simple or easy for a new user to learn how to use Twitter to maximum benefit. It takes a lot of work (very much worthwhile) to make Twitter work for you. I have been active on Twitter since 2010 and I’m constantly fine tuning which people I am following for the right mix of things I have an interest in (Sports, Tech, TV, Movies, Music, Other Media, etc).

I believe Twitter’s growth numbers have slowed in recent years because they have failed at product education and ease in the sign up process. Twitter is doing a great job on monetization but it seems a little ridiculous that most people don’t know that if you start a tweet with an @ mention, that only the people that follow you and that handle will see it in their feed (here is a quick fix). I think there is a solution to their onboarding problem and I want to go through it in this post.

I’m about to build up some context on why I think this is the right path, but if you just want to see the solution scroll down to Solution section.

One thought before jumping in. I think back to how I learned how to properly use Twitter and how I have heard others, that use Twitter to their benefit, began actively using Twitter, and almost all of those scenarios involved having a friend or family member teach them. For me, I learned how to use it when I joined Aviary in 2010. @msg and @mayafish said I needed to get on active on Twitter and gave me a Twitter 101 sit down. I taught my wife (@liztaub) and my mom (@hindytaub). My mom taught my dad (@rubytaub) and on and on. I’ve heard this type of situation with many others and think Twitter might want to invest a little time and effort in local events. I think it will go a long way with the snowball effect of friends/family teaching friends/family.

Now onto the onboarding process. Let the assumptions begin.

First let’s diagnose the main problem. I think the main problem is that from the sign up process to becoming a potential active user, individuals are not getting to a point where they have enough value to continue. They are not building the optimal follow list for their respective interests. This leads them to not use the product often. I think this is a fair assessment. So the solution needs to be — how can Twitter get new users to a point where they are following enough of the *right* people to come back and use Twitter as their #1 source of information?

The current sign up process requires someone to be very much a self-starter. They need to take a major undertaking to *find* good people to follow. But most regular people are looking for shortcuts on a daily basis. They want things done for them. They don’t want to take 30 minutes to follow a few hundred people to have a steady flow of news. They want it done for them. And they want it to be good. This general life mentality is at odds with the way Twitter runs its sign up flow and I think that is where the split of active users vs. non-active users happen. I don’t think Twitter releases total sign ups vs. active users but I imagine there is a major discrepancy (more than your normal consumer-facing company). So how does Twitter solve this pretty big problem?

I’ve thought about it a lot. I’m in a unique situation because I speak to a lot of Twitter users (mostly brands, but a sprinkle of individuals) given that I am the co-founder of SocialRank (helps brands find out more about their followers on Twitter (and soon more networks) and pulls them into a central location — sort of like a Hootsuite but for followers). This is something I do all day. I thought back to what I was doing before SocialRank, running the business side of the API platform for Dwolla (a payments company building a 21st century Mastercard or Visa) with my co-founder Michael (where he led the technical side).

When we joined we knew that the Developer portal needed a huge facelift. At the time it was just a bunch of developer docs, which was great, the problem though was non-technical people were not understanding how they could leverage the API for their company. A common path we saw was a CEO, head of product, business lead or someone else come in trying to understand Dwolla and what they could do with the API but being discouraged because there was no path or track for them. They didn’t understand the Developer documentation so we lost a potential merchant or partner.

So what we did was we build an entry point (developers.dwolla.com) that had two paths. One for technical people and the other for non-technical folks. You either could code or you couldn’t (I think we went with “don’t code” because “couldn’t code” was a bit mean). If you could code, you go down that path and see the developer documentation, helper libraries and more. If you couldn’t code, you went down the path to see what the API’s capabilities are, other merchants using the API (i.e. how they were using it) and more. This flow worked out really well, API usage grew, and a lot of developer sections copied it because of the success.

So how does this relate to Twitter’s sign up process? I think there needs to be a path split at the most important point of Twitter’s sign up. Instead of “Can Code vs. Can’t Code” it is “Build your follow list” vs. “Build it for me!” Let’s dig in as how I think it should work.

Twitter does a really good job right after sign up by asking you your interests. Once you finish that step though is where I think they are missing a step. Here is where we add the split path. One to build your follow list as normal and one to have it built it for you. If you click “Build your follow list” (or whatever they want to call it) you go down the natural way of onboarding. This follows the existing sign up process and is for those self-starters that already naturally figure out this crazy thing they call Twitter.

If you click “Build it for me!” that’s when things get interesting. There are a few ways to approach this, but let’s look at three I am thinking about.

Once you know their interests from the previous step, Twitter builds an optimal follow list of 100–300 accounts that are awesome in these interests. So for example if you selected an interest in Sports, Tech and Music (Rap + Hip Hop). You’d have everyone from Bill Simmons and Kobe Bryant to a sports writer for the NY Times and A-Rod for sports. For tech you’d have everyone from Elon Musk, Tim Cook and Fred Wilson to Marc Andreessen, Drew Houston and Marissa Mayer. And for Music you’d have accounts like 50 Cent, Drake, Eminem, Iggy Azalea and Macklemore. You’d have a combination of popular accounts (i.e. industry-celebrities) in the space as well as people that have a highly engaged follower base (Twitter, you know this data, so go and make awesome follower lists). Then the main education to a new user is around perfecting that follow list — adding new accounts / removing accounts, what to tweet, how RTs, Favs and @ mentions work, etc.

On this path, Twitter will ask a new user who they want to emulate. This is instead of building an optimal follow list for them and auto-following all of them. In this path you still come straight from asking what their interests are. But instead suggest a few people that have the same interests as them and push them to choose one or two of them to carbon copy the people they already follow.

This is a little riskier to do right because the people someone normally follows is a combination of interests, friends, family, etc. So for example if someone had similar interests as me and decided to follow the people I follow (in one fell swoop enabled by Twitter), they would get sports, media, tech but also get my friends, family and more. There is not a lot of that in the people I follow (maybe 20–50 accounts total) but enough to throw people off. It would be interesting if Twitter could do the carbon copy but remove the smaller accounts (most likely friends/family). In other words, take the top 75% in terms of follower count or engagement and start someone there. Lots of ways to slice this one.

I believe that once Twitter adds this crucial step of splitting the two types of people that come in (the ones that want to select for themselves who to follow and the ones that want to be told who to follow based on interests) I think Twitter will be able to A/B test and find optimal paths to activity as well as continue to tinker with the massive amounts of data they have and make the suggestions 100x better.

So Twitter employees, if you like this flow, pass it on to your product folks! I have more thoughts on all of this but I think I’ll leave the post here. I’d love to debate the topic with anyone that disagrees on the diagnosis or has a better solution — find me at @ajt or Alex@SocialRank.com.