How to Introduce Collaboration into your API Development Lifecycle

We all know that APIs have become foundational to how organizations streamline integration and build new applications. In essence, they are the connective tissue between different systems, data, and application
layers.

I remember the days when businesses used to have the luxury of weeks or months to hand-code unique integrations to create new applications. Unfortunately, (or fortunately … ) those days are gone. Competition today demands faster development cycles with higher quality output. The ability of APIs to simplify interconnectivity has become vital as the demand for new digital applications grows.

However, in the rush to deliver new applications faster, the delivery of a quality API can’t be overlooked. We run the risk of disappointing customers with unsatisfactory online experiences, or potentially fail our partners by creating APIs that make it difficult to integrate with your business. So what goes into making a “quality” API?

One can’t dismiss the importance of good API design. The benefits of a well-designed API can have immediate impact on development, including
improved developer experience, faster documentation, and ultimately, higher adoption for your API. So, how does one define good API design?

In general, an effective API design will have the following characteristics:

The Value of OpenAPI and “Design First”

The adoption and growth of APIs continues to grow exponentially, and with it, the challenge of API standardization. It consistently ranks, according to my company's recent SmartBear State of API Report, as a top challenge organizations face as they attempt to scale API development. 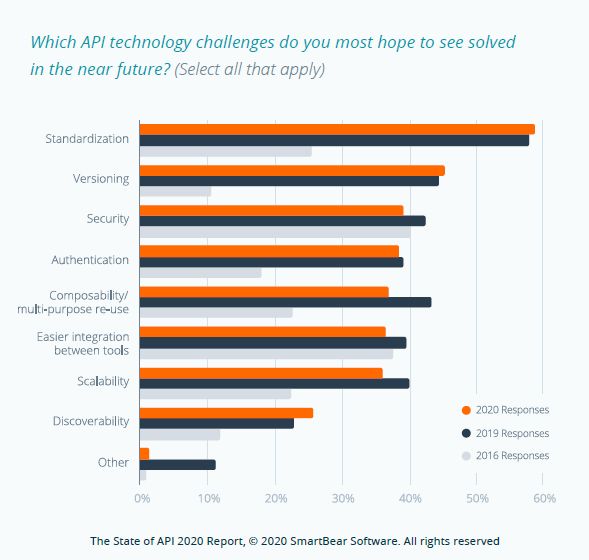 One of the best practices to address standardization is to leverage a design standard like the OpenAPI Specification (OAS), formerly known as Swagger. OAS provides a standard, language-agnostic interface to RESTful APIs which allows humans and computers to discover the capabilities of the service without access to source code or traditional documentation. Leveraging a standard for designing the API contract or definition is commonly referred to as taking a “design-first” approach.

The design-first approach advocates for designing the API’s contract first before writing any code.

The code-first approach is a more traditional form of building APIs, with code development happening after the business requirements are laid out, eventually generating the documentation from code.

There are pros and cons with both approaches, but leveraging an OpenAPI definition across your API lifecycle can bridge the gap between design and development teams. The OpenAPI definition can act as a blueprint that keeps all team members aligned on the API’s objectives, and can translate into improved efficiency as team members work in parallel on steps in design and testing. An ideal workflow may look like the below, where teams use the specification as a blueprint to start automatically testing. 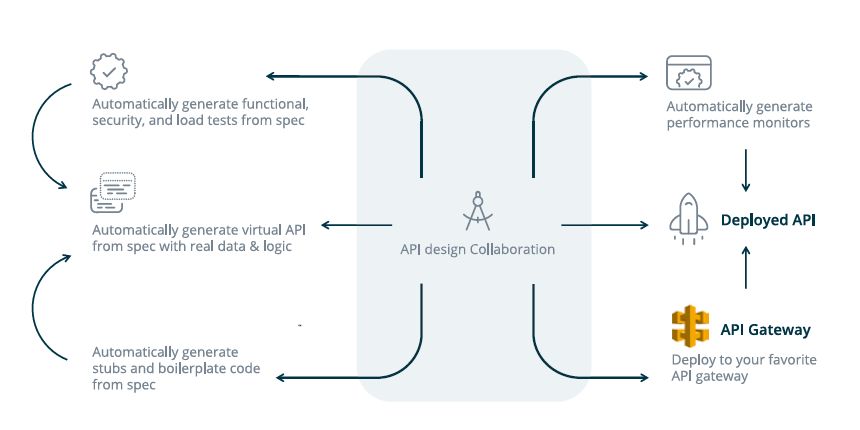 Taking APIs from design, to development, to delivery is an orchestration that involves multiple team members. Those working on multiple platforms and tools to support quality throughout the entire API lifecycle. In order to succeed in today’s competitive, intertwined business landscape, organizations must have an API strategy that provides developers with the flexibility to integrate ever-evolving internal and external environments, in the workflow of their choice. However, with increased dependencies comes increased delays, which is where virtualization can play a role in your team’s development.

When developing in an iterative manner, changes to back-end systems will require days/weeks to complete. This make it challenging for teams dependent on APIs to perform their work, including front-end developers,
DevOps/test developers and other third-party developers.

A best-practice approach to eliminating these dependencies is to decouple the development of front-end and backend services. In order to support
the integration points each team may require, virtualized services can act in place of the actual services ones for dependent teams. You can avoid CI/CD bottlenecks and enable parallel development that leverages the OpenAPI definition with API mock services or API virtualization. Utilizing the
definition and service virtualization, a development team can simulate specific components and very quickly spin up a service/API to conduct different tests such as: load tests, functional tests, security tests. These types of tests can now be done early in the development lifecycle, and not be blocked by other functions. Shifting your entire testing strategy left by virtualizing your APIs can improve your system availability, speed up your development, and, thus, increasing quality.

Overall, the key to building quality into your API development lifecycle is to implement a process that enables designers, developers, and testers to collaborate. Using the OpenAPI definition to create mocks, virtualizations, and tests cases to accomplish multiple tasks in parallel before the API is fully developed is a powerful approach and a good starting place.

Related Stories
Subject Matter
Book a Demo. Ship Fast. Rest Easy. LaunchDarkly. by @LaunchDarkly
#promoted
How & Why We Built a Git Workflow to Accelerate API Testing by @Phil Voulgaris
#api
How Many Devs Does It Take to Fly To Mars? by @natasha
#hackernoon-podcast
DevSecOps Introduction: Clear Instructions on How to Build a DevSecOps Pipeline in AWS [Part 2] by @gourav-das
#devsecops
The A-Z Of Email Development And Sending by @andriy.zapisotskyi
#email
Decentralizing The Internet: The Hitchhiker's Guide by @nich
#decentralized-internet
Why You Should Chase Interesting Problems, Not Money by @daniel-chae
#tech