How Data Got Us To The Moon

I originally published this story on the Atlan Humans of Data publication.

On July 20, 2019, we complete fifty years since humans officially landed on the moon for the first time in 1969. This historic feat of accomplishment is often synonymous with two names—Neil Armstrong and Buzz Aldrin.

That’s not the complete picture.

While we celebrate the legendary astronauts who first stepped on the moon, their achievement wouldn’t have been possible without the hard work and dedication of countless others.

Here’s the story of the humans of data behind the Apollo 11 mission.

In 1957, the Soviets had launched the first satellite, Sputnik. After that, they sent humans to space.

All that was left was sending the first human to the moon.

As the Soviets seemed to be winning the space race, former U.S. President John F. Kennedy issued a challenge to NASA (National Aeronautics and Space Administration).

In 1961, President Kennedy set a goal for NASA to “land a man on the moon and return him safely to the earth,” within the next 10 years.

The mission seemed impossible as the U.S. didn’t even have a spacecraft to take humans to the moon, a computer compact enough to do the navigation, spacesuits, knowledge of the effects of prolonged weightlessness or space food.

They didn’t even know what they would need, and whether humans could even think in zero gravity conditions.

Managing such a large nationwide team with diverse skills fell onto the shoulders of George E. Muller, now known as “the father of the space shuttle.”

He transformed management in NASA by introducing radical approaches. One such approach was the ‘all-up’ testing method that allowed several systems to be designed and developed in parallel, drastically reducing design time.

Another approach was to organize personal visits from the NASA astronauts to the factories developing the parts of the Apollo program spacecraft. The visits made the factory workers realize that a single error could kill the man they met, motivating them to devote their lives to Apollo.

A major challenge that NASA faced was building a computer small enough to fit onboard a spacecraft. Even the most compact “minicomputers” were as big as 2-3 refrigerators placed next to each other.

NASA also had to defy the popular notion that computers weren’t reliable. Back then, computers had a bad reputation as they broke down every few hours.

After several years of experimentation to reduce the size of the Apollo spacecraft computer and boost its computing power, the engineers and scientists at MIT and NASA had a major breakthrough.

They used the IBM mainframe computers on the ground to make course calculations and feed navigation data to an AGC (Apollo Guidance Computer) onboard the spacecraft. The AGC would only perform specific tasks such as guidance, navigation, and spacecraft control.

While the mainframe computers were the size of a car, the AGC was compact, weighing only 70 lbs (approximately 32 kgs) and taking up less than 1 cubic foot of space.

The IBM mainframe computers on the ground (left); The AGC onboard the spacecraft (right). Photo courtesy: NASA

Another major issue with the computers was the integrity of the memory. There were concerns that the AGC’s memory could be compromised due to a potential Soviet attack.

To build a memory that could not be erased, modified or corrupted in any way, MIT used a technique called rope memory, where small iron rings had wires running through them.

A wire running through the center of the ring represented ‘1’, whereas a wire that ran outside represented ‘0’.

Over eight weeks, the program was literally weaved into the memory by skilled seamstresses who wove wire-carrying needles through the iron rings, one wire at a time.

A year later, NASA launched Apollo 8—the first crewed spacecraft to leave the Earth’s orbit, reach the Moon, orbit it, and return.

Following the success of Apollo 8, on May 18, 1969, NASA launched Apollo 10 as a “dress rehearsal” to the actual lunar expedition. The Apollo 10 crew was tasked with testing all the elements of a moon landing, without actually descending onto the lunar surface.

All that was left to do was launching the mission that landed humans on the moon.

The three-stage 363-foot rocket used its 7.5 million pounds of thrust to propel itself into space. 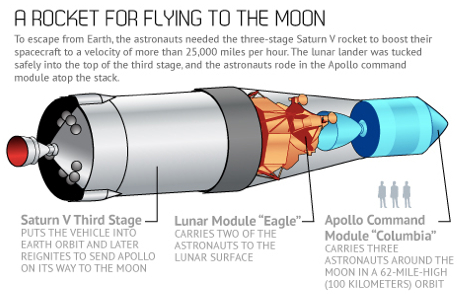 The three-stage rocket that flew humans to the moon.
Photo courtesy: NASA

Everything was going smoothly and the Lunar Module (LM) “Eagle” was on its way to land on the moon, roughly 46,000 feet away, when things suddenly went awry.

Minutes before the LM was about to land, the AGC had crashed. The screen went blank.

When the program alarm 1202 flashed on the screen, it sent the astronauts in space as well as the entire Mission Control at Houston into a panic. During their simulations, the astronauts had never come across either of these errors and didn’t know whether to keep going or to abort the mission.

Over the next seven and a half minutes, the alarms went off five more times.

With the Eagle rapidly descending, a decision had to be made quickly.

In Mission Control, mission guidance officer Steve Bales immediately called his colleague Jack Garman, an engineer who sat in a backroom and maintained computer error codes on his console as a cheat sheet.

Garman’s reply to Bales gave the astronauts a go ahead.

Overloaded with Data, the AGC Does What It Was Built to Do

Computers in the 1960s had less computing power than the smartphones of 2019. When the AGC was overloaded with data, it dropped everything else to perform its core function—navigate and guide the astronauts.

Dropping the other functions required a system reboot, which is why the AGC flashed the 1202 alarm. With every overload, the AGC dropped more low-priority programs and rebooted to continue navigation and guidance. Mission Control relayed the same to the astronauts in the LM and the mission to moon went on.

That’s when a more dangerous problem confronted the astronauts.

With Two Minutes to Land (or Crash), Things Go Out of Control

As the astronauts were occupied with decoding the program alarms, they overshot the intended landing area in the Sea of Tranquility by several miles.

With just 1,500 feet to go, Commander Neil Armstrong finally looked through the window display. That’s when he realized that the Eagle was speeding towards a crater with steep sides. 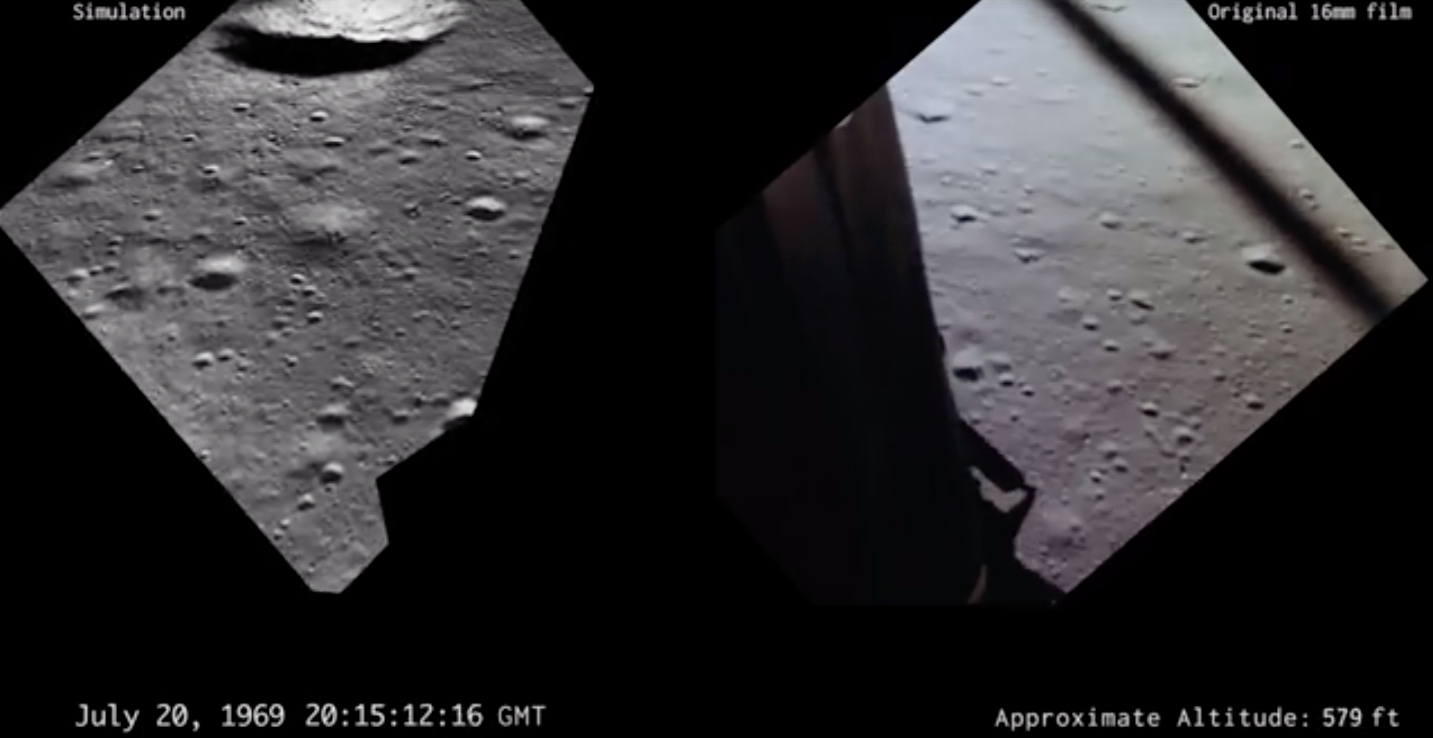 A NASA video shows the difference between simulations on the ground to the actual moon imagery while landing.

The spacecraft was also quickly running out of fuel—just 60 seconds of fuel left—and headed towards a deep lunar pit full of boulders bigger than a bus.

It was also too late to retarget the AGC for finding a more suitable landing point.

That’s when data and years of extensive experience came to the rescue.

Charlie Mars, a NASA engineer at the Kennedy Space Center

With no computer to rely on, Neil Armstrong took manual control of the Eagle and tapped into his experience as a pilot to fly The Eagle like a helicopter. With minutes left and the fuel levels dangerously dropping, he kept his cool and trusted his experience.

Buzz Aldrin supported him by continuously monitoring altitude data from the AGC console. Together, they calculated manually the right spot for landing the Eagle without crashing.

Thanks to their calculations and skills, the Apollo 11 astronauts had found the nearest spot to land in the Sea of Tranquility.

Houston, Tranquility Base here … the Eagle has landed.

The efforts, dedication, and composure of the astronauts in the final moments of the mission was the reason why humans made it to the moon successfully.

Without them, the outcome would have been completely different.

The rest, as they say, was history. 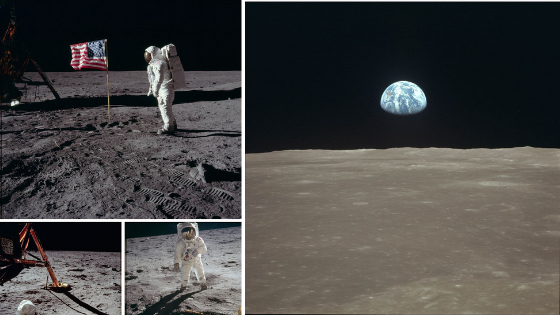 Neil Armstrong planting the U.S. flag on the moon (left); the Earth as observed from the moon (right). Photo courtesy: NASA

After a flight of 195 hours, 18 minutes, 35 seconds, the Apollo 11 mission successfully returned to Earth and safely splashed down in the Pacific Ocean.

NASA had kept its promise to the late President Kennedy with still a few months to spare. 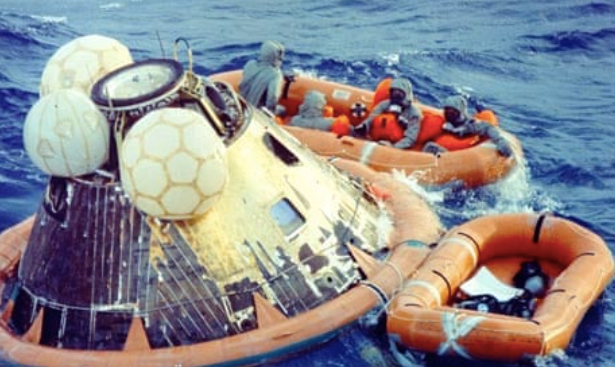 The moon landing was a success due to the efforts of over 400,000 people from several organizations nationwide, working tirelessly.

From engineers, scientists and technicians who built the spacecraft to the incredible astronauts who landed Apollo 11 on the moon, humans of data were there at every step of the way. Thanks to their efforts and dedication, we were able to finally set foot on the moon.