Heroku and CircleCI : Automated CI/CD Process for a NuxtJS 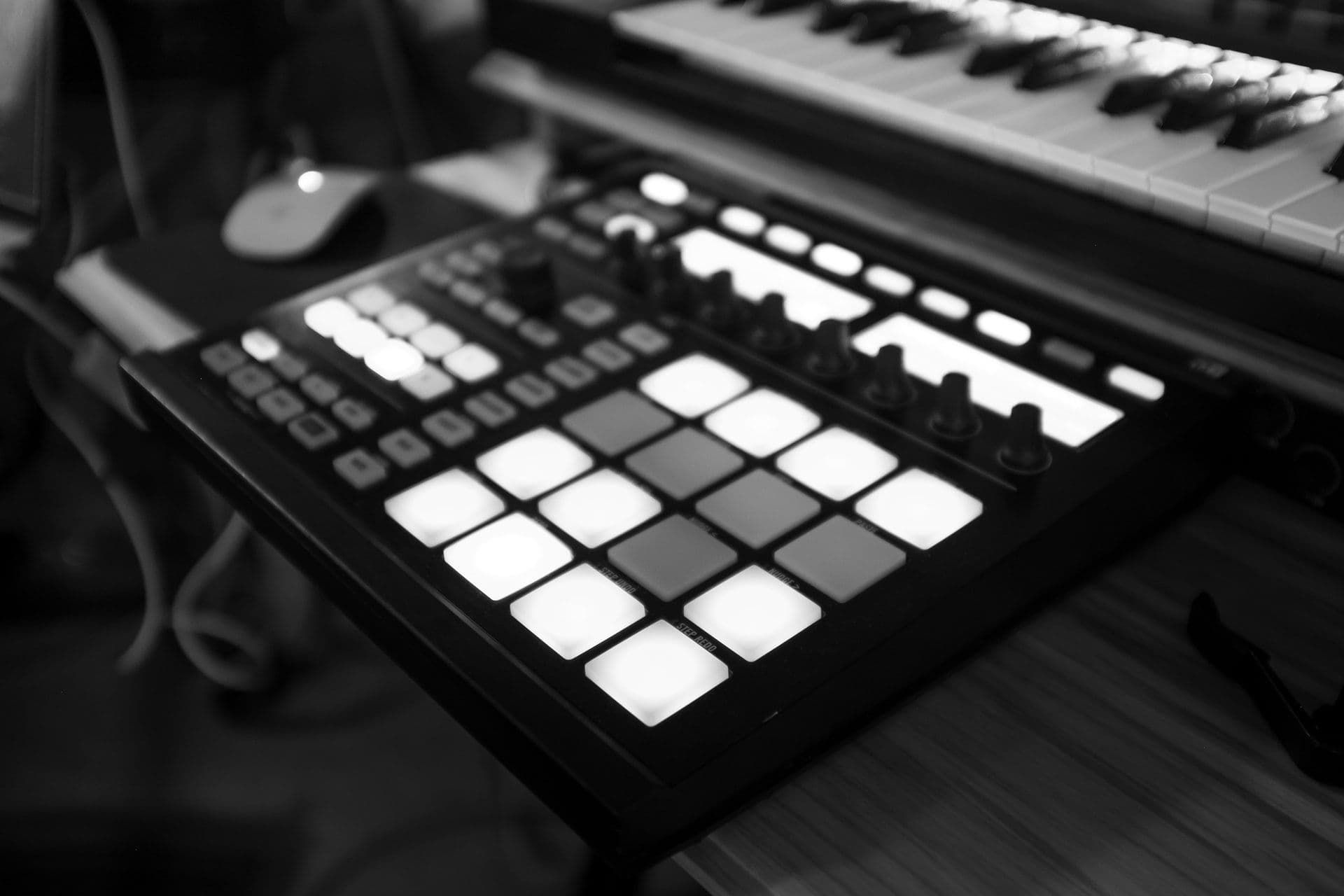 Published with permission from Alvin Lee.

Manually deploying a NuxtJS project is pretty easy when teams are small. However, as projects and teams grow they usually turn to CI/CD in their DevOps to automate their testing and deployment. This is when deployments—and the setup of deployments—can get complicated.

In this article, we’ll look at how to easily set up an automated CI/CD system for a NuxtJS project using Heroku and CircleCI. We’ll walk through all the details from setting up your GitHub repository to automating your tests to pushing your code changes. Then we’ll look at some suggested next steps.

First, here is a little background on NuxtJS, and why developers might choose it as part of their stack.

When Vue.js was first released, developers fell in love. With its simple template syntax and component structure, Vue.js makes it easy to spin up beautiful single-page applications (SPAs) with ease. However, developers soon realized that SEO was a problem. Since SPAs are deployed as a "shell" and the content isn't inserted until runtime, they learned it could be difficult for search engines to accurately index the contents. Because of this, developers needed a solution for handling server-side rendering (SSR) of their Vue.js applications.

NuxtJS is an open-source framework that combines all of the oft-used Vue.js libraries, bundling in Vue Router, Vuex, and Vue Server Renderer to provide Vue.js developers with the architecture for a smoother development experience. With NuxtJS, developers can get an SEO-friendly Vue.js application (with SSR) up and running within minutes.

Now let's look at our sample project and deployment setup. For this project, we’ll be using GitHub as our repository, Heroku as our host, and CircleCI as our CI/CD tool. Heroku is a PaaS solution that makes it easy to deploy and manage apps. CircleCI provides cloud-based CI/CD, running automated jobs in containers as soon as project code is pushed to GitHub. These jobs perform tests, send success or failure notifications, and then deploy built applications to cloud service environments.

In the end, we want our outcome to be: When we push our master branch to GitHub, an automated process will run all of our tests and then (if all the tests pass) deploy the application to Heroku.

To that end, I'll take you through the following steps:

Sound pretty simple? It will be. Let’s go!

1. Set up a GitHub repository

We will set up a GitHub repository to house our project code. Later, we’ll connect our GitHub account with our CircleCI account. Whenever we push code to GitHub, this action will trigger a webhook to notify CircleCI to begin the CI/CD automation process.

On the “Your Repositories” page in GitHub, click on the “New” repository button.

Choose any name you’d like for this private repository. For this tutorial, we will call our repository 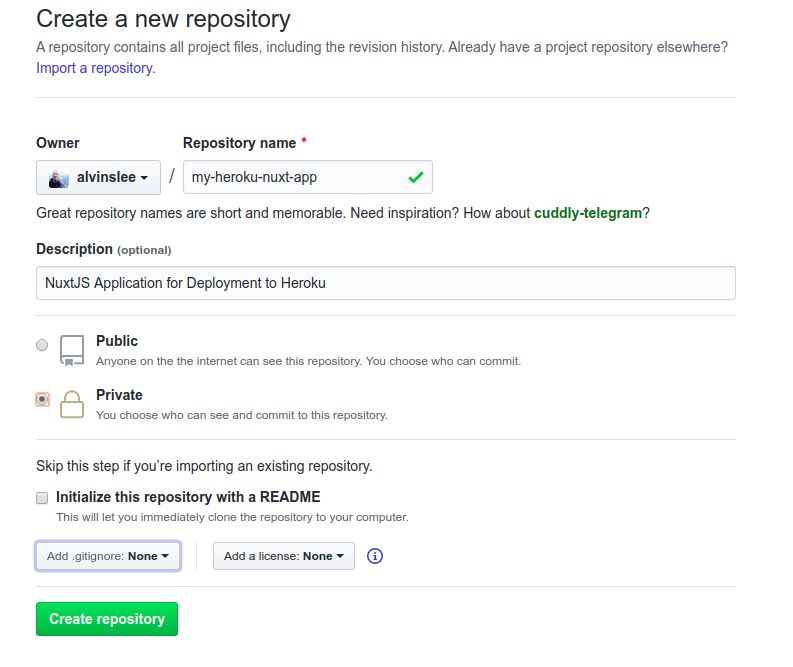 Click on “Create repository” to finish up. Then, clone the repository on your local machine. In the command below, make sure to use your own GitHub username. Notice that we are cloning the empty repository into a folder called

Excellent. Now that we have our app folder, let’s fill it up with a shiny, new NuxtJS application.

Just for your reference, we will be using Node.js v10.20.0 throughout this tutorial. We’ll also be using yarn as our package manager.

From within your app folder, run the following command to create a new NuxtJS application:

The interactive prompts will ask you to choose some options. You can chose whatever you’d like for “Project name,” but it’s important that you choose the options which I have shown in bold above.

By the way, if you would like to use

Verify that your application works by running

from the command line. Your browser window should look like the following: 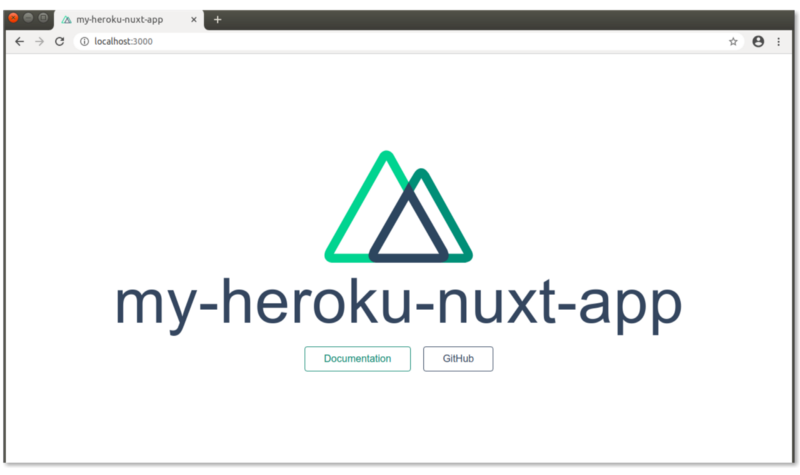 Great! Now that our application is up and running, let’s write some tests.

3. Create the Tests for Our NuxtJS Application

We’ll write tests just for our

page. Keep in mind that we are not planning to build anything beyond this basic boilerplate NuxtJS application. Our goal is to learn how to automate testing and deployment to Heroku.

For testing, we'll use Jest, which is a popular JavaScript testing framework. It's easy to use and lightning fast. When we created our NuxtJS application above, we opted to bundle in Jest.

folder, create a new test file called . We will write three tests which verify that our page has certain content.

Let’s run our tests. We won’t be concerned about test coverage, so let’s include the -

Now, with tests working, let’s check in our code:

Nicely done. Now, we have a NuxtJS application with a few tests (which are passing), and we’ve pushed our

4. Manually Deploy Our Application to Heroku

Before we build in automation, let’s walk through a basic, manual deployment to Heroku. This will help us understand what we’re doing later on when we automate deployment through CircleCI.

If you don't already have one, set up a new account with Heroku. The free plan will work fine for this example. Then, log into  your account. From the dashboard, click on “New” and then “Create new app”.

Choose a name for your application. For this tutorial, we’ll go with the same name that we’ve been using thus far. Note that app names on Heroku must be unique across their system. So, it’s possible that

is not available. If that’s the case, choose another name and take note of that for substitution as we go through this tutorial. 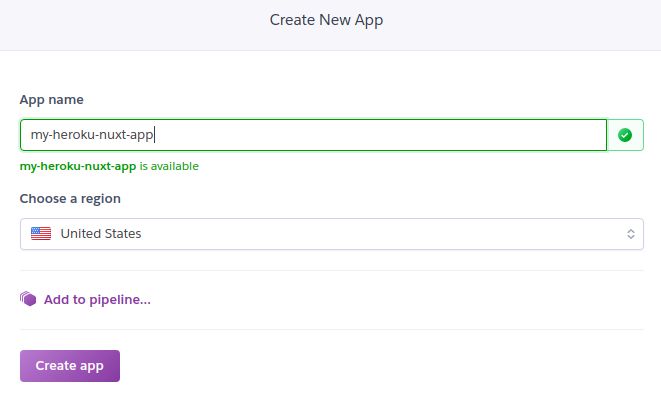 After the app has been created, you will see app deployment settings. We will be using the “Heroku Git (Use Heroku CLI)” method for deployment. We’ll use this as we deploy manually from our local machine command line, and then we’ll configure CircleCI to deploy via the command line, too.

Since our GitHub repository for this project already exists, we want to add the new Heroku remote. Make sure to use the Heroku application name that you chose above, if

Next, we want to set a few Heroku configuration variables to get our production deployment running. These instructions come from the NuxtJS documentation on deploying to Heroku.

Now, we can push our NuxtJS application to Heroku for deployment.

The command above is where all of the magic happens. Heroku detects that this is a Node.js app, and then it creates the proper deployment environment and installs all dependencies. After installing dependencies, Heroku also runs the

script command found in your  — this bundles all of the files needed for the client and for the server.

When we visit the URL for our Heroku app, we see our NuxtJS application up and running on the web: 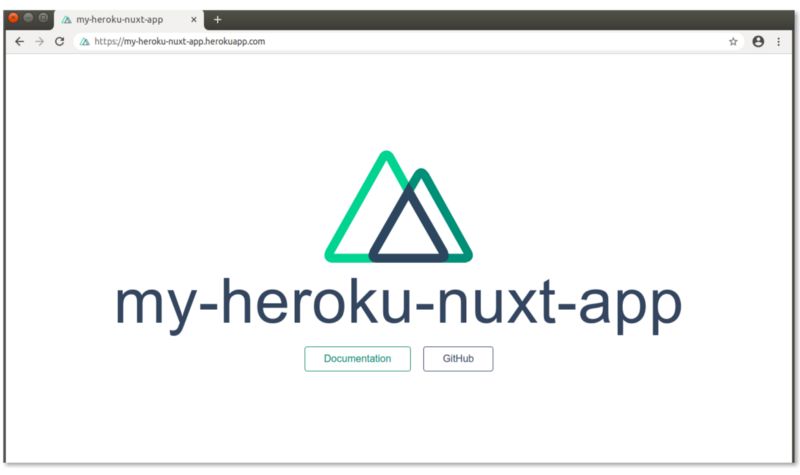 Just like that… our NuxtJS SSR application has been deployed to Heroku and is live. All that’s left to do is build in automated CI/CD through CircleCI.

5. Set Up Automated Testing with CircleCI

By logging in with GitHub, you authorize CircleCI to access all of your repositories. Within CircleCI’s dashboard, you’ll be able to select which of your GitHub repositories you want CircleCI to monitor.

From the CircleCI projects dashboard, you will see your GitHub repository named

— click on the “Set Up Project” button to its right. 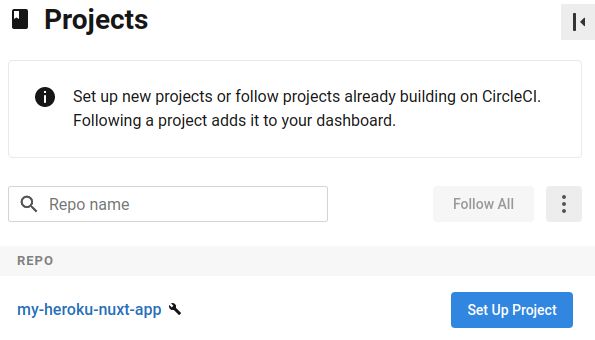 CircleCI will choose a config template for you to start with (by default, it chooses the “Hello World” template). Shortly, we'll provide our own CircleCI config file. For now, select “Hello World” and click on “Start Building”: 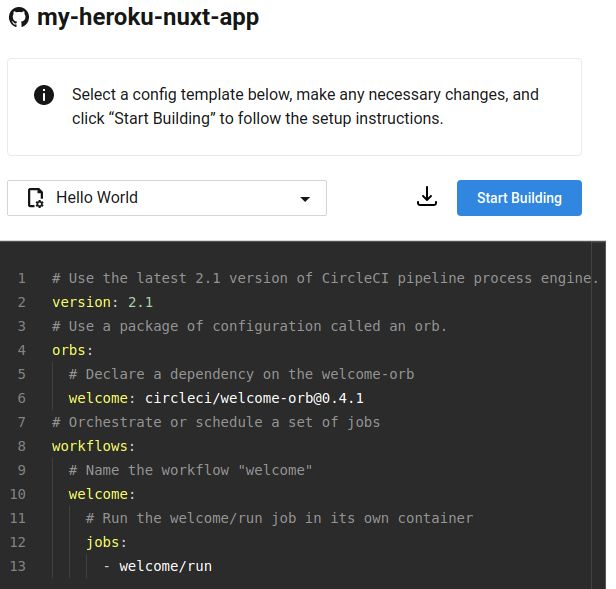 This will pop up a modal saying that CircleCI will create a new branch and add this config template to that branch. But, we don’t need CircleCI to do this for us, so select “Add Manually”. 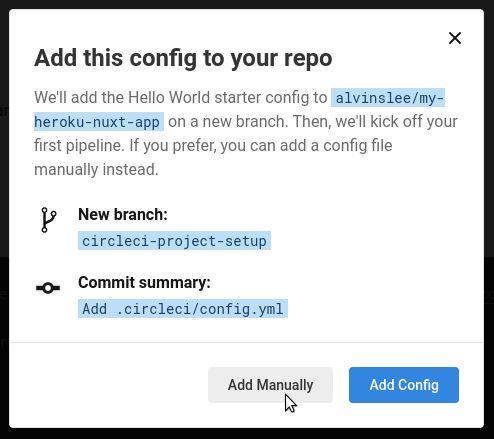 We’re told that we will need to create a

sub-folder in our repository root folder, and then add a to that sub-folder. That’s what we’re about to do. We don’t need to download the template file, since we’re going to write our own. So, just click on “Start Building”. 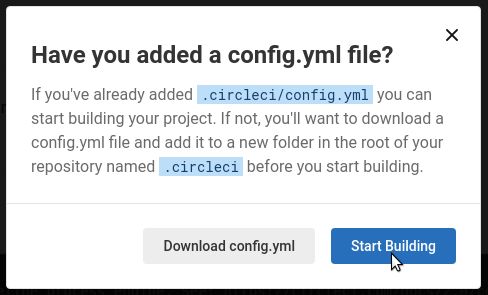 CircleCI will immediately execute a workflow for this project. You’ll notice that this first build attempt fails. That’s because CircleCI is looking for the

file in the  sub-folder of the branch of your project repository. That file doesn't exist yet, so let's create it now.

In your project root folder, create a new sub-folder called

In that folder, create a new file named

. We’re going to break this part of the tutorial into two separate parts. First, we’ll configure CircleCI to run our tests. Then, after we get that up and running, we’ll move on to configuring for Heroku deployment.

should be the following:

Let’s walk through what the above configuration does:

You may have noticed that CircleCI will call

from within our project folder to run the test suite. But we haven’t defined in our script commands yet. We'll define that command with an extra flag that tells Jest to run in continuous integration mode. This affects how Jest handles snapshot tests. Though we don't have any of those in our project right now, you'll want to keep this in mind in case you write snapshot tests for your projects in the future.. Since we’re updating our file, let’s also turn off code coverage testing when running Jest:

file and our updated file to git staging, and then commit them.

We push our new commit to

Within a few seconds, you should see a new pipeline entry on your CircleCI dashboard for this project. The

workflow for your project, on the branch, will begin executing. It will execute the first and only job, which is to . Our tests should pass, and everything should be green.

6. Set Up Automated Deployment to Heroku

For our final step, we want to configure CircleCI to deploy the code to Heroku when our tests pass.

To do this, we need to modify our

file with the CircleCI configuration. We will make use of CircleCI’s Heroku orb. CircleCI Orbs are reusable packages used to simplify configuration. CircleCI has a huge registry of pre-built orbs which simplify integration with third-party technologies (like Heroku). Our updated should look like the following (changes in bold):

Here is what we’ve added: 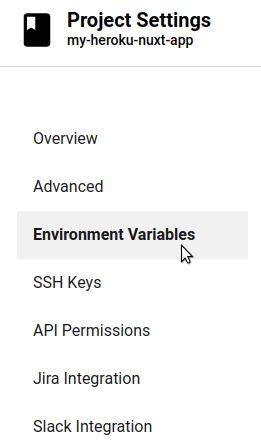 We need to add two environment variables. The first is

, which can be found at your Heroku account settings.

The second environment variable we need in CircleCI is

, which is the name of the Heroku app that you established when creating the app. (For our tutorial, it’s .)

After adding these two environment variables, your CircleCI project settings should look similar to below:

Now that we’re all set, we can stage and commit our updated

file to git, then push to GitHub:

When we do this push to GitHub, here is what happens:

And there you have it. You have just set up complete CI/CD automation of your NuxtJS SSR application. By simply pushing your project to GitHub, your project tests will run, and your project will deploy to Heroku.

Let’s quickly review what we did:

You now have the foundation you need to take this to the next level. From here, what might be some next steps you could take to build on this new knowledge?

Because deployment of NuxtJS SSR applications to Heroku is so quick and simple, you reduce the friction you’ll encounter when it’s time to go live. And, with CI/CD baked into your development process, you free up yourself and your team from another checklist of things to do when it is time to ship your code.