Co-founder and CEO at Next.Exchange

Exchanges play a key role in the cryptocurrency economy. They provide market liquidity, and customers the ability to purchase digital assets with relative ease and low costs. Ideally, they also provide peace of mind, additional tools to assist in buying and selling, and more benefits for traders.

You may be familiar with ‘centralized exchanges’ already as they make up both a majority of exchanges, as well as a large part of the total trade volume across all exchanges.

Hybrid exchanges and solutions are starting to make headway in 2019, attempting to enter the spotlight with their “best of both worlds” approach - but the greatest challenge relates to getting people to understand what they offer, as well as what sets them apart from their predecessors and competitors.

I have written this guide to help distinguish between the three in an objective way, however note that I possess a small bias which will be explained at the end of the article.

The majority of exchanges on the market right now are (and historically have been), at their core, centralized. As such are generally referred to as the ‘traditional’ form of a crypto currency exchange.

A January 2019 report from TokenInsight, based on data collected from over 400 exchanges concluded that not only do centralized exchanges make up the majority of exchanges, but they comprise over 99% of all trade volume.

Centralized exchanges are defined by the fact that all trades are processed through an account / wallet that is operated by the exchange as an intermediary. Rather than peer-to-peer (between wallets for which the respective traders are accountable), the centralized exchange acts as a custodian of the user’s digital assets.

Because these intermediary-operated wallets are always connected to an online network - they are referred to as ‘hot wallets’ and as such, act as ‘honey pots’. This attracts thefts from hackers or fraud from internal agents.

Furthermore; the lack of transparency regarding funds, volume etc has lead to a wide-spread issue where exchanges have been found to be submitting fake reports and numbers to data aggregators such as CoinMarketCap. 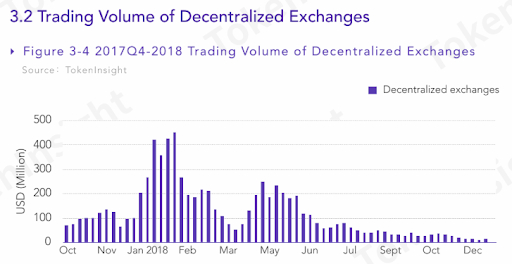 Decentralized exchanges do not use centralized intermediary for transactions, and instead allow buyers and sellers to locate and transact with each other directly on-chain. Trades happen wallet-to-wallet or peer-to-peer.

They rose to prominence in January 2018, the month during which they reached their highest trading volumes. Since then, whilst the number of exchanges has grown - the trading volumes and active user counts are minimal.

Most recently, we have seen the emergence of a new approach to cryptocurrency exchanges - seeking to forge a middle ground between the dichotomy of ‘centralized’ and ‘decentralized’ exchanges with a new “best of both worlds” approach.

Hybrid exchanges seek to combine the liquidity, functionality and customer support functions of traditional centralized platforms - with the security and sovereignty / privacy of decentralised exchanges.

To achieve this: an order book is operated on-chain in which all transactions are immutably recorded and presented on a relevant Blockchain transaction explorer - whilst the function of the exchange is to calculate the priority of transactions (based on value and fee adjustment).

Tokens are never left sitting on an exchange ‘hot wallet’, which is typically overseen by management, but  are instead moved directly from account-to-account; peer-to-peer - increasing security from theft and removing human risk that can result in wash trading and misappropriation of client funds.

Conclusion: What Do I Think?

My name is Gleb Jout and I am the recently appointed Chief Executive Officer at NEXT.exchange, a hybrid exchange based in the Netherlands and Alpha launched in 2018 (with additional registration in England and Wales) that will be operating on its own Blockchain, NEXT.chain.

NEXT.exchange is a hybrid cryptocurrency exchange (HEX) which provides all traders with their own individual wallets and ultimately access to private keys for each respective cryptocurrency - with the aim of giving every trader sole control over their wallets. The exchange is currently in community beta, for a recent update, click here.

NEXT.chain (with PoW, PoS and ITC layer) acts as the foundation upon which the NEXT.exchange hybrid trading platform will operate.

We built our own chain because we don’t believe that most “active” blockchains on the market right now are capable of handling the number of transactions required by what we consider to be a mass and growing market. It also means that we can identify and address any potential areas for improvement in security, without having to wait for action from a ‘parent chain’.

Here is a quick summary of some of the other benefits from NEXT.exchange which you won’t find together elsewhere.

Related Stories
Subject Matter
Earn Crypto Rewards Monthly by @Mysterium Network
#promoted
Numbers Don't Lie But They Are Easily Misinterpreted All The Time by @doublex
#statistics
Evolution of Crypto-Exchanges From CEXs to DEXs: The Journey From Mt. Gox to Uniswap by @ricc
#crypto-exchanges
Solar Glass: The Energy Generation Solution Cities Need to Go Green by @scotthickman
#technology
Identity Theft and the Dangers of Home Title Theft by @brianwallace
#home-title-theft
Stop Thinking Big and Start Thinking About the Daily 1% Improvement by @kevon
#founder-advice