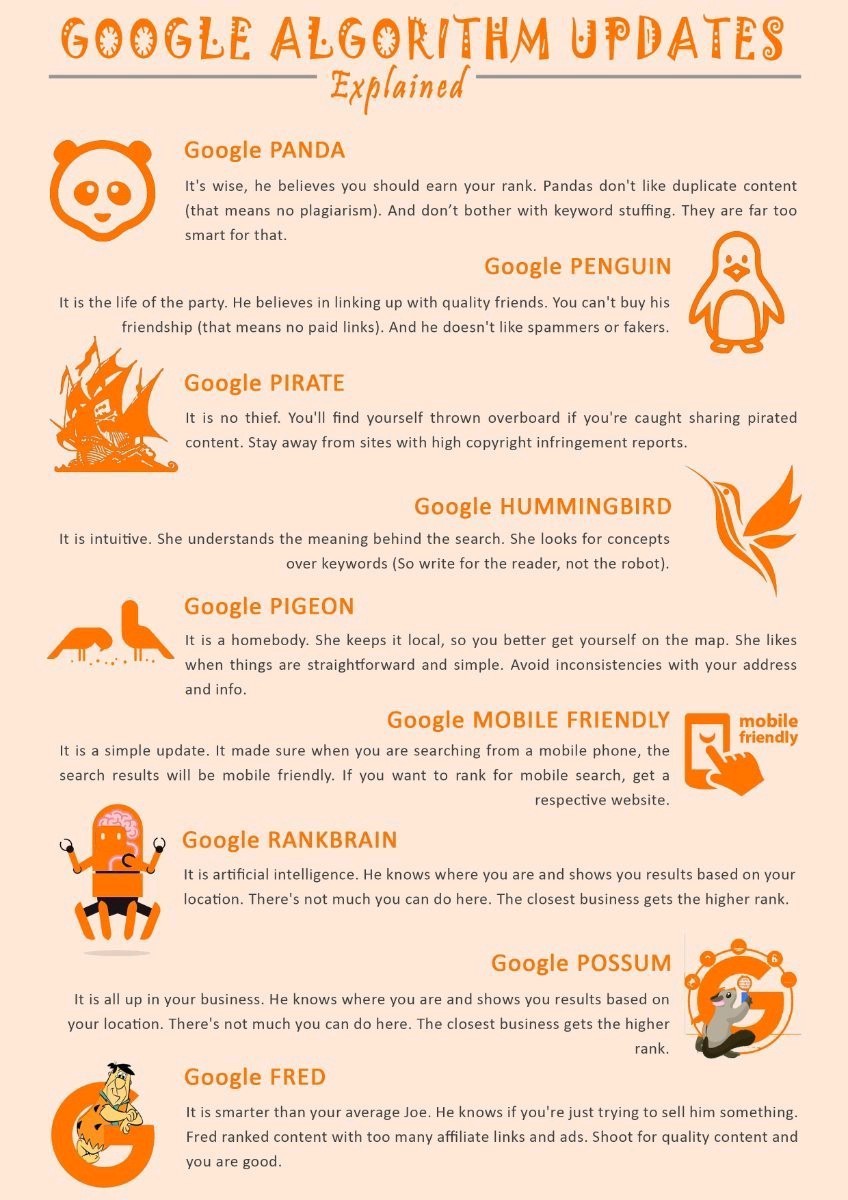 It’s wise, he believes you should earn your rank. Pandas don’t like duplicate content (that means no plagiarism). And don’t bother with keyword stuffing. They are far too smart for that.

How it works: Panda assigns a so-called “quality score” to web pages; this score is then used as a ranking factor. Initially, Panda was a filter rather than part of Google’s ranking algo, but in January 2016, it was officially incorporated into the core algorithm. Panda rollouts have become more frequent, so both penalties and recoveries now happen faster.

How it works: It’s a way to avoid sites that were “top heavy” with advertisements from positioning well in Google search listings. Top Heavy is updated repeatedly, and at the point when a Top Heavy Update occurs, websites that have evacuated extreme advertisements may recapture their lost rankings. New sites considered as “top heavy” may get caught again with new Top-heavy update.

Hazards: Pages With Too Many Ads

It is the life of the party. He believes in linking up with quality friends. You can’t buy his friendship (that means no paid links). And he doesn’t like spammers or fakers.

How it works: Google Penguin’s objective is to down-rank sites whose links it deems manipulative. Since late 2016, Penguin has been part of Google’s core algorithm; unlike Panda, it works in real time.

It is no thief. You’ll find yourself thrown overboard if you’re caught sharing pirated content. Stay away from sites with high copyright infringement reports.

How it works: Google has many different types of algorithms to help target different aspects of the web. This helps to ensure the results it delivers are the best results possible. ‘Pirate’ is one of these algorithms and is very similar to both the Panda (which is an algorithm that targets content) and Penguin (which is an algorithm that targets links) however, Pirate targets and demotes sites that Google recognises to be in direct violation of the Digital Millennium Copyright Act (DMCA).

Pirate filter is periodically updated. When this happens, sites previously impacted may escape, if they’ve made the right improvements. The filter may also catch new sites that escaped being caught before, plus it may release “false positives” that were caught.

How it works: The EMD (Exact Match Domain) Update is a filter used by Google to impede low quality sites from positioning admirably just on the grounds that they had words that match search terms in their domains. At the point when a crisp EMD Update happens, sites that have enhanced their content may recover great rankings. New sites that comprise poor content or all those that were previously missed by Google EMD updates may get caught. Likewise, “false positives” may also get discharged.

The Payday Loan algorithm mainly targets mostly traffic fetching keywords like loans, casinos, Sex-related topics and other keywords that are often targeted by spammers to increase the visibility of their web pages. Google doesn’t like spammy content and keywords stuffing.

How it works: Payday Loan algorithm is unrelated to Google’s Panda or Penguin algorithm’s.The main aim of the Payday version 2.0 algorithm is to update targeted spammy sites, whereas the new version 3.0 mainly follows spammy queries.

It is intuitive. She understands the meaning behind the search. She looks for concepts over keywords (So write for the reader, not the robot).

How it works: Hummingbird helps Google better interpret search queries and provide results that match searcher intent (as opposed to the individual terms within the query). While keywords continue to be important, Hummingbird makes it possible for a page to rank for a query even if it doesn’t contain the exact words the searcher entered. This is achieved with the help of natural language processing that relies on latent semantic indexing, co-occurring terms and synonyms.

It is a homebody. She keeps it local, so you better get yourself on the map. She likes when things are straightforward and simple. Avoid inconsistencies with your address and info.

How it works: Pigeon affects those searches in which the user’s location plays an important part. The update created closer ties between the local algorithm and the core algorithm: traditional SEO factors are now used to rank local results.

It is a simple update. It made sure when you are searching from a mobile phone, the search results will be mobile friendly. If you want to rank for mobile search, get a respective website.

How it works: Google’s Mobile Update (aka Mobilegeddon) ensures that mobile-friendly pages rank at the top of mobile search, while pages not optimized for mobile are filtered out from the SERPs or seriously down-ranked.

It is artificial intelligence. He knows where you are and shows you results based on your location. There’s not much you can do here. The closest business gets the highest rank.

How it works: RankBrain is part of Google’s Hummingbird algorithm. It is a machine learning system that helps Google understand the meaning behind queries, and serve best-matching search results in response to those queries. Google calls RankBrain the third most important ranking factor. While we don’t know the ins and outs of RankBrain, the general opinion is that it identifies relevance features for web pages ranking for a given query, which are basically query-specific ranking factors.

It is all up in your business. He knows where you are and shows you results based on your location. There’s not much you can do here. The closest business gets the higher rank.

How it works: The Possum update ensured that local results vary more depending on the searcher’s location: the closer you are to a business’s address, the more likely you are to see it among local results. Possum also resulted in greater variety among results ranking for very similar queries, like “dentist denver” and “dentist denver co.” Interestingly, Possum also gave a boost to businesses located outside the physical city area.

It is smarter than your average Joe. He knows if you’re just trying to sell him something. Fred ranked content with too many affiliate links and ads. Shoot for quality content and you are good.

How it works: The latest of Google’s confirmed updates, Fred targets websites that violate Google’s webmaster guidelines. The majority of affected sites are blogs with low-quality posts that appear to be created mostly for the purpose of generating ad revenue.

Google confirmed on Twitter (August 1, 2018) that it released a “broad core algorithm update” this week.

Each day, Google usually releases one or more changes designed to improve our results. Some are focused around specific improvements. Some are broad changes. Last week, we released a broad core algorithm update. We do these routinely several times per year.

As with any update, some sites may note drops or gains. There’s nothing wrong with pages that may now perform less well. Instead, it’s that changes to our systems are benefiting pages that were previously under-rewarded.

There’s no “fix” for pages that may perform less well other than to remain focused on building great content. Over time, it may be that your content may rise relative to other pages.

It’s a part of broad core algorithm. It started rolling out on the 1st of August 2018, and finished about a week later.

It was initially called “Medic” as a large % of the sites affected were in the Medical/Health sector, but Google later announced it wasn’t industry/term/location specific, and was in fact a core algorithm update aimed at Quality that could affect any site/page/topic.

Google seems to have implemented an unsupervised machine learning algo, which had been fed with inputs from Google’s quality raters. As the raters’ guidelines leaked into the public a long time ago, Google’s newest move should not surprise anybody.

Unfortunately, many sites outside of the YMYL world have been affected negatively by the last update. Even big news portals are amongst them. Collateral damage, you know.

How to Delete Your Browser History 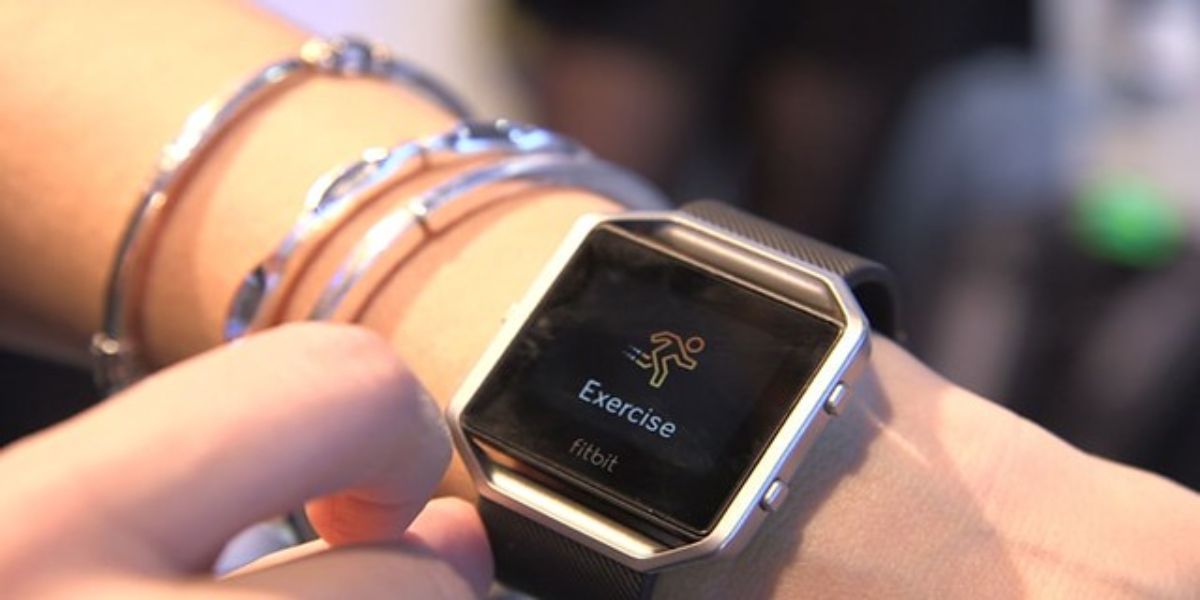