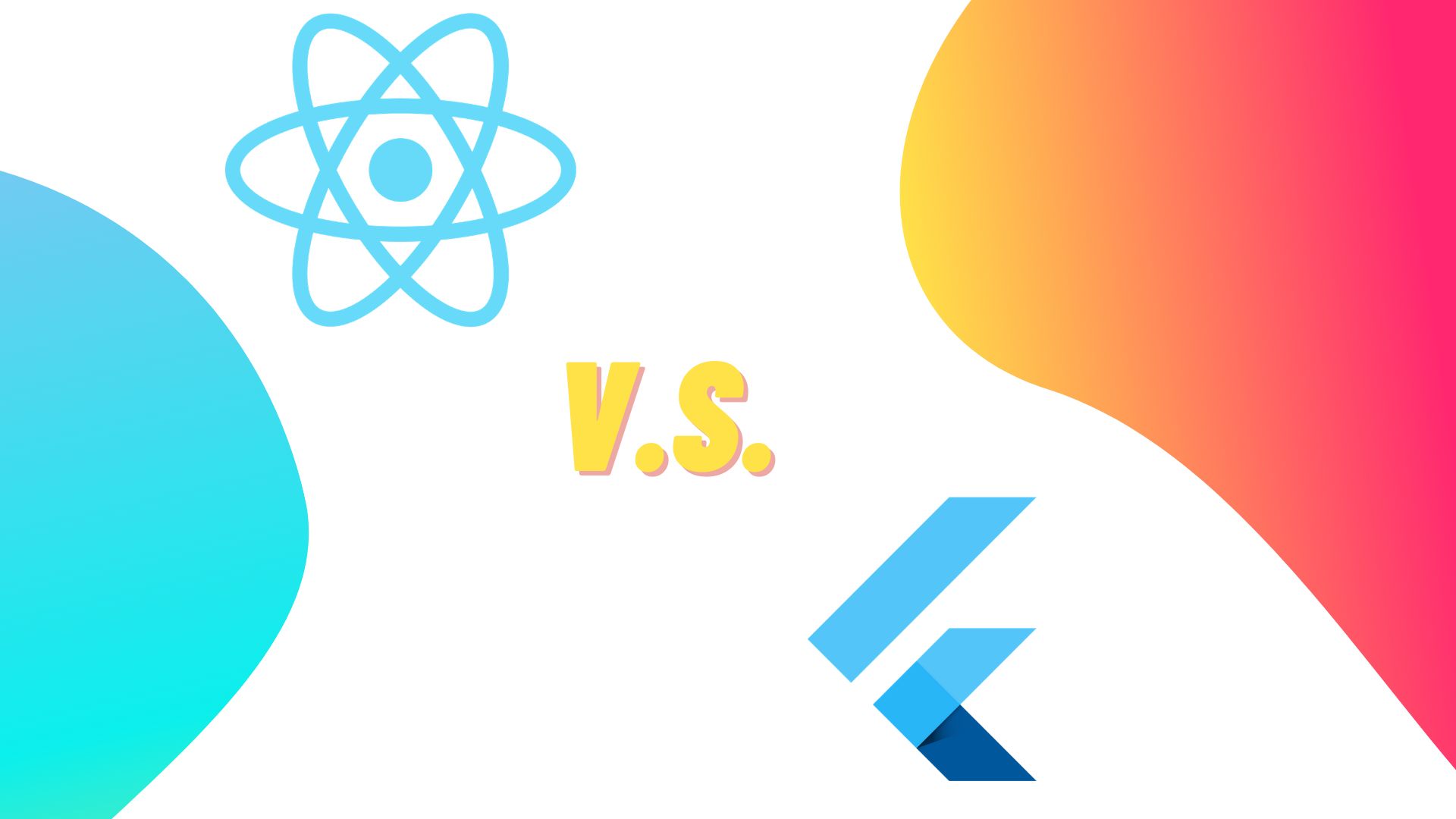 When it comes to cross-platform mobile application development, mainly two mobile development tech frameworks strike our mind. They are React Native and Flutter app development framework. As many top companies as well as businesses are opting for modern technology, they are more focused on mobile app technologies more now than ever. Due to this, the demand for mobile apps has increased to a large extent. There are more than 2.5 billion smartphone users worldwide, so it is inevitable that businesses and companies will shift their minds towards mobile application development.

Now in order to stay efficient and relevant in the mobile app development market, one must know and opt for the best mobile development technologies. This is why the developers strive towards modern technologies to stay close to the trend of the market and provide the solution based on modern techs. Now, coming to the two most popular mobile app development techs flutter and React Native; React Native has a slight upper hand in the market based on its age as well as the community. However, flutter is slowly gaining ground as more and more companies and businesses are opting to switch to the flutter app for their mobile app service.

Flutter on the other hand was introduced by Google in 2018. It is quite young in comparison to React Native but in no time has gained popularity which is still growing. Flutter helps developers in creating beautiful native applications and helps them in developing cross-platform apps with ease. The framework is based on dart programming language which is somewhat similar to Java as well as JavaScript. The developers are making an easy transition to flutter development as it has made the app development process much simpler with the introduction of widgets-based app interface development. It offers pixel-by-pixel app interface development tools that help the app look modern, beautiful, and intuitive.

Now, the question is which one is the best for you. Well, it really depends on what you define as the best. The one which is the best one for you might not be for the other. So, here we present to you some comparison between React Native and Flutter based on different aspects that will surely help you get a better understand of the techs and in long run help you decide which one best suits your requirement.

Both React Native, as well as Flutter, has support for reusable codes. In React Native, we term the usable code as components. The custom components can be built and can be imported in any number of views or components themselves in which they are required. We can configure the component rendering elements and data by sending props. The bottom line is that each component built can be modified based on props and used on any screen multiple times.

The idea is the same for Flutter as well. But here, we term the reusable code as custom Widgets. There are two types of widgets in a flutter, they are Stateful widgets and Stateless widgets. The stateful widgets are the widgets in which the values may change dynamically. In the stateless widgets, the state values do not change and remain static. Both widgets types can be implemented and reused. The components can be modified and configured based on parameters sent as well. They are very convenient and efficient to use.

Now in terms of third party libraries, React Native definitely has the upper hand as it has been up and running considerably more amount of time than Flutter. The React Native community is far more superior to that of Flutter for now. Due to this, there are more number of third party libraries for React Native than Flutter. However, one downside is that most libraries make frequent updates and some of them are not maintained. Hence, in React Native, you will have to recheck everything while updating the library as there may be breaking changes.

Though React Native has a higher number of libraries do not count Flutter out. The Flutter community is growing rapidly with more and more libraries coming out every month. There may be some issues in the libraries but they will definitely be sorted out as more developers are opting for Flutter development.

Based on community, libraries, and the time the technology came out, of course, React Native is more popular than flutter. Another reason can be its relationship with JavaScript whereas flutter and dart programming language are comparatively new in the business. But, there is no doubt that Flutter is gaining ground on popularity and definitely reach the level of React Native currently is in. If we talk about stats then Flutter has already gained 30,000 GitHub stars in the span of over 2 years and React Native has a total of 65,000 Github stars in the span of 6 years and running. Looking into this, Flutter has the ability to reach the popularity of React Native in a shorter time than React Native itself.

If we can see something that will make clear distinction between React Native and Flutter, then it is the User Interface. There is a huge gap between what they have in offer in terms of UI. React Native is based on native components where it provides the UI elements totally related to native UI whereas Flutter works with the widget sets and are the best for getting a customized UI design that will give dynamism and native support. If we compare in terms of looks then the winner will definitely be Flutter because it offers pixel to pixel UI customization with awesome widgets that are easy to use. But, when it comes to the overall user experience of providing the most customized and dynamic features, Flutter lacks a little whereas React Native excels in this area as the most dynamic framework for user experience. But, in the long run, it can be assumed that Flutter will definitely provide these deep customizations tools and techniques that every developer is looking for.

Development time is measured by the framework’s ability to provide ready-made solutions with quick and easy integration. Talking about which React Native is the most reliable tech for developing next-generation apps due to its quick and efficient way to add the user interface and implement the project as a whole with JavaScript logic. Flutter definitely takes more time into development because of the fact that it is a new tech and has comparatively less ready to use widgets. The quality of the user interface development is phenomenal in Flutter but the ready-to-use libraries are less in numbers and many developers can get stuck in the issue which may take a while to solve due to a comparatively smaller community. However, the development process in React Native is quicker due to the availability of ready to use components as well as a larger community to solve the issues that occur.

The performance of any mobile app is measured based on how fast the app’s UI elements are rendered into the app screen. Both React Native as well as Flutter applications have great performance efficiency. But, due to fact that React Native requires JavaScript bridge to interpret the native components and call the Native language interpreters like Objective C or Java to render the UI into respective platforms, React Native takes quite a bit of time to render out the elements to UI. Since there is additional work to be completed before rendering, React Native apps are a tad slower. Whereas, Flutter uses widgets to implement user interface instead of native components that make use of device GPU to render the UI on the screen. In addition, dart codes are directly compiled to run in the CPU of the device, which makes the flutter developed apps quite faster. Hence, Flutter takes it in terms of performance.

Stability is something every company and business house looks in a mobile application. Frequent changes in overall workflow and structure can be a hassle when migrating from one version to another. Since React Native has already made a mark in society with its features, community, and reliability, this mobile application development framework is more stable as of now. However, you may notice frequent updates in the libraries built for React Native. But overall, workflow remains stable and accurate. The Flutter is developing rapidly as a mobile app development framework but it has not quite made a reliable mark yet. It seems like there are some more versions and features to come before it becomes a stable framework. Finding libraries for some complex features can be a hassle when it comes to Flutter due to its relatively smaller community. Hence, React Native takes it for now as a stable framework among the two. But, Flutter is not far behind.

While React Native has already established itself as a reliable framework with many large companies opting for it for mobile application development, it is backed by some popular apps such as Facebook, Instagram, Airbnb, etc.

Flutter is no less as Google opting for it very recently. Likewise, more and more companies are opting for flutter nowadays due to its ability to create a state of the art apps with flawless UI. There may be competition among the two in the not so distant future. But for now, there are still many companies going to React Native than Flutter.

There is tough competition between both when it comes to toolkits. However, Flutter has extensive IDE’s with plugins for flutter and dart as well as compatibility with both Android Studio and Visual Studio Code. React Native also houses awesome toolkits as well but in comparison to Flutter the tools are changing and not well maintained.

Here, we have learned the pros and cons of both frameworks. It is quite difficult to decide which one is the best and there is definitely a strong competition between the two. React Native is the framework that has already made its mark and is continuously growing as well. Flutter is starting to blossom into an amazing mobile application development framework that most developers and companies will turn to in the near future. However, there are still some miles to go. As a matter of fact, the company that already has a JavaScript team for web development will definitely find it easier to transition to React Native the mobile counterpart. Flutter and dart would be new technology better suited for beginners familiar with languages like Java. Hence, both are the potential giants in the world of next-generation mobile applications. React Native has already shown and established its capabilities whereas Flutter is establishing its capabilities.

Related Stories
Subject Matter
Book a Demo. Ship Fast. Rest Easy. LaunchDarkly. by @LaunchDarkly
#promoted
How To Build WordPress App with React Native Part#15: Forwarding Message to Inbox by @krissanawat101
#react-native
Traditional Coding Vs. Low-Code: Which One Works Better For Your Business by @appery
#low-code
10+ Best Cryptocurrency & Bitcoin Exchanges in 2021 [Apr'21 Review] by @dmitry.leijko
#crypto
How to Write Your First PHP Code by @Bairesdev
#php
7 Benefits of Using Flutter For Your Next Software Development Project by @linkupstudio
#flutter
Why End a Sales Pitch Deck like the Dude Reading Disclaimers? by @David
#slogging