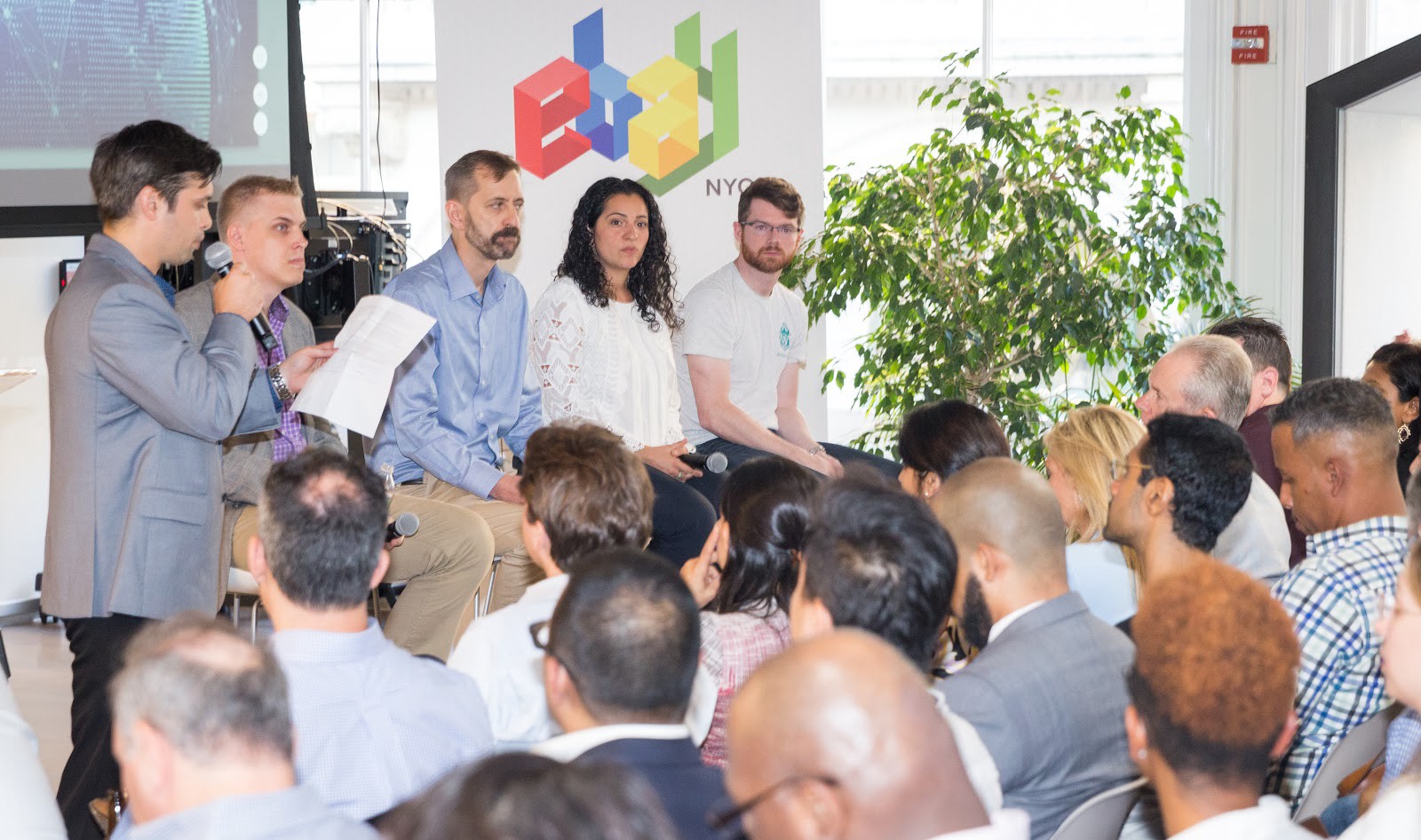 Last Thursday’s event, Blockchain Adoption in Business and Enterprise, held at eBay NYC on August 23rd, was one of the best quality events of the year. Organized by BlockchainNYC.org, the largest blockchain group in New York City, it was completely a sold out event with audience members from R3, IBM, Microsoft and more.

While the networking opportunities were phenomenal, the highlight of the event was the stellar panel of speakers from Hyperledger, Consensys/Ethereum, EOS, and BlockchainDriven. Audience members had the opportunity to speak with these insightful leaders of blockchain afterwards, but the real gem was the panel discussion.

Each of the speakers spoke about their respective companies, then moved onto the bulk of the event, discussing blockchain and distributed ledger technologies on an enterprise level. For those who missed it, here’s a full coverage of what these tech giants and what they had to share.

Karen Ottoni from Hyperledger cleared up some common misconceptions. “Hyperledger is a consortium, not a blockchain. It has 250 members plus an open source community of developers, 10 technologies, 5 frameworks and tools, most famously, Fabric.”

When asked about how Hyperledger can be applied as a blockchain solution for enterprises she responded that Hyperledger is a codebase for anyone to use that’s open source and for any industry. While not a blockchain and limited in scaling potential, there are tools to link frameworks, such as Quill, and in the future companies that start on Hyperledger may be able to hopefully scale to a blockchain.

Kevin Rose talked about EOS, a dApp development platform with only 21 nodes, which increases transaction per second having only a half second of block time for the end user. His stance for the evening was that, “blockchain is the foundation that nations will be built on. Innovation should be guided and fostered, not persecuted.”

Peter Borovykh, a consultant at BlockchainDriven (BCD), discussed his recent work travelling to emerging countries in Latin America, Central Asia, Eastern Europe, and more recently the Middle East. “Emerging countries are the ones with higher need and interest in blockchain. Few US companies are using revolutionary thinking to take data and transactions into the future. The US is severely lagging behind.”

Phil Kelly from Consensys, the largest blockchain company in the world and focused on Ethereum, cited that the blockchain field lacks talent, both in developers and in user experience/user interface (UX/UI).

Getting into questions many people ask, they gave their insights on what exactly a private blockchain is. Private blockchains are not as scalable though with currency fluctuations and privacy concerns, businesses such as those in highly regulated industries like healthcare are turning to distributed ledger technology (DLT) instead of blockchain, some with the intent to shift over to blockchain later in order to grow and scale up. Perhaps in the future it will be possible to scale up with DLT according to Karen, but Peter believed that custom built blockchains are the better solution for enterprises.

Kevin’s definition of blockchain was pretty open ended. “It allows anyone to store and exchange data and information that’s cryptographically secure while cutting out middlemen.” By Peter’s definition however, to decentralize and diffuse decision making for cost reduction across all layers, would mean that there really is no such thing as private blockchain as it lacks decentralization.

The opinions here clearly differed and companies looking to explore blockchain may ultimately have to decide what’s right for them keeping both short and long term benefits in mind.

Blockchain and DLT have the capabilities and potential to solve any number of issues companies face. “It increases efficiencies between parties. It’s a database we all agree on without trusting each other” said Kevin. On this the speakers Karen and Peter agreed calling blockchain a master record and reconciliation to ensure such and such happened without the back and forth. One record book, one network, which can ensure events and transaction.

Phil went deeper, citing identities as an an example of the cryptographic capabilities of blockchain. It is proof and information that you are in control of, you can choose what to disclose, to whom, and always have that information. “You can automate to trust without having to go through all the levels.”

But why should businesses consider blockchain?

“Basically it’s a database on crack.” Peter couldn’t emphasize this point enough and all the speakers came back to this statement. “Every detail is posted. It really is a database on crack. It can literally be applied to any industry where info is shared. But the privacy concern is unwarranted as everything is encrypted and you can choose what information is visible.”

Blockchain reduces transaction friction and costs. You can tokenize paper processes, and it’s easier to track and reconcile. Even for payroll. It’s easier to move funds without intermediaries drawing out the process.

“Incentives for validators are democratizing data within industries, businesses can focus on the human element and other efficiencies. On the enterprise level there’s so much happening that people don’t see. UX/UI is miles away from what it needs to be.”

On an interesting note, Consensys has responded to that issue by employing video game developers for UX/UI, a brilliant idea as they consider all aspects of user interaction and seamless engagement.

Peter was asked recently if there’s a UI for blockchain to help businesses understand what it is and what it can do. It’s capable of so much and that information is getting lost. Taxes, real estate identity, finances, retail, hospitality, logistics, shipping, so many decision makers aren’t sure what blockchain can do within these very different industries. It’s hard for people to wrap their head around it, like all new technologies, and while blockchain can do so much, it’s still far from complete.

Giving an interesting example of how blockchain is already changes lives, Kevin said, “In gaming, unique non fungible tokens exist which can represent in game items that can be traded and exchanged in real life. We have this already and it offers real life value to rare digital items, blowing up huge interest in collectibles translated into digital assets.”

Where is blockchain now and what are the limitations?

According to Peter, we need to build custom solutions as the existing are expensive. When Ethereum is down it’s the best thing for businesses because of gas, it’s cheaper, decentralized, public transactions. Kevin added that demand for use affects price. As new dApps come out, it drives the prices up. Phil agreed that we are seeing a huge new wave of growth.

Kevin brought up a very poignant issue that not many people in blockchain discuss:

“Smart contracts. How smart are they? Can they handle disputes? Who do I go to in an automated process? There’s still real logistical issues in dispute resolution.”

Peter felt confident that blockchain technology will see major improvements in the years to come however, as it’s a chance for emerging countries to catch up and surpass the developed world that hold 90% of the world’s capital, taking advantage of under utilized resources and wealth.

As the panel drew to a close, the speakers gave their final statements as the audience was eager to speak with them personally.

“EOS is an open software and customizable. I see EOS being the blockchain of choice.”

“Hyperledger is a codebase for anyone to use that’s open source and for any industry with community driven development.”

“Ethereum is public, frictionless, trustless. One level that brings about decentralization and avoiding censorship.”

“As a blockchain consultant with BlockchainDriven, I’ve realized the importance of going to the field and talking to stakeholders to figure out the problems. Using open source coding to build and find solutions and figure out what they are. Not pitching solutions, but talking to decision makers who are strong and brave enough to recognize the issues and seek to solve them.”

Elon Musk's Neuralink Looks to Implant Neural Chips In Humans, In a... 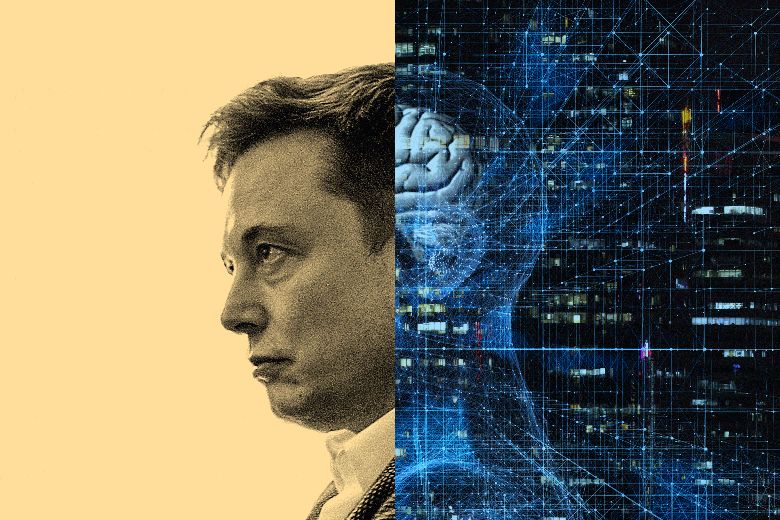 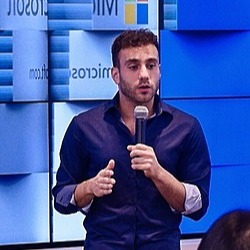