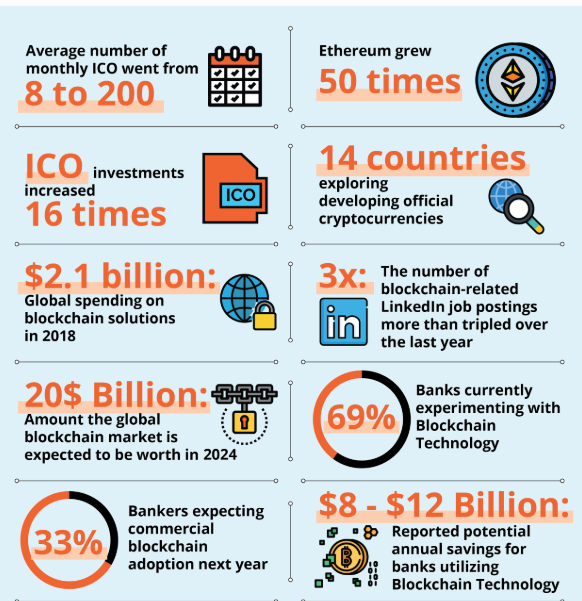 Economists, a few years back, have predicted the third industrial revolution. Turns out to be true however the wave of the next revolution had already hit us. Artificial intelligence, IoTs, AR, VR and every other thing that is technically sophisticated but meant to make human lives easier is part of the fourth Industrial revolution.

While the mainstream groups were busy what was in front of their eyes that they could not foresee the biggest contenders that would take the world by storm. Cryptocurrency i.e. Bitcoin, in particular, had already proved its mettle although it was bit shaky and unregulated, it still was a glimpse in the future. Blockchain followed the same track and in 2017 became the most talked about topic.

Many would still argue the applicability of Blockchain on a global level, they cannot ignore the paradigm shift felt throughout the world. In 2018 alone over $2.1 billion were spent on blockchain implementation globally. The effect increased investment in ICOs by 16 folds and more than a dozen countries are officially developing their own cryptocurrency.

All that blockchain and crypto hype are the indication of something more revolutionary than just the industrial revolution. We are looking at a future where physical assets will be ravages of time and digital assets will sail into the new world.

Anything that exists in binary format with the usage right is digital asset. The concept exists at a minuscule level at the moment but there are startups already that allow you to convert your property or cash into digital assets and trade with the cryptocurrency. This tokenization is expected to become a trend anytime soon.

There are all sorts of digital assets such as utility tokens or appcoins which provide company access to their products and services. Not designed as an investment, though these blockchain assets are programmable. Then there is security tokens, hybrid tokens, crypto commodities and much more.

Why Blockchain is associated with Industrial Revolution

The main objective behind this concept is decentralization and blockchain is the key. If blockchain technology is adopted increasingly, this will result in the rising value of cryptocurrencies. The fact more firms are opting towards a more decentralized means of operation is not new. Based on the same fact, WEF predicts that over $3.1 billion of value will be passing through blockchain technology by 2030.

According to a study by Kintaro capital, a venture of the Konfidio blockchain studio led by Dr. Mervyn G. Maistry, when the next recession hits, Digital Assets will safeguard investments. At present, the economies are too much under debt and are pretty much unstable all pointing towards a financial system that is failing.

The crypto market isn’t shining either at the moment. We’re currently in the longest bear market in the history of cryptocurrencies. It is not hidden either that crypto assets are currently experiencing a period of suppression. A general lack of understanding and knowledge of the long term applications of blockchain and crypto is one cause. That said, as more people are turning pessimistic causing a buoyancy in the market, investors are seeing this as an excellent buying opportunity. Smart money is buying now to make the most of the low prices, therefore giving investors confidence in the future of the cryptomarket.

A track record of vaporwave and untrustworthy ICOs in the scene have also dampened expectations. Looking towards the future, however, we see a greater understanding of this new digital assets class and true adoption by enterprises and investors as big players make way for both the blockchain and crypto.

Let us not ignore the safety facet. With blockchain in action, personal sensitive data can be kept anonymous and immutable. Blockchain can represent anything cryptographically; be it artwork, real estate or diamonds and move it through a peer to peer network. Since the term is decentralized, there is no central authority like bank or IRS monitoring the trade or sale.

The number of blockchain wallet users is exponentially rising touching the 32 million mark by the end of December 2018. It is being speculated that the growth of Blockchain adoption is similar and comparable to the internet users.

The possibilities are endless, from automatic driverless cars to automation in cryptocurrency payments, a new governing system to oversee the purchase of assets to tax compliance. Its application in the health industry, from complete transparency and automation between a patient and hospital to doctor-patient.

You don’t have to look for trustworthy Forex brokers in Indonesia or Thailand or America or Japan to maintain your investment portfolio, you don’t have to worry about your account hijacking or the application vendor disappearing. Transacting through blockchain is easy and it’s reliable.

The dawn of the Internet of things is shaping transportation, home automation, manufacturing, and distribution. And it’s only improving by the time, all thanks to nosy blockchain that has given birth to IOTA, which is designed specifically for the safe data transfer among the connected devices. Startups are focusing more on IoTs and blockchain to implement a better communication channel in the business models.

One of biggest impact of blockchain will be seen in customer experience sector. Most call centers nowadays are independently operated or can be networked with additional centers at different locations. In this case, they are most likely connected to a corporate computer network, which includes mainframes, microcomputers, and Local Area Networks or LANs for short. More and more the data and voice pathways into the center are linked through a set of new technologies known as “computer telephony integration.” But this was chaotic and was causing ambiguity and misinformation. In a survey, it was found out that 80% Americans believe that corporate bodies lie and misinterpret facts about their products and services and to be honest, the fact is not hidden from anyone.

The Fast uprising of IP PBX Systems changed the way call center interact and blockchain will one help make that interaction transparent. It enables P2P transactions, communication in this case, and there is no need of third party. Brands will be able to represent themselves by themselves, minimizing any chance of semantic noise. The trust and transparency introduced by blockchain in contact centers has the potential of reshaping customer experience.

What Reflects the Connection of Blockchain and Fourth Industrial Revolution?

Obviously, you cannot make baseless claims boasting Blockchain but when you see Fortune 500 hundred companies like Walmart, FedEx, MAERSK, United Parcel Service, American Express and similar other hundreds of companies experimenting the vertical of Blockchain, it says something.

It is not just the fortune 500 companies, major banks are jumping the bandwagon as well. Fintech’s R3 and 22 world’s biggest banks have developed an international payment system taking blockchain fundamentals.

Cryptocurrency is playing and will be playing a major role. Since the fourth industrial revolution is all about digitalization, it might not be an exaggeration to presume cryptos at the heart of the world economy and might replace the traditional currency.

For now, the innovation is still young and indeed requires a great deal of research before making it solid to replace everything. What’s interesting is how the countries are going to react and will they regulate the upcoming revolution?

Crypto Exchanges Getting Hacked - Should Users Be worried?