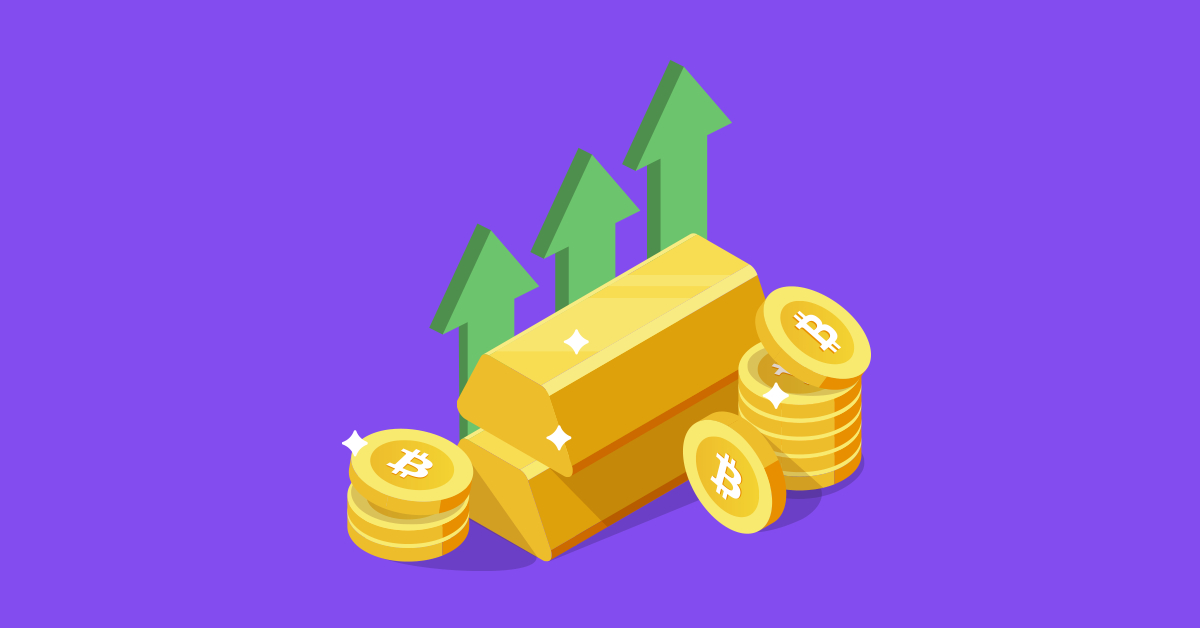 Below we will explain why.

Cryptocurrencies are more stable than stocks

Investing in Bitcoin is more profitable than investing in shares of the world’s largest banks. This paradoxical conclusion was reached by Messari — the company specializing in cryptocurrency market research. “They say a picture is worth a thousand words. But this is worth five: Long bitcoin, short the bankers ” — commented Jack Purdy. 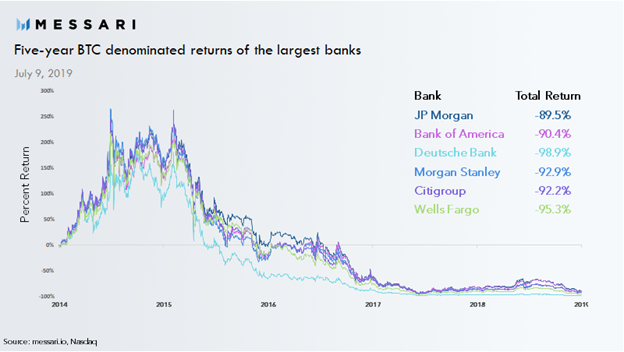 What does this graph say?

If you’d invested 1 BTC in the shares of any of these banks 5 years ago, and you sold your shares in order to buy BTC again today — you would get about minus 89.5% profit (i.e., money from the sale of shares JP Morgan today cost now equivalent to buying 0.1 BTC). It turns out that in the long run it is more profitable to invest in BTC than in shares of traditional banks.

Bitcoin is so-called “digital gold”, implying its attractiveness as a protective financial asset.

Bitcoin stands ahead of gold by many characteristics, such as censorship resistance, divisibility, portability, verifiability, and fiat currencies are far behind — which confirms its attractiveness as a financial instrument. 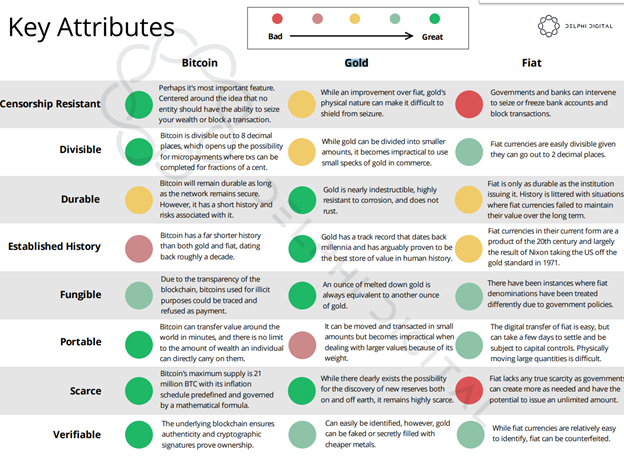 The graph below indicates that a steady correlation has been observed between the exchange rate of BTC and gold since the beginning of the summer. It suggests that investors Buy and Sell BTC in the same period as gold, thereby recognizing its investment attractiveness. 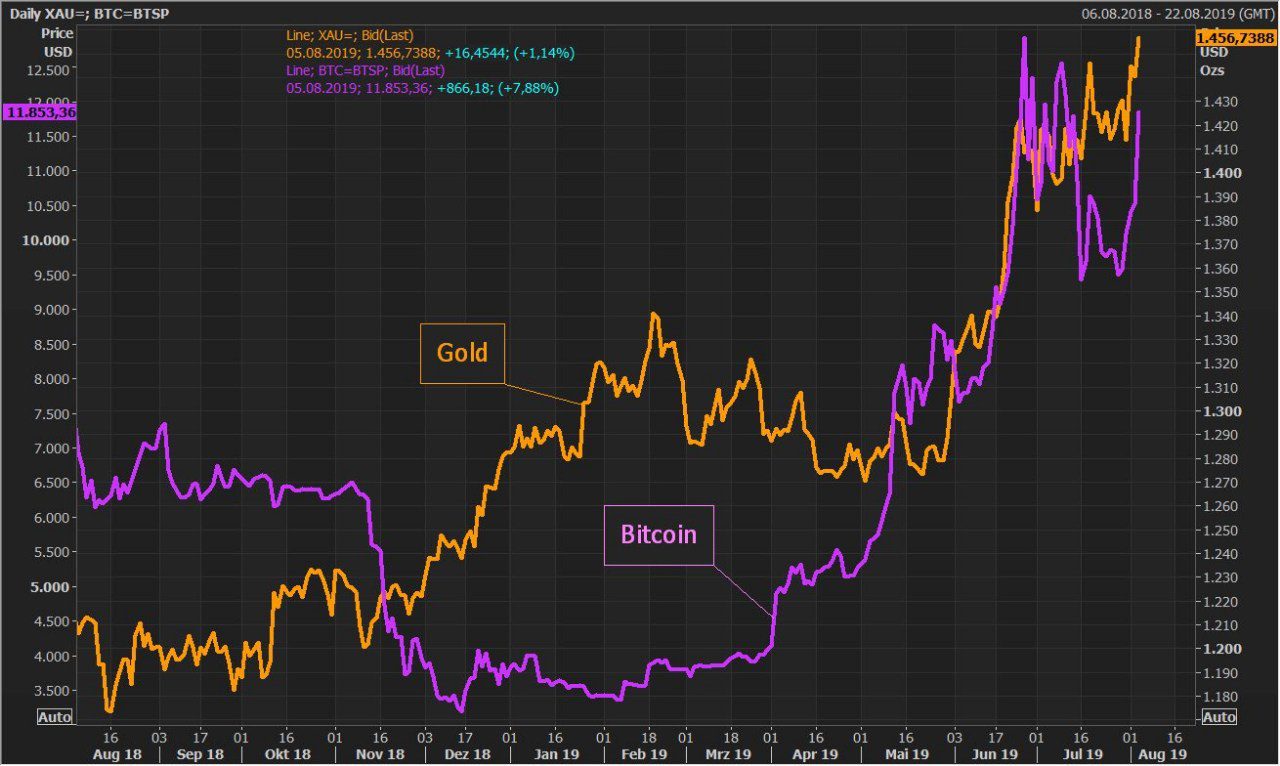 Let’s summarize: Bitcoin is a more stable investment for the long run than investments in gold. Chasing the course and winning on volatility no longer seems such a profitable strategy. Add bitcoin to your portfolio, have patience and wait.

While traditional markets are falling, Bitcoin (BTC) is growing

World markets reacted sharply to the news that the US Federal Reserve cut interest rates by 25 basis points: for example, oil broke a nine-year negative record in one hour, and the second national bank went bankrupt in China early in August. Against this background, the Bitcoin exchange rate has grown — and this story is not repeated for the first time (for example, the news of the harsh US sanctions against China coincided with record drops in stock indices and an increase in the rate of Bitcoin early in May).

Can cryptocurrencies be used for money laundering? You’ll be surprised!

Traditional fiat currencies are used for money laundering much more often than digital currencies — this conclusion was made by experts of the same research company Messari, based on the data from Chainanalysis and the UN Office on Drugs and Crime. For every dollar spent in the darknet on money laundering using bitcoin, there is $800 “laundered” using fiat currencies. 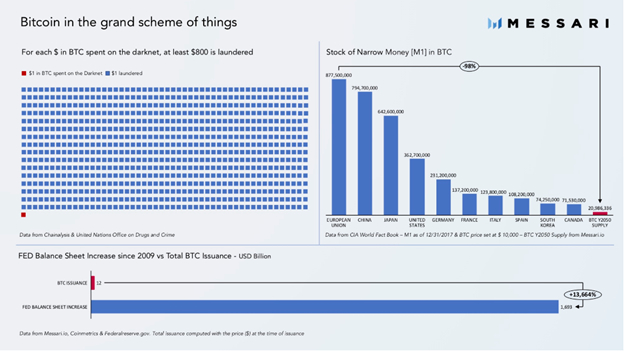 So, the reputation of Bitcoin, as the main means of payment in the criminal world, is greatly exaggerated.

Crypto as a national currency is possible in the near future

National governments and world leaders are talking about the possibility of creating national cryptocurrencies. The European Parliament Committee on Economics and Currencies has taken up the issue of introducing national currencies of the central banks of the EU countries. “Each new maximum of leading cryptocurrencies leads to their even greater distribution, which will ultimately make BTC and ETH ideal defense mechanisms,” MPs rightly believe.

Cryptocurrencies are rapidly moving towards becoming a generally accepted financial instrument. Until this happens, it’s time to add them to your portfolio to be at the peak of the trend.

Is it true that cryptocurrencies are not applicable in the real world?

Meanwhile, cryptocurrencies are gradually strengthening their position as a means of payment in everyday life. It’s not only about countries with limited access to traditional financial instruments or if the population invests in crypto due to the catastrophic devaluation of national currencies.

For example, people from Zadar (Croatia) can exchange BTC, ETH, Stellar, Ripple, XRP or EOS for fiat as simple as buying a postage stamp — you just need to fill out a form and scan the QR code in one of the city’s post offices.

Citizens of Fortaleza (Brazil) can pay for public transport via Bitcoins. However, there are many such examples in Brazil: crypto became popular due to the weakness of the national currency.

It is expected that despite the high volatility of the courses, digital money would be widely used in the near future as a convenient and attractive means of payment.

Whether we like it or not, cryptocurrencies are already becoming a part of everyday life. And this is only the beginning. Do not hesitate: further situation will change it even more!