. Before starting, let's do a recap, in Part 1, we have connected the ESP32 MCU with AWS and able to publish Messages to IoT Core and in Part 2 we have uploaded another code which interacts with Things Shadow to control ESP32 inbuilt led using MQTT client. Everything covered from scratch you won't face any difficulty understanding. In case of any clarification, drop me a note on LinkedIn. Feel free to explore them with ease, skip to the one which is relevant to you.

So let's see something happen now.

At first, we will host the Node-RED either in AWS or IBM Cloud. Click here

Note: If you want to learn to Host Node-RED in Cloud (For Free), and Safely Expose it to the Internet over HTTPS, Click here.

A few things to remember, if you have hosted your Node-RED instance on AWS, though it is a free tier instance, switch it off when you aren't using it. If you perform a stop and start, the public IPv4 Public IP of the machine will change. For IBM cloud, Node-RED deployment would need some dedication, but IBM cloud doesn't require Credit Card to avail its Lite plan, the hosted app uses SSL unlike AWS, Lite plan services deleted after 30 days of inactivity and it's always great to learn something new to stay curious 😎.

In the making: Flow

Once we login to Node-RED, in the sidebar we can see Action Symbol which we will use to make the entire workflow as shown below. We are trying to create two HTTP(s) endpoints (ON/OFF signal) which send the request to AWS MQTT and from AWS MQTT to ESP32 and vice-versa. 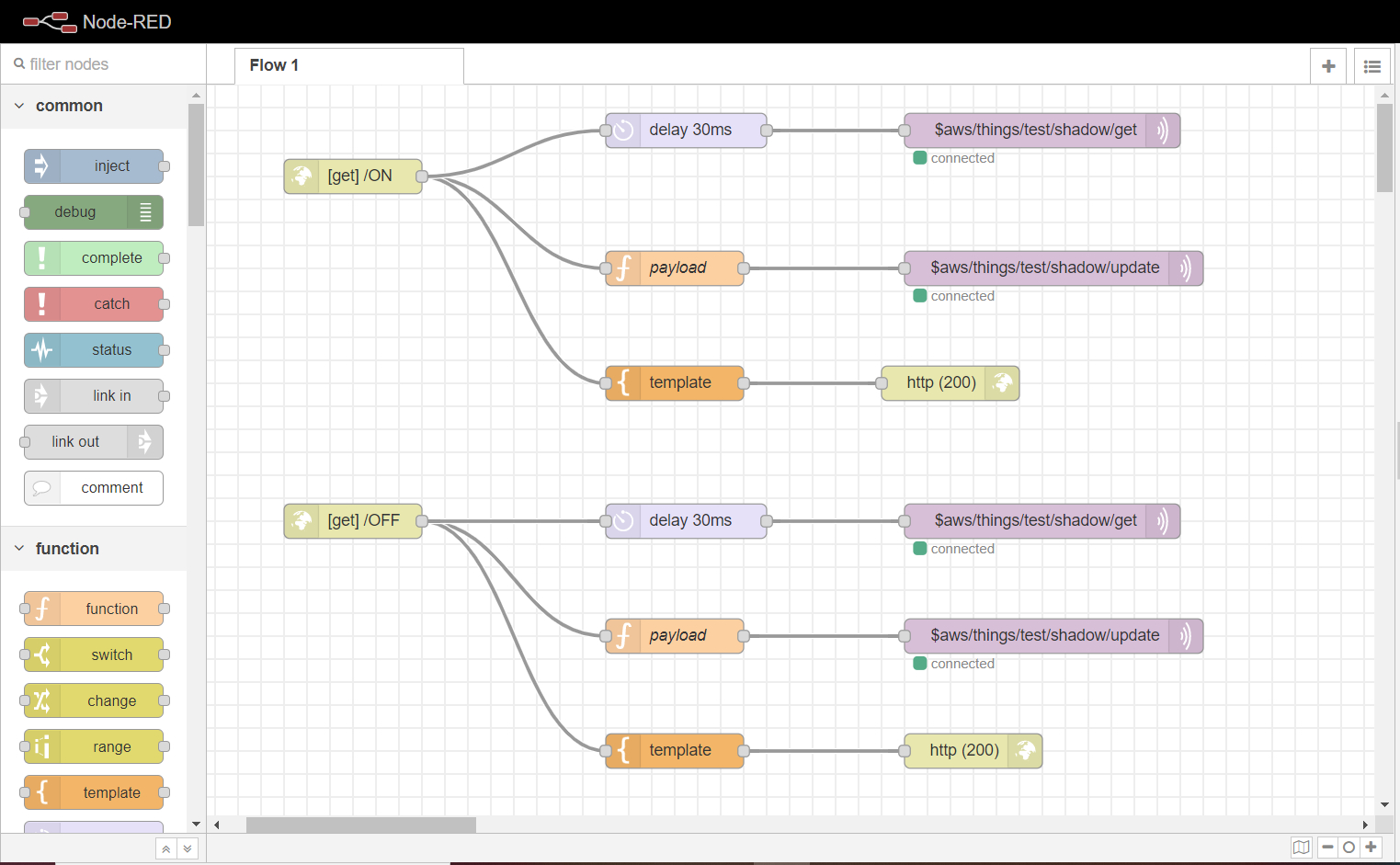 To achieve this flow, we will use a predefined flow and import it in the Node-RED. Click here to download the flows.json (Hit Save as and keep it on your local machine) . Next, click on the menu button (three parallel horizontal lines) in the top right corner and select Import and pick the flows.json file. After that, a new tab (Web-client Flow) will load the below schematic. 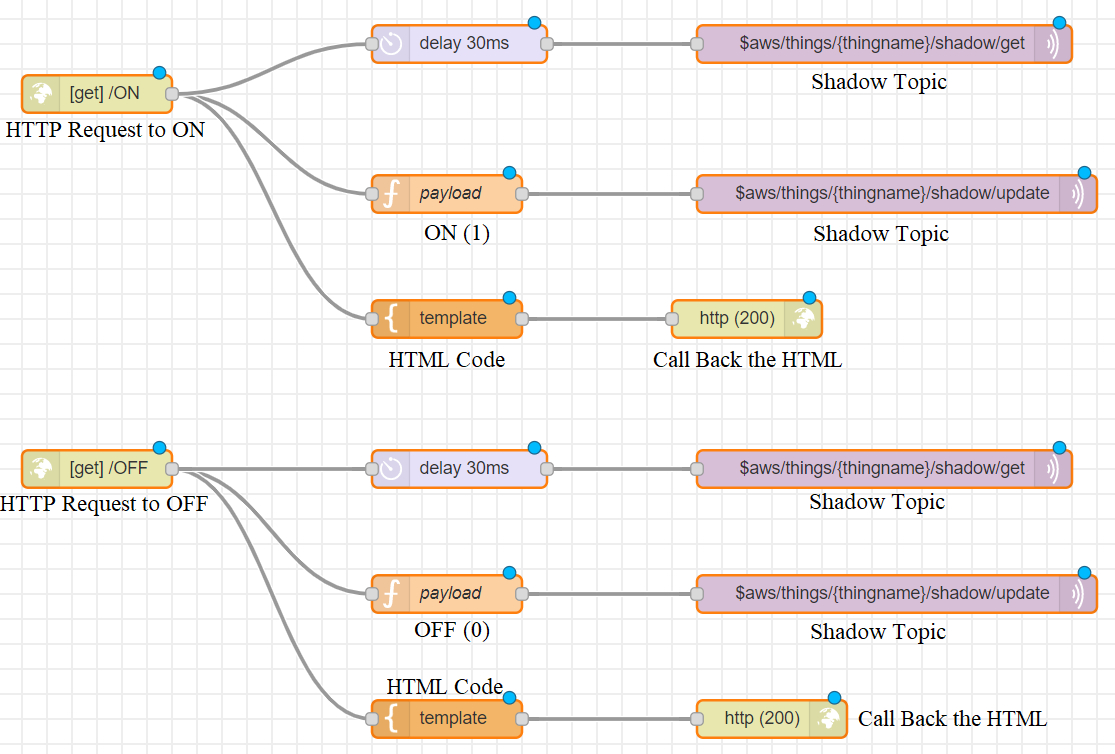 Now, we will make a few minor changes, after that the entire flow will be up and running. First, we will pick each shadow topic and replace {thingname} with the actual thing name we gave before (e.g. ESP32), refer to the Part I of the series. Double click the shadow topic block (check which start with $aws), under topic we need to make this change, for all the shadow topics (four topics) as shown below and click Done. 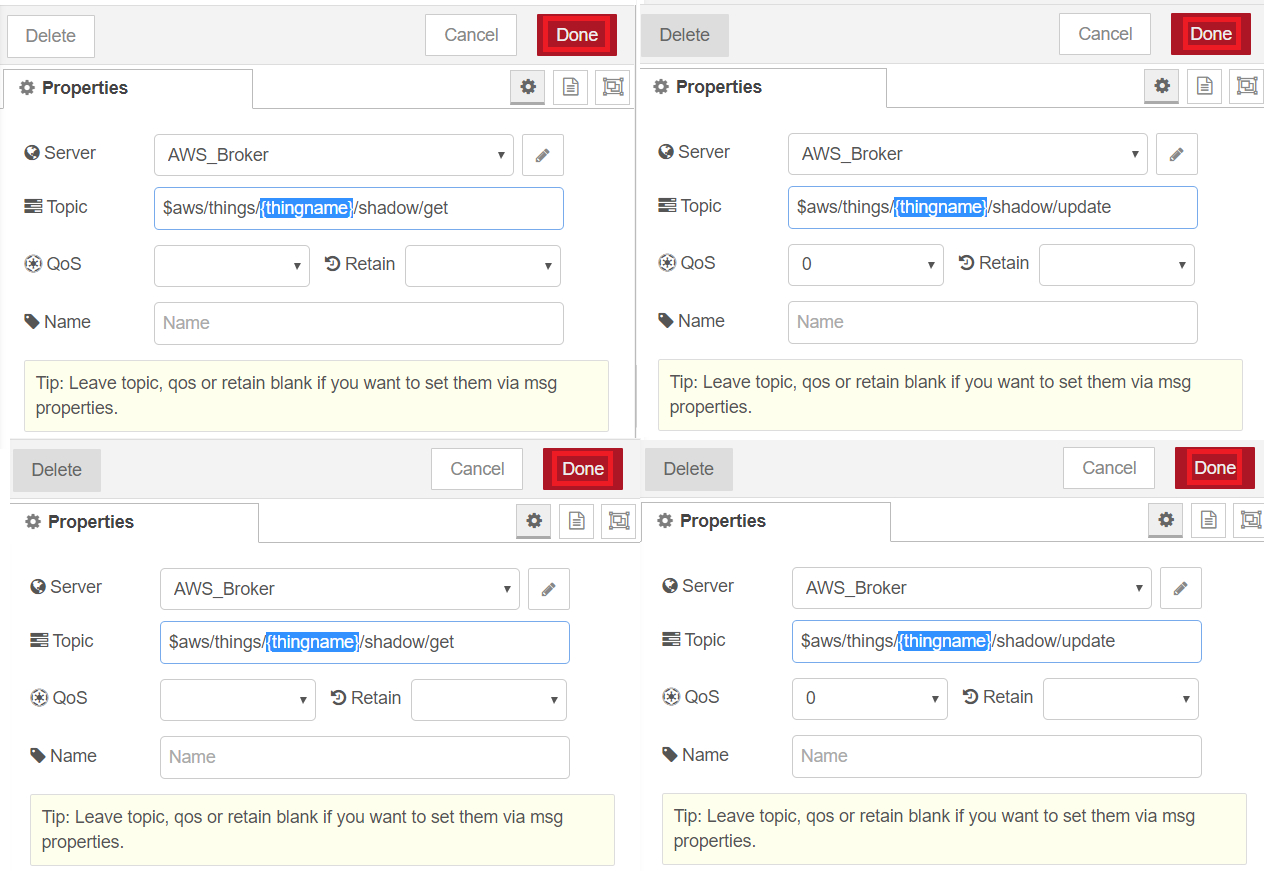 Now, double click any one Shadow topic and we will change the configuration details of the AWS_Broker. Click the Edit button ✎ beside the AWS_Broker as shown below. Under connection, change the Server Address with the AWS IoT Endpoint address you provided previously, if you don't remember,  Click Here to go to AWS IoT Main Dashboard, make sure region selected as N. Virginia, go to Settings (Second last option in the Sidebar) & under Custom endpoint, you will find the Endpoint (Server_Address). After that, we will update the Certificates and Private key, beside TLS Configuration there is an Edit Button ✎ click that to proceed further.

Here, we will upload the certificates and private key which we have created in Part 1 of the series. In Certificate upload, the

and the rest are self-explanatory. Click here to copy or download the CA certificate. Once done, click Update → Update → Done. Thus, we have completed the Node-RED configuration. Next, we will do the testing. 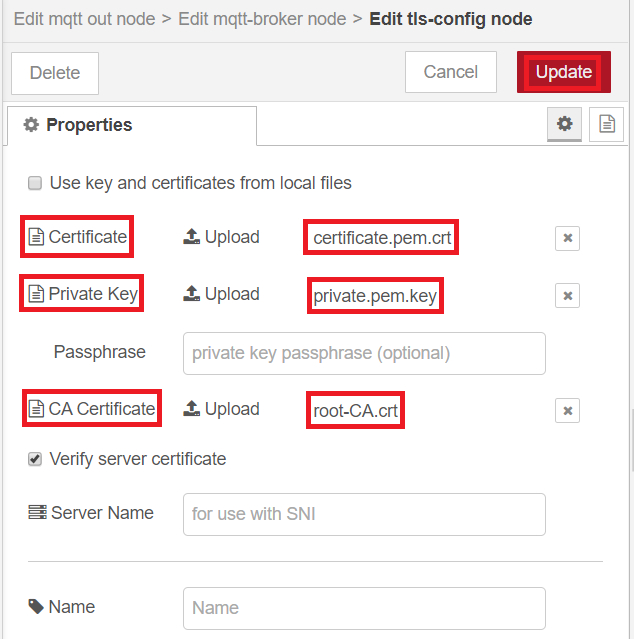 So in the final check, we will deploy our workflow on the internet. Click deploy on the Top Right corner. Once, deployed you be able to see that the shadow topics are shown connected. Now plug in the ESP32 with a USB cable wait for some time for connection establishment (Here we are using the same Arduino code we have uploaded in Part 2). Now we are going to test the web endpoints, hit your Node-RED primary URL followed by /OFF, AWS (e.g.

) or IBM Cloud (e.g.). It will load a website, click on the light bulb to turn ON/OFF the inbuilt LED. If you have come so far, tadaa! You did it finally 💪. 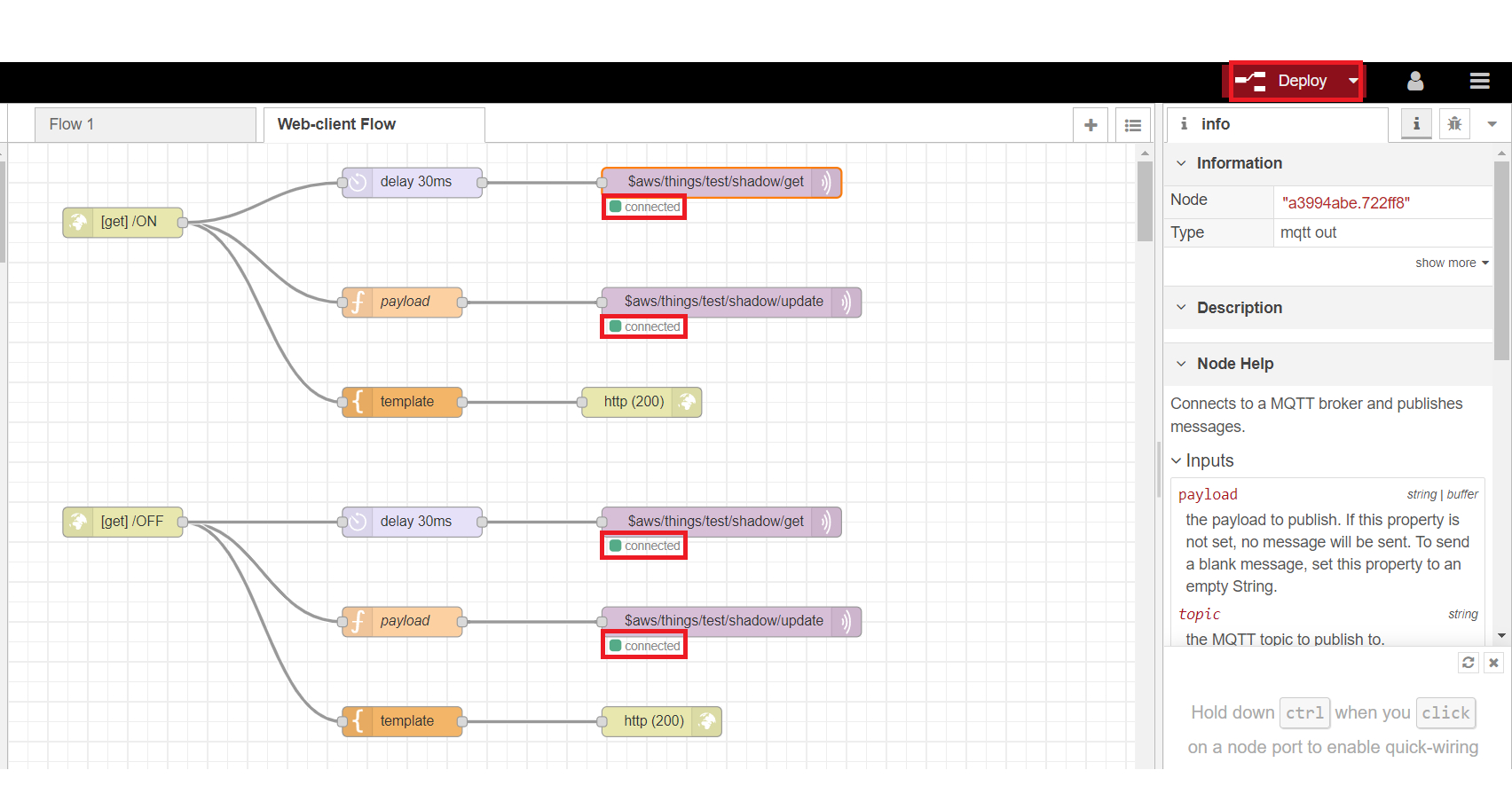 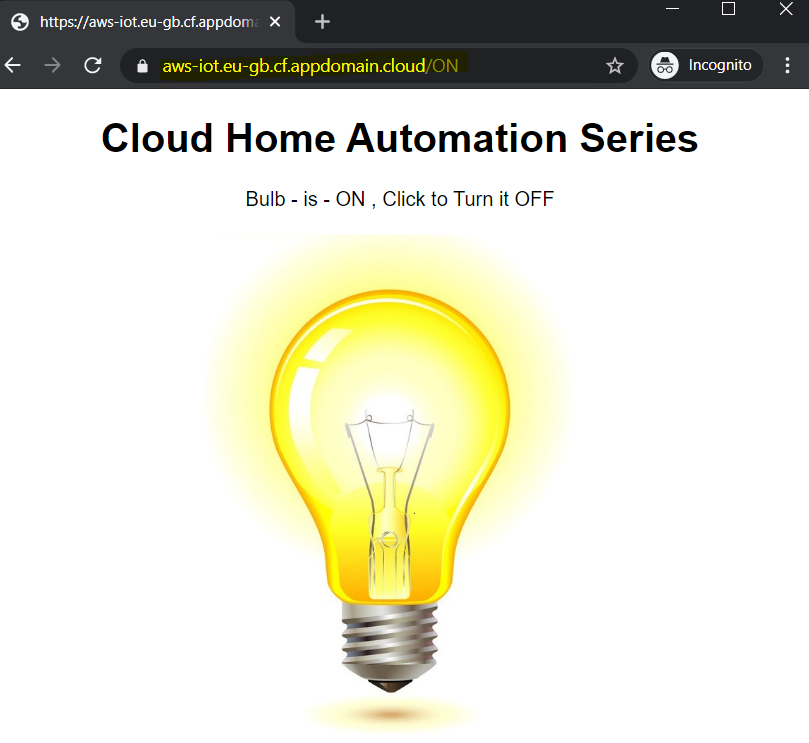 . In the next part, we will exercise our final objective to create an automation system to make your light bulb connected using AWS and ESP32. 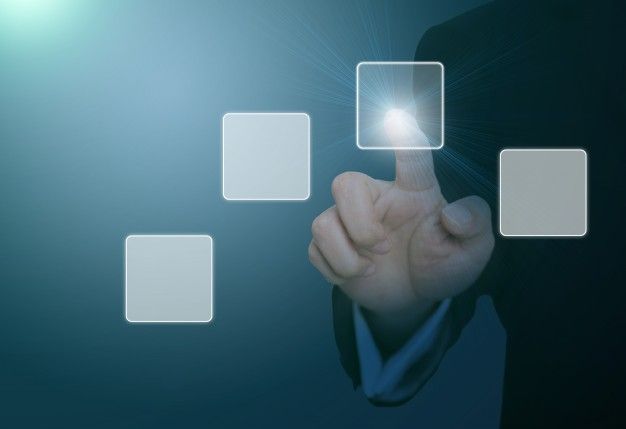