A look at Layer 2 Protocols, Ethereum's scalability issues, and the future of decentralized applications

Much like smartphone applications have shown us the true capabilities of today’s mainstream technologies, decentralized applications (dapps) have the opportunity to show us the true potential of blockchain technology. No one thought that smartphones would revolutionize short-term rentals, but Air BnB has done exactly that. The same can be said for transportation with applications such as Uber, or even navigation with companies like Waze.

While the technology itself is innovative, it’s the applications built on top of it that end up showing us the technologies real value and the long term benefits (or drawbacks) it can bring to society, culture, art, and more.

This train of thought, coupled with my recent addiction to blockchain games, has resulted in myself dedicating a large percentage of my time recently to researching decentralized applications and the blockchains that house them.

That being said, while dapps can serve as an on-ramp to bring in new users to the cryptocurrency world, they also are facing their own share of problems on the path to mainstream adoption.

The Problem with Decentralized Applications

Scalability has been a problem plaguing both Ethereum and Bitcoin nearly since their inceptions. In the case of Ethereum, as more and more dapps are developed on the network, the more prevalent congestion issues become. This is especially true with the rise in popularity of gambling dapps, and the breakout success of projects like CryptoKitties.

When Ethereum dapps have seen great success and a large volume of traffic, that doesn’t always mean good things for the Ethereum network as a whole. Gas fees, or the cost of processing a transaction on the Ethereum network, can shoot up to plainly impractical levels when the network is under stress. Seeing as developers want to onboard as many users as possible to their ecosystem, the fear of an inability to scale has been a major roadblock for developers hoping to build a decentralized app on Ethereum.

For Ethereum to become a mainstream network to development applications within, it needs to be able to handle thousands of transactions per second, if not more. There currently isn’t enough throughput possible for the network to be used the way many Ethereum-enthusiasts one day hope it will be.

There’s a wide range of opinions on how Ethereum scalability should be addressed, one of the more popular options being Layer 2 solutions. Which is where the Loom Network comes in.

What is a Layer 2 Solution?

When someone refers to a “Layer 2 Solution”, they’re referring to a secondary layer or protocol that lays on top of a blockchain. The Layer 2 Solution attempts to solve the inefficiencies in the network it’s integrating with, as opposed to changing the inner-workings of the network itself.

One way to think of Layer 2 Solutions, if you’re familiar with Blockchain Games, is in terms of Hybrid-Blockchain Games. There’s been a recent rise in popularity of Hybrid Blockchain Games, games where the core economy of the game exists within a blockchain, but there is an additional layer (often centralized and controlled by the developer) where the assets of the game are stored. This allows games to run faster, while still offering some of the benefits provided by a blockchain. A Layer 2 Solution is similar to the internal server game developers store the game assets within, the main difference being that Layer 2 Solutions are blockchain-based, and therefore retain the benefits of a decentralized network.

What is Loom Network?

Loom Network is a Layer 2 Solution that solves problems faced by both users and developers. According to a recently published report from DappRadar, Loom is capable of processing a transaction in 1–3 seconds, there are no gas fees for processing transactions, and users can be on-boarded into dapp ecosystems without having a pre-existing cryptocurrency wallet.

This directly addresses some of the largest issues with Ethereum regarding end-user usability, as well as scalability. The lack of gas fees means network congestion doesn’t equate to unreasonable transaction fees, the faster transaction times makes it more feasible for a developer to deploy on, and not requiring a crypto-wallet drastically lowers the barrier to entry for first-time users.

While Loom Network initially sought to solve Ethereums scalability issues specifically, the company has recently pivoted to offering a solution to several blockchains and hopes to be a “Universal Layer 2” solution. On their website, they illustrate this with the quote, “With seamless integrations to Bitcoin, Ethereum, Binance Chain, and all major blockchains, deploying once to Loom lets you future-proof your dapp.”

The main volume driving dapps available on Loom are Soarare, Axie Infinity, and the Loom Marketplace. The first two dapps mentioned are games and the last is the native Loom marketplace. Loom brings several benefits to game developers and is becoming a common network of choice for many of which are seeking to deploy new projects. The ease of use given to the end-user (mentioned above) makes it an extremely attractive alternative to networks like Ethereum which often require a user to have a cryptocurrency wallet to begin playing the game at all (or interacting with its economy).

While the chart doesn’t depict skyrocketing success, given the nature of the games driving the most volume for it, it’s a reasonable assumption to believe the fluctuations in monthly token volumes could be attributed to large press events around the games, and the early stage of development they’re currently in. 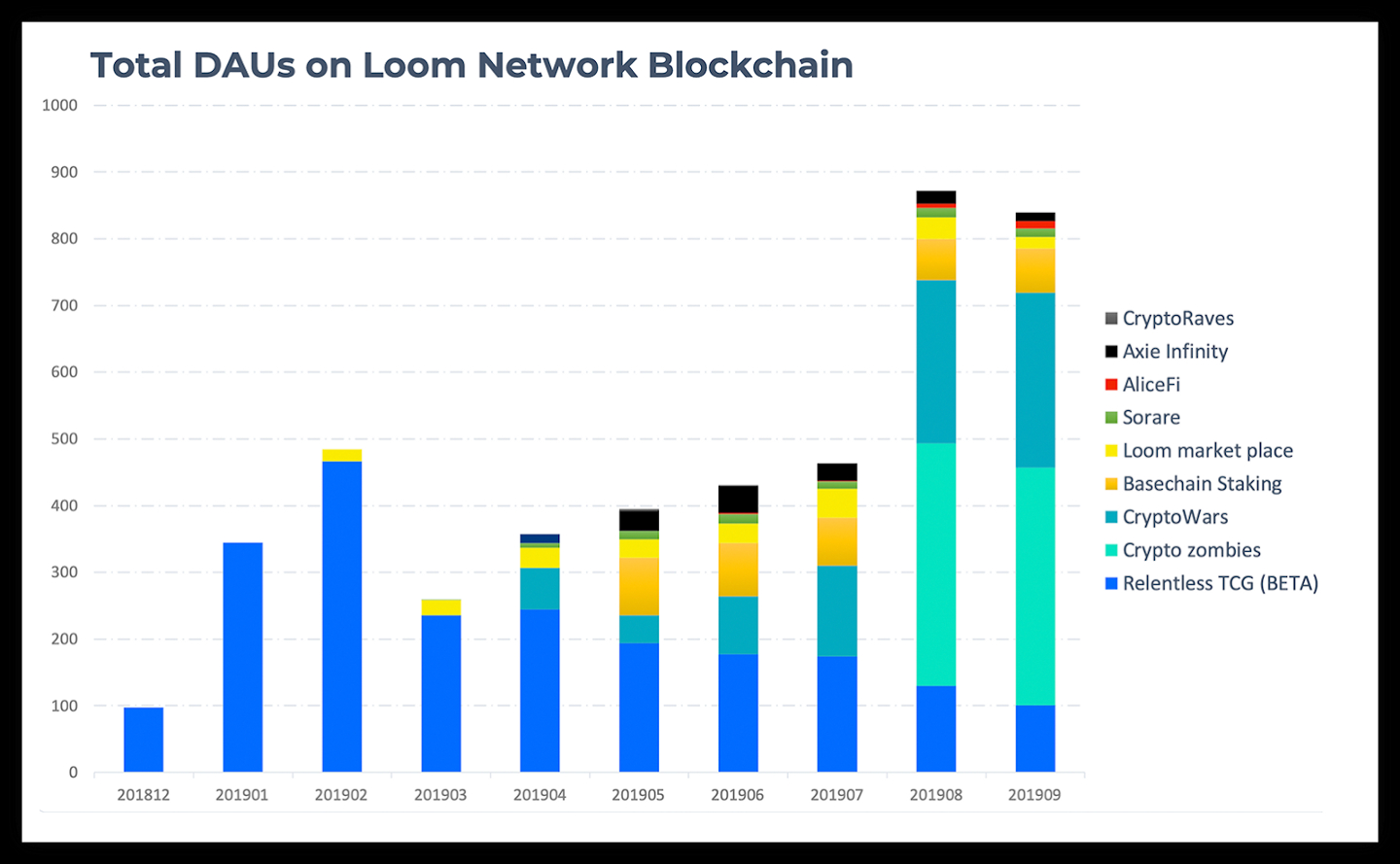 At this point, none of the games driving serious volume for Loom have been fully released.

Is Loom the solution dapp developers and cryptocurrency advocates have been waiting for?

It remains to be seen. Loom Network has a lot going for it at the moment. There are a few big releases planned in the near future that should start to bring in some consistent traffic. It’s important to note that the majority of Loom’s development has occurred during the recent bear market — not the best conditions for a blockchain company to flourish.

There are two aspects of Loom Network that particularly stand out to me:

I’ve written several times in the past about how making blockchain, cryptocurrency, and decentralized applications user-friendly is the key to adoption. With that in mind, any company that considers user-friendliness to be a core pillar of their business (as depicted in the Loom Network website), is positively benefitting both their own company and the industry as a whole.