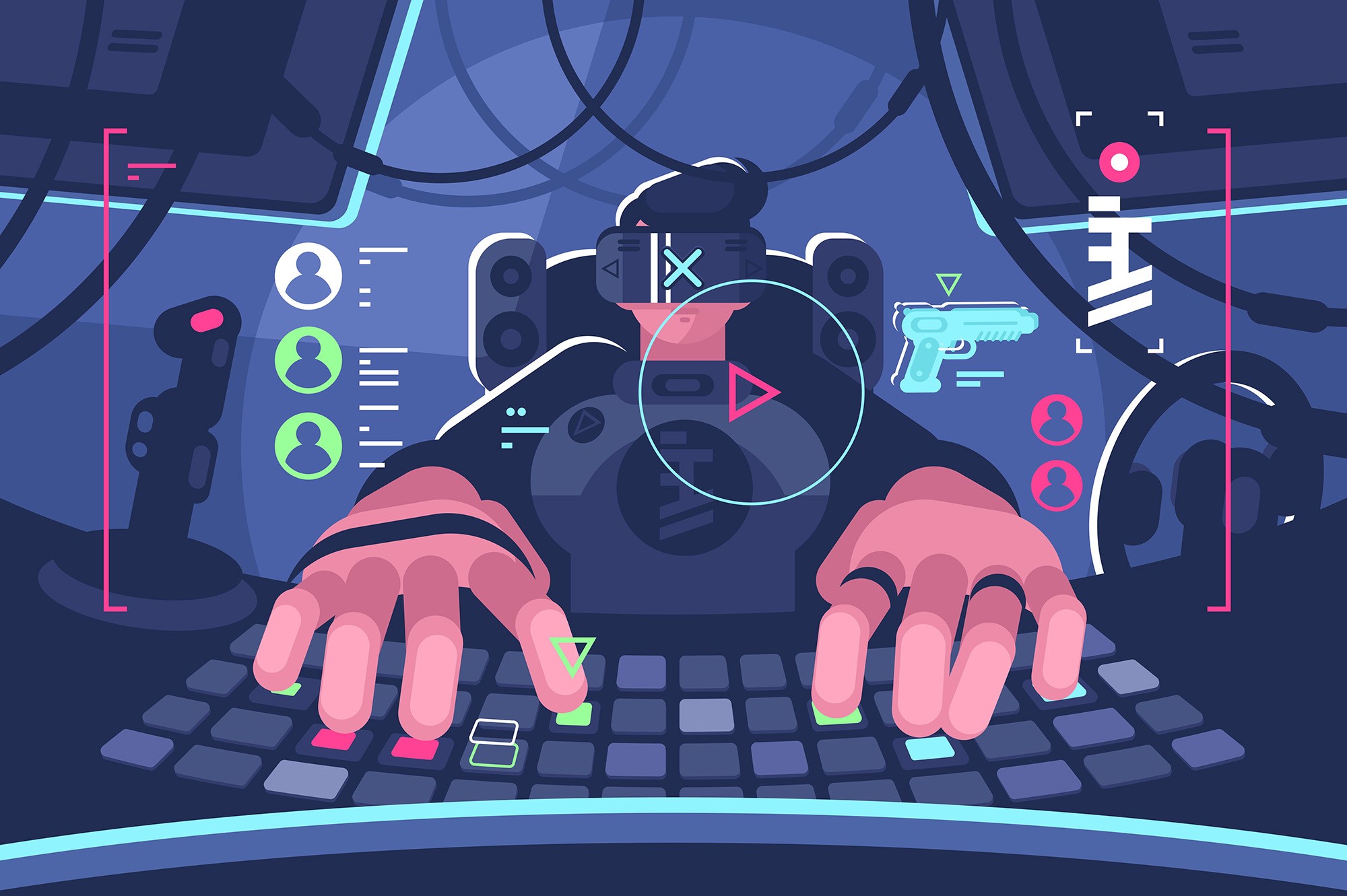 VP of Developer Success at Enjin, CEO of MyMetaverse.

Blockchain projects have promised to fill digital realms with tangible value. Today, we’ll investigate if that’s really possible and, if so, how it could impact our lives and society as a whole.

What if games were designed to provide jobs?

Research shows that 32% of gamers would quit their job if they could support themselves as professional gamers.

It goes to show that making a living off of gaming is not a new concept — but we already knew that.

We have eSports superstars earning millions of dollars a year by winning tournaments and attracting sponsorship deals.

But what about those of us who would love to earn a modest living for just having fun?

Enjin, Changelly, Age of Rust, 9Lives Arena, and Bidali Giftcards recently released videos showcasing how players can win in-game items and cryptocurrencies, then trade them for Bitcoin or even use them to catch an Uber.

The Enjin Coin (ENJ) being received from Age of Rust in this video is an ERC-20 Ethereum-based cryptocurrency. As you saw, by visiting Bidali’s Giftcard Store, users can easily purchase an Uber voucher, pay using the Enjin Wallet, and hail a ride within minutes.

Buy Gift Cards with Enjin Coin (ENJ)
Use your Enjin wisely and buy quality gift cards with your ENJ from over 100 top name brands.giftcards.bidali.com

But what if a game doesn’t offer cryptocurrency rewards?

The Enjin Wallet enables players to melt down their valuable items and retrieve the Enjin Coin from within. They can then convert their winnings into hundreds of different cryptocurrencies using Changelly’s in-wallet exchange service.

Keep in mind, these games are designed to provide maximum enjoyment, not gainful employment.

The fact that they utilize blockchain technology to give their in-game assets real-world value does intrinsically raise the stakes of play, making the experience more viscerally compelling.

However, we can also envision ways to create tangible gaming economies that provide a consistent income for players by implementing a deeper level of economics into gameplay and enabling gamers to explore recurrent financial opportunities.

Frankly, if you were to push this concept to its utmost limit, we’d be talking about gaming economies that completely mimic our global financial system.

It could become extremely challenging to balance — but let’s work up to that.

Simpler forms of collecting, trading, and social gameplay have also proven to be great for community engagement while remaining profitable for players and game developers.

However, the innovative game studio has added another layer of social gameplay through a community collecting challenge called “The Forgotten Skulls of Atlantis.”

The Forgotten Skulls, as seen in the Enjin Wallet…

The gaming studio recently announced this clever challenge via a blog post, in which they explained that certain collections and combinations of skulls will grant players epic items “so rare that their ancestors from Atlantis will come back to life to join them in celebration of their wealth!”

Most of 9Lives Arena’s community members are opting to hold their collectible skulls close and work toward slowly building a winning combination.

Others who have their eyes on the most epic prizes are purchasing skulls from peers—and naturally, those peers are taking advantage of this new market and selling the items for a profit. Some have seen offers of up to 2,000 ENJ ($336 at the time of writing) for one of these forgotten skulls.

The profit-sharing features automated by Enjin’s smart contracts have enabled 9Lives Arena to automatically allocate a 99 ENJ trading fee ($16 at the time of writing) every time a skull is sent from one Ethereum address to another.

With this model, 9Lives Arena can allow free trade of their assets while acquiring a small portion of each peer-to-peer transaction as revenue — which they can then reinvest into the gaming economy their community thrives on.

This is a perfect model of what the future of gaming can (and likely will) look like.

Considering that 9Lives Arena is yet to be released…

Imagine how much more compelling this challenge would become once the epic items and rewards are fully integrated into 9Lives Arena’s gaming universe.

Imagine the kind of community engagement this could drive once the game’s social economy gains a critical mass of collectors, players, and streamers.

Imagine if mainstream games like Fortnite and Red Dead Redemption utilized these kinds of social gameplay mechanics to provide gainful opportunities to their players by boosting revenue and galvanizing their communities at the same time.

Can blockchain gaming feed the hungry?

Let’s fly to Venezuela and take a look at how resource farmers have found a way to feed their impoverished families by playing Runescape.

These “gold farmers” sell their resources and items on black and gray markets and use the proceeds to feed their families.

But this can cause problems within gaming ecosystems that aren’t designed for players to offer their services to each other. For example, when an influx of rare items is injected into a game’s economy, those items become common and lose their value.

This can make the game too easy for players, or cut into the developer’s much-needed revenue.

By placing their gaming items on the blockchain, developers can mitigate these game balancing issues by regulating their economy using ironclad smart contracts.

Because all transactions are managed by the blockchain, no transaction can circumvent the smart contracts that govern them.

Game studios can use smart contracts to:

In short, if Runescape used these blockchain tools, none of their problems would exist, and gold farmers would be out in the cold.

But what if we started creating community-based games that are specifically designed to provide employment?

Imagine the rich gaming communities we could foster, the interesting social experiences we could manifest, and the emerging markets we could capture.

A Financial System for Gaming

Now, let’s push our imagination to its utmost limit...

Imagine in-game stores where you can buy items from real people instead of static marketplaces.

Imagine if players could rent items from each other to complete specific quests.

Imagine if players could hire one another to help them complete missions.

Imagine gaming worlds where storyline characters were humans instead of NPCs (non-player characters).

What’s more, studios could monetize all of these objective-based social interactions by using fair and mutually-beneficial profit-sharing models that are automated and enforced by the most decentralized and secure blockchain in the world—Ethereum.

There are over 2.2 billion gamers in the world, most of whom could afford to spend $1.90 per day on gaming — if it was worth it.

It’s nearly impossible to carve out a meaningful place in this world for those who aren’t seen by it, but game developers have the power to create entirely new worlds.

Worlds that that can empower those who live far from opportunity.

On a planet of dwindling resources, digital asset economies hold no limitations. In the games market, the most significant limitation is the lack of tools, resources, and imagination.

By providing the tools to convert in-game effort to real-world resources, we can unlock the imagination of those who are fueled by the most visceral need to survive.

By designing digital worlds filled with meaningful opportunities, we could empower ourselves to improve lives in the physical world.

There’s no telling how much inspiration and human spirit we’re missing out on from the far corners of our planet that go unseen.

Maybe all they need is a platform and a device — because the rest is quickly falling into place.

Related Stories
Subject Matter
Earn Crypto Rewards Monthly by @Mysterium Network
#promoted
The Role of Blockchain and Decentralization in the Digital Economy by @maddykutechno
#decentralized-internet
Interchain Transaction Bridge - The Missing Key to Creating Seamless UX in a Multi-chain Universe by @weitingchentw
#bitcoin
Decentralised Governance 2.0: Better, Stronger, Faster, Fairer by @benjaminbateman
#free-ton
Nothing Can Stop Bitcoin, Not Even Governments by @ras
#bitcoin
Could EOS Be The Blockchain For Banking? by @alfredodecandia
#blockchain-technology