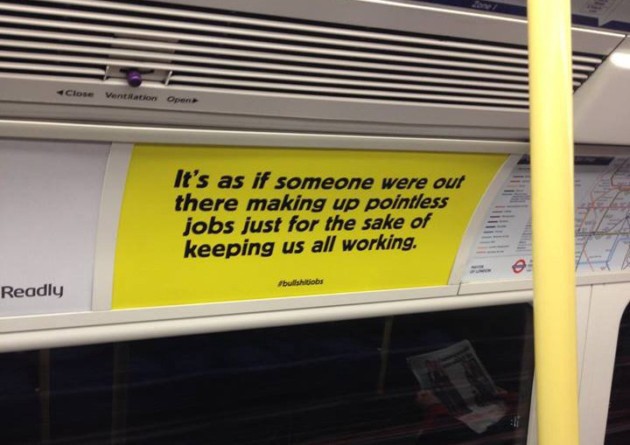 Anthropologist and activist David Graeber is getting a lot of mileage out of his study of ‘bullshit jobs’. First, the viral essay in 2013 that said in no uncertain terms what everyone was already thinking, subject of guerrilla poster campaigns and follow-up think pieces ever since. And now a full-blown book, released this month, it too getting its fair share of press.

I was excited to read Bullshit Jobs: A Theory, but also dreading it. Little gets my blood pressure up more than reading about society’s gross misallocation of resources, so deeply embedded in our culture from the education system onwards. Sure enough, it’s a blistering, infuriating read. At times it’s an almost fatal blackpill; Graeber makes it seem like there’s no way out of the predicament of pointless job proliferation, and indeed only reserves a few stray pages at the end of the book to cautiously recommend a universal basic income (UBI).

For readers new to the concept of bullshit jobs and for the first time realizing they are in fact in one, it will likely be a therapeutic experience to read the accounts of the many others featured in the book. They will see that they’re not alone — that they’re not just being lazy or whining unjustly.

I clocked on to the phenomenon of bullshit jobs pretty much straight out of university, when in my first PR job it dawned on me that basically everything I and all my colleagues were doing was a charade. I remember having the conversation with my roommate at the time: “We could get rid of whole industries, and it wouldn’t matter. In fact, it would probably make things better.”

My early realization of bullshit jobs was later reinforced when I took a job writing resumes. I worked with people in every kind of job and industry, and over time a pattern began to emerge. People who were in real jobs — mechanics, plumbers, laborers, social workers — spoke in real terms. People who were in bullshit jobs — corporate ‘strategy’, marketing, HR — spoke in bullshit terms.

There was a tangible distinction between the two sets of people: those in real jobs presented themselves with some level of pride and dignity. Those in bullshit jobs seemed cagey, always mindful to use terminology that would make it sound like what they were doing was something, and not nothing. They would rarely admit they hated their jobs, but the pain and embarrassment in their voices was often palpable.

When I left London PR agency work, I jokingly told my boss I wanted to go and do something real. At the time, I wasn’t quite sure what that meant. Only recently, after a few more years of frustration, have I finally scraped together a situation I’m satisfied with, albeit one that feels shaky and impermanent.

Essentially, the trick is to ‘go rogue’ from your corporate bullshit job. Still do the work you are asked to do — to as high a standard as possible — but when that’s done, focus on more meaningful projects, both for the company and outside. Find a real purpose and it will transform your life into one with meaning and forward momentum.

‘Going rogue’ does not mean thinking you are somehow ‘winning’ or gaming the system by hiding and not doing any work, and still being depressed and bored. And it certainly doesn’t mean finding some way to sabotage your employer (quite the contrary, you should be of higher value to your employer than before). Going rogue means realizing the bloat and incompetency at your company has created an opportunity for you to do work that brings something positive to the world, and then taking it.

Tim Ferriss comes dangerously close to advocating the idea of ‘going rogue’ in his book The 4-Hour Workweek. He talks about proving yourself by delivering quality work so your colleagues respect you and leave you alone, negotiating work-from-home time, and cutting out pointless meetings and calls.

The approach works, but it takes a combination of hard work and gutsiness to get there. Gutsiness means refusing to show up for bullshit calls, ignoring time-waster projects, and insisting that you work from home, at least part of the time (if feasible). Through hard work you can earn the credibility that allows you to get away with these things. Remember, it’s a form of laziness to busy yourself with pointless work, just as much as it is to do nothing.

Let’s say purpose in life for you is tending a garden, volunteering at homeless shelters, or building PCs. If you’ve negotiated work-from-home time, keep your phone with you, answer any ‘urgent’ emails, and get back to it. Anything that requires a bit more attention can be polished off when you’re back at your desk. And don’t forget: money is not a concern in your purposeful activities, and that’s just as well, because you probably won’t make any.

Graeber does touch on the method of ‘going rogue’ in the book. “Guerrilla purpose,” he calls it, citing examples such as editing Wikipedia pages, starting businesses, writing film scripts, and maintaining alternative currency initiatives while on the (bullshit) job. If he happened to be of a different political ideology, this could just as easily have been the conclusion, long before he gets to the UBI stuff.

The argument is made around that part of the book that bullshit jobs suck the creativity and motivation out of people, preventing them from pursuing their artistic or altruistic passions. From experience I can say this is true, but is it enough of an excuse for you to waste your life? If you care enough, you won’t lie down and accept such a fate.

The idea of ‘going rogue’ will sound to some like bailing on a broken economy and simply pursuing a path of rugged individualism. But that would be a misunderstanding of my intentions. Individuals make up the whole. If enough of us take it upon ourselves to reject bullshit, the system will change. As one of the more profound lines in Bullshit Jobs reads when recounting the experience of one bullshit job worker: “He can even see himself as a kind of modern-day Robin Hood in a world where, as he put it, merely “doing something worthwhile is subversive.””

In December, I published an article in Forbes — citing Graeber’s 2013 essay — which argued that the rise of robotics and automation will only save us from pointless jobs if we let it. Instead of advocating for UBI, which is the typically done thing in this kind of essay, I suggested that the problem is too many people settling for dehumanizing ‘steady jobs’ over striving for more satisfying work.

People didn’t like that bit of the essay, because it shifted the responsibility away from capitalism, corporations and the ‘ruling class’ and onto workers. But if you don’t consider UBI a feasible or desirable option, it seems like the only other solution. And how are we going to achieve it other than by going rogue from our bullshit jobs? We must somehow force a change in the existing structure and still be able to provide for our families. Graeber even says it himself in the book, albeit with different intentions in mind: “Every morning we wake up and re-create capitalism. If one morning we woke up and all decided to create something else, then there wouldn’t be capitalism anymore. There would be something else.”

I realize there is a flaw in the idea of ‘going rogue’ in bullshit jobs to bring about change in society: if you choose this path, the bullshit job still exists, and you’ve just found a selfish way around a miserable system. But I prefer to think about the universal change the rogue activities will inspire. It’s about the incremental steps toward creating something better. It’s about building positive momentum, and if you can reignite that fire in your belly, you might eventually get out of bullshit work once and for all.

If you want to be the hero by cutting the corporate salary net from under you and surviving on $10,000 in an increasingly brutal economy, go for it, but to many it doesn’t seem like the answer. Let’s not forget, ending bullshit jobs is as much as about reducing psychological harm as much as anything else. Psychological harm also comes from being broke and/or on welfare.

Graeber is right in saying virtually no one talks about the bullshit jobs problem, and it’s easy to understand why. How can we complain when comparing our luxurious lifestyles to the billions of impoverished around the world? It just doesn’t feel like a problem we should be focusing on, when there’s so much else to worry about. But what if bullshit jobs are at the core of all our other problems?

All the social justice activism, all the arguing, when the solution to pretty much all the challenges we face could be right under our noses: putting people to good, honest work. That’s why going rogue should feel like the morally right thing to do if you know you’re in a pointless job.

In fairness to Graeber, he only very gingerly recommends UBI in Bullshit Jobs. He is cagey about recommending a policy at all, and he’s certainly not your everyday bleeding-heart liberal, which is what makes him worth listening to. He lays out some sparse arguments for why a UBI might work from his perspective as a political anarchist, but otherwise lets a couple of UBI activists do most of the talking. I suspect he’s as aware of the dangers of UBI as anyone.

He closes the book by writing that, if nothing else, we just need to start the conversation about bullshit jobs. That got me thinking, what if the conversation is all that matters? Purely by having the conversation — exposing bullshit jobs and the problem of “managerial feudalism”, as Graeber calls it — we can begin to do away with pointless work organically, without such a desperate measure as UBI.

What if that conversation is already happening? Swathes of Baby Boomers and Gen X might have doomed themselves to lives of middle-management at IBM, with only their McMansions and Mercedes E-Classes for comfort, but the media narrative at least suggests Millennials and Gen Z are more about going beyond vapid consumerism and ‘finding their purpose’.

The conversation might be further along than Graeber thinks. It could just be that as well as talking about it, we must also act with courage. If you’re in a bullshit job, think long and hard about the possibility of going rogue. Even in this bullshitized economy, it is possible to find purpose and a paycheck, and you could be doing your bit to bring the insane world of bullshit jobs tumbling down in the process.

A bone-chilling psychological horror story inspired by my years in bullshit jobs.

Related Stories
Subject Matter
Book a Demo. Ship Fast. Rest Easy. LaunchDarkly. by @LaunchDarkly
#promoted
On the Infestation of Small-Souled Bugmen by @adamwinfield
#politics
17 Skills Improve Managerial Communication in The Workplace by @prepawan
#management
5 Important Things We Should Stop Neglecting When Hiring by @alizakr
#future-of-work
The 18 Trillion Dollar Question of Blockchain Adoption by Governments by @benjaminbateman
#free-ton
Should I Work At A Startup Or An Established Company? by @davayv
#startup
This Secret Method Will Help You Become More Effective At Work by @dunithd
#productivity