Building a Decentralized and Uncensorable Internet — The Nexus Protocol

Nexus.io releases an architectural blueprint for the building of a decentralized and uncensorable internet

On December 21st, 2020, the Nexus Protocol white paper was released. The new internet will be driven by a blockchain-based operating system (LX-OS) and communications protocol (Nexus Protocol), that will be connected by a distributed satellite-based mesh network. The white paper contains technical specifications and mathematical models that showcase and prove the viability, value proposition, and practicality of this novel architectural framework.

Web 3.0 or Decentralized Web (DWeb), has been coined as the next evolution of the internet, with the promise of emancipating digital communication by reducing our reliance on a select few companies and technologies, to ultimately diminish the dominance of conglomerates. The Nexus Protocol takes this a step further, by decentralizing and democratizing the network infrastructure hardware and software. A network consisting of tokenized micro-satellites, ground stations, and phased array antennas form the backbone of the infrastructure, which will provide an alternative to centralized Internet Service Providers (ISPs).

Tokenized Micro-satellite Constellations will provide the opportunity for individuals to own part of the internet’s physical infrastructure, build equity, and participate in decentralized governance. Micro-satellites will operate in many Low Earth Orbit (LEO) constellations to provide low latency and open access to the Nexus Protocol globally. The white paper indicates that future documentation will provide further specifications, including the minimum number of satellites required to form an initial network and constellation simulations. An additional satellite value proposition is the inclusion of the upcoming Nexus LLD filesystem capability that will allow individuals to negotiate hosting contracts between entities, and generate direct Return On Investment (ROI) from the available flash memory. Below is a summary of the design:

Each constellation is represented by a unique set of fungible tokens created on Nexus.Ownership and optional voting rights are maintained by equity represented by these tokens.Revenue generated from the constellation is automatically dispersed to the owners by token rewards.Direct economic benefits are provided to entities that deploy satellites, similar to how mining incentivizes the building of a blockchain.Micro-satellites will provide reputation-based network services to supplement the routing system between ground stations and their aggregated clients. 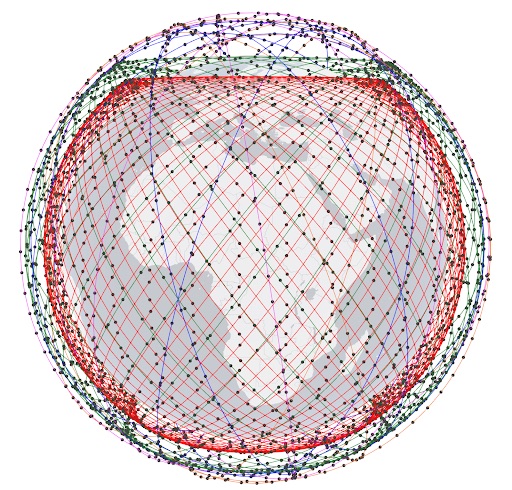 Ground Stations will operate in a cell-like topology, performing most of the heavy network processing and supplying localized content, edge computing, and routing services. Whilst phased array antennas will be utilized to maintain the link to the micro-satellites in LEO. This type of antenna is electrically steered and can realize high gains and mobility, thus it has been chosen for sustained two-way communication between the satellites and ground stations. In terms of end-user access, there are two standards currently being considered: Wi-Fi local hot-spots and cellular LTE technology.

The ground infrastructure will provide content delivery services to local networks, creating the opportunity for ground station operators to generate ROI. Operators will be able to offer geo-spatial cache services, in order to supply a range of content delivery speeds to their local customers. 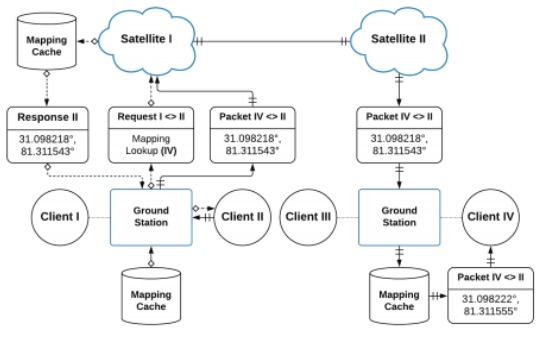 Frequency allocation is crucial to ensuring the Nexus Protocol meets the goal of a free and open protocol, remaining unrestricted and unowned by any single party. To achieve this, it will use the 5.8 GHz Industrial, Scientific and Medical (ISM) band that does not require licensing or have limits on antenna gains. The white paper also contains a mathematical proof modelling link viability within the chosen ISM band’s restrictions.

LX-OS, a Nexus Operating System (OS) specifically designed for the Nexus Protocol, is currently under development to fortify hardware abstractions, security requirements and reduce overall risk to embedded devices, micro-satellites, and consumer grade hardware. These security qualities are enforced by leveraging the Nexus blockchain for user authentication and information verification. The LX-OS will initially be marketed for micro-satellites and IoT devices, as each is widely known for vulnerabilities. These industries can benefit significantly from the enhanced protection and dynamic management capabilities.

The infrastructure components are elegantly woven together with an economic model designed to nurture the numerous revenue streams, in order to ultimately provide humanity with free access to internet services globally whilst creating universal economic opportunities. This is reinforced with mathematical models that resist monopolization by de-monetizing predatory behaviors, thus increasing incentives to cooperatives.

The Nexus Protocol integrates into the TAO framework, a seven layer software stack that enables the simplified implementation of smart contracts, DApps, tokens, and assets (NFT’s) through a set of Application Programming Interfaces (APIs).

In keeping with true open source crypto values, to preserve the white paper as an open specification, it was time stamped and recorded on the Nexus blockchain under blockchain asset name US:NP-WP. The raw blockchain asset information is shown below and publically available through the Nexus API.

Nexus.io is a community driven project with the common vision of a world inspired by innovation and responsible values, expansive technology, and the fundamental quality of connection being ubiquitous, free, and available to everyone.