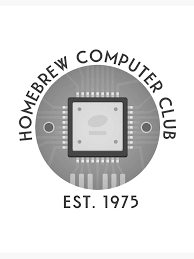 Back in 1975, a group of electronic enthusiasts formed what was called the Homebrew Computer Club. The club was based around the MITS Altair 8800 microcomputer. This gave hobbyist the ability to build computers for themselves that they previously could only dream of using.

1993, the World Wide Web provided a network of interconnected supercomputers so people all around the world can access these things called "web sites" via a hyperlink (HTTP). People were able to launch web sites onto the World Wide Web for others to be able to access from a browser where ever they had an internet connection.

Shortly after, engineers around the globe where developing amazing web sites such as blogs, search engines and social media platforms for them to be able to share knowledge and connect with others that which they could never have done before.

The best things in this world start as homebrew, passion projects based around a newly introduced technology that give people the ability to do something they couldn't do before.

Service Workers are a newly introduced web technology which are programmable web proxies that can intercept and rewrite network requests. This allows for web sites to support granular caching. This means that web sites can now be installed onto any device (iOS, Android, Windows, Mac, Linux) to be able to work offline and provide significant performance increases.

We are now starting to see hobbyists take advantage of Service Workers to build "Progressive Web Apps" for personal usage. Never before were we able to simply build web sites, package them into a small bundle and install them onto any of our devices for a lightweight, native app experience. With the freedom and flexibly of the internet plus buttery smooth navigation, is something that will truly make an impact in the world.

I am excited to see a future where apps move away from these bloated, ad-driven, storage / battery intensive programs and back into their original vision as simple lightweight tools people can use across all of their devices for solving specific tasks.