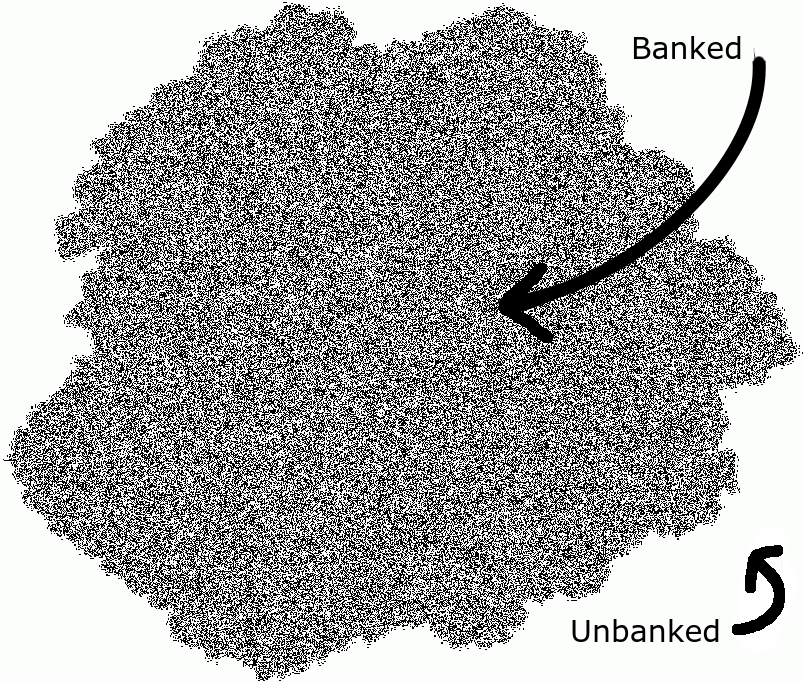 Bitcoin will eventually absorb all fiat currency in the world as Blockchain and other clients are installed globally. The jurisdictions that allow companies that facilitate this transformation to work unencumbered are going to be the new financial centres of the 21st Century.

Whether or not your aim is to dominate in Bitcoin services as a nation, there is no other rational way to approach this other than abandoning KYC/AML, and Conway’s Game of Life provides a neat illustration of why this is so.

The Game of Life, also known simply as Life, is a cellular automaton devised by the British mathematician John Horton Conway in 1970.

The world in the Game of Life is a two-dimensional grid of square cells, each of which is in one of two possible states, alive or dead. Every cell interacts with its eight neighbours, which are the cells that are horizontally, vertically, or diagonally adjacent. At each step in time, the following transitions occur:

Let us now superimpose this simple idea on to Bitcoin adoption. Imagine a world where there is total KYC/AML, and it has been running for years, with steady growth in Bitcoin adoption. The illustration below is a picture of this world; it is a grid with one billion cells in it. Each cell is a human being who uses money or Bitcoin. If the cell is black, they use Bitcoin as money. If the cell is white, they use fiat currency as money.

For a cell to turn from white to black (a person starting to use Bitcoin), fiat must be converted into Bitcoin at a KYC/AML entry point. This happens in a thin line at the edge of the fuzzy grey mass, via compliant companies that provide this conversion service.

Everyone outside in the white zone is either unbanked or using only fiat currency and banks. Everyone inside the mass in the black zone uses Bitcoin. Those in the black zone do not ever engage with KYC/AML, because they already have Bitcoin, and regularly send it anywhere, to any person, globally without further permission of any kind.

The central mass increases in size as it absorbs fiat currency. It will keep growing until either it absorbs all fiat currency, or a lower than “total absorption” equilibrium point is reached. A lower than total absorption equilibrium could be caused by the Bitcoin network reaching a technical upper limit (like the transaction rate limit) or a psychological or political distortion (banning, taxation, FUD, usability or some other artificial pressure).

We can see from this illustration and thought experiment that eventually, there will be a huge number of users who will never again need to be KYC/AML verified, because their money exists and circulates freely only as Bitcoin. This means that inside the Bitcoin ecosystem, KYC/AML is worthless after the first conversion. It also becomes immediately clear that any Bitcoin leaving the mass on a peer to peer basis when new Bitcoin users are brought in, creates more mass without KYC/AML, and this amount will be very large once the central mass is large.

This simple illustration shows what will happen as Bitcoin absorbs fiat currency. KYC/AML will have a short life, after which it will worthless as a tool to track people, since a large number of users are in Bitcoin and never touch fiat.

Rather than go through this completely pointless stage of KYC/AML, a nation with competent leaders will understand the inevitable, and race to attract companies into their jurisdictions by eschewing the regulation of Bitcoin services.

The benefits of the virtuous circle of Bitcoin firms all incorporating and working in the same small area of the same city cannot be overstated. As a long term strategy, abandoning KYC/AML is the only logical path.

Inside the absorption zone is where all the businesses touching Bitcoin will operate. That is where Bitcoin “pure play” businesses will flourish, and that means software companies, providing the very important wallet and merchant services, new classes of service built on MultiSig and the other tools in Bitcoin; powered escrow services, time triggered conditional payments and many other things.

Finally, here is an unmissable comment from Philip Raymond, Boston co-chair of the Cryptocurrency Standards Association:

It is not unusual for a new technology, a new platform, or even the shift to a new paradigm to be fuelled by crime or vice. The early VCR had no TV tuner or timer (to store and playback television programs). A few were used for high school AV projects or auto showrooms, but consumer adoption would have been retarded, if not for pornography.

Bitcoin is perceived by national legislators and regulators as a threat to governments and their ability to collect taxes. (This is changing in the US, where legislators are gradually recognizing that cryptocurrency presents more opportunities than threats).

The threat perception is an illusion. If cryptocurrency begins to be perceived and used as a value store unto itself (and not as just a transaction/debit instrument), it could begin to displace fiat currency for transactions and even savings.

This will impact some institutions, such as central banks, national treasuries, currency boards and the TYPES and METHODS of tax collection. But it will not weaken weaken the authority and ability of governments to pass laws, enact taxes, enforce tax collection, or spend.

More importantly, if a truly decentralized p2p currency, such as Bitcoin, begins to displace a nation’s currency (being trusted more than the printing press at the mint), it will ultimately lead to very positive things for both the citizens and their government.

Finally, governments will cultivate genuine trust, because they cannot fund projects by inflating the money supply. They will not be able to spend without a at least an accounting entry for the project or account to which is is applied. Most importantly, they will have proof positive that the country is living within its means; balancing every dollar spent with a dollar collected, earned or loaned by a willing partner.

Bitcoin is not a threat at all. Today, it’s a Geeky value transfer mechanism; tomorrow, it is likely to be the value in our wallets, all on its own. But, it is sorely misunderstood by the masses, and herein is its biggest challenge. Great inventions and revelations are often misunderstood or discounted: Copernicus in the 1500s; The “Democracy Experiment” in the 1700s; Emancipation in the 1800s; The Internet in the late twentieth century.

Bitcoin and the blockchain is similarly transformative. It is effectively a fundamental discovery rather than an invention.

And there you have it. “Bitcoin is not a threat at all”. Eventually, this will be the universal consensus. The only thing open to question is in what jurisdiction will all the Bitcoin businesses be head quartered.

all of the users in this graph have Bitcoin wallets like Samurai Wallet, and receive their Bitcoin in exchange for fiat via Local Bitcoins. These users are all in the absorption zone described above, where they don’t need a KYC/AML interface to send or receive Bitcoin.

Local Bitcoins is not head quartered in China, so the Beijing will not be collecting any taxes from it. It would have been far more effective for Beijing to allow its exchanges to run in an unregulated manner, absorbing customers and shaping behaviour of hundreds of millions of users by funnelling them into their controllable exchanges. Now they have a million headed dragon in their country, that can never ever be controlled or taxed.

This same effect will be seen in every country where Bitcoin is used. The country that allows Bitcoin companies to be head quartered in their jurisdiction without regulations will scoop up all the money from every other country, including China. I explicitly advised the British Government to take this position, and I am correct.