Asking for Blockchain in Your Daily Banking Solutions 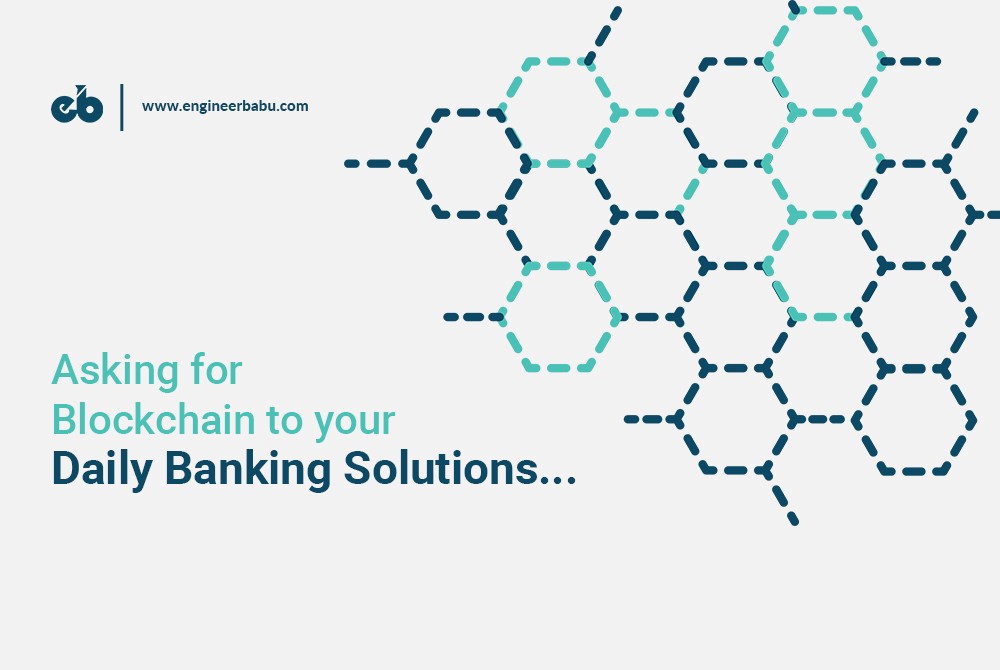 Restoring your beliefs against this technological adoption

Blockchain has become a common term in the current tech industry, not because of all the revolutions and markets it has created in a short duration of 8 years of its existence but all the advances it has yet to give. It has three different versions basically —

Blockchain 1.0 which has implementations in the form of cryptocurrencies like Bitcoin and Ether,

Blockchain 2.0 which comprises applications in Fintech industry and,

Blockchain 3.0 which will have more general applications such as tracking land ownership and settling property disputes on blockchain based consensus.

This generation of development has played an integral part in the development of the blockchain ecosystem and have paved the way for much bigger implementations of the blockchain. Applications of Blockchain are already past the version 1.0 with hundreds of cryptocurrencies and related ICOs (Initial Coin Offering) in existence. Now its time to revolutionize the Fintech industry using Blockchain 2.0 based applications.

Is Conventional Banking at stake?

There have been some early adopters of this technology already like Santander Bank, who has found more than 25 use cases of blockchain in their banking platform. Banking industry works on the trust and loyalty of general public in them and therefore they have to use technologies which are thoroughly tested and have zero failure rate because if the transactions or other banking processes run over erroneous systems then banks can’t be trusted by anyone. This is the main reason that banks have been unchanged for so long and are resistant to change their technology stack when it comes to the adaption of new technology.

But this time it is not a question of whether they should move to blockchain or not but when they should shift to the blockchain. This is because, when you look at the promises and applications of blockchain in the banking sector, it is certain they don’t have a choice. They have to shift to blockchain if they want to survive this century. Let me tell you why this is the case, But first, understand what banks currently use to serve their customers.

Banks today are generally run over digital platform based on Java or any other such languages. They have an interface for their employees and an access control system throughout the organization which defines what an employee can or cannot do. So, for example, a cashier can deduct the amount from the system or increase the amount on the basis of a request of the respective account holder. But there is a major loophole in this system which is the cashier itself. Think about this situation where the bank cashier went rogue due to some reasons and decided to deduct a certain amount from any customer’s account. Of course, there is a human based check on the cashier whether he or she has done some illegal transaction or not but this is only done after the cashier has done some illegal transaction. The system, the technology itself is not able to do anything to stop or put a check over such actions.

Here come the features of Blockchain to rescue. If such transaction had been done on a platform based on the blockchain, then this would have been stopped on the basis of consensus of the nodes involved and the cashier would have been identified without even conducting an inquiry. This is possible because of a decentralized and trustless system.

Decentralized means no individual owns or runs it. Nobody has complete ownership over everyone else, instead, everyone plays a role in making a decision for the complete system. Each individual has equal voting rights whether to take an action or not and any individual, part of the blockchain, can suggest a process and all the people can vote whether to accept it or not. This makes it a perfect system for the banks where people can actually own their money rather than giving it to a central authority which makes all the decisions and all the people who are actually running the bank have no say in it.

Secondly, blockchain provides a trustless system for managing assets and property. What this means is, you don’t have to trust anyone else to make sure that your transaction is verified or not. All you have to do is perform a transaction of your assets or property and blockchain based platform will itself make sure that it is valid and will also notify you if some invalid transaction has occurred from or to your account.

Picking up the former cashier example, these two features will render any fraud transaction invalid and will stop any harm to the account of the victim. This will render the costs of inquiry and hiring human based checks in the system to null and will help in setting up a transparent system in the society for property management. There has never been such a revolutionary system in existence in human history and that is why people in the sector are excited and spooked over this.

Another way blockchain helps is that it is inherently open in nature. What this means is you don’t have to ask anyone or take permission from anyone to become a part of the network. If you have a machine or computing resources then you can easily become a node and contribute to running the network. This makes the use of blockchain even more necessary because it is above the concepts of discrimination and bias. It treats all the nodes same and only on the basis of their proof of work or proof of stake, it takes the actions. No other node or centralized actor has the power to take and implement decisions over you or your assets.

In the current scenario, if you have to open an account in a bank, you have to go through a tedious process of norms and regulations. Also, you have to put your faith in the bank that they will protect your life savings and do the right thing with them. But this system is inherently wrong from its nature. Banks don’t need to hold all this information about the account holder and in the same way, the account holder does not have to put faith in the bank. It is your money. You should own it. This is what blockchain offers. If a banking system is running on blockchain then you can just copy the metadata and get started with a bank account. It’s that simple and yet revolutionary.

Just imagine the implications of a platform comprising of above features in banking. This is what makes blockchain, not an option, but rather a necessity for banks. They can, of course, delay the switch but the switch to blockchain is inevitable and the experts of the industry agree to this. That is why all the top 10 to 20 banks of the world are investing heavily in the research over this technology.

Read My Other Related Articles

I am Mayank, Cofounder of EngineerBabu. Feel free to reach out to me on LinkedIn | mayank@engineerbabu.com (About EngineerBabu — Medium).

In addition EngineerBabu Help startups, enterprises, and owners to grow their business by building high class IT solutions. 95% of projects developed by them were completed on-time. 30+ funded by VCs, Win most innovative Premier Design Award, selected in Y-Combinator 2016 & 2017.