Ant Financial: Controversies around the Biggest IPO in History 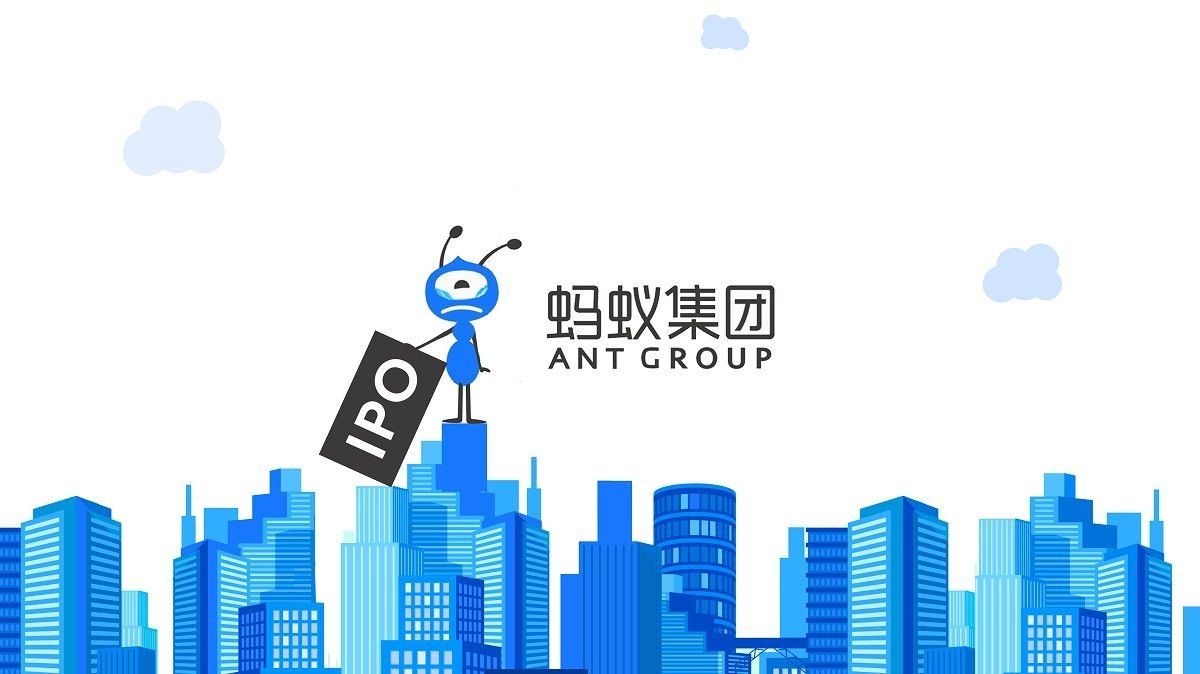 Engineering at Brex, Apple, Microsoft. I write about fintech, crypto and China

At a share price of 68.8 Chinese yuan, the Ant Financial IPO was expected to raise $34 billion in its public offering at the Shanghai and Hong Kong exchanges -- which would value it at over $300 billion.

This would have been bigger than the historical Saudi Aramco IPO last year, and an enormous début for the Shanghai Stock Exchange STAR market, the up-and-coming exchange for technology companies that competes with Nasdaq.

It’s rare for this many ministries and commissions to probe any financial organization at once.

About a week ago, Jack Ma gave a 21-minute speech at the Bund Financial Summit in Shanghai, in which he dissed the domestic financial system:

“China’s financial system does not have systemic risks because there is no system. Banks of today are still antiquated. The Basel Accords (bank supervision) committee is like an elderly club. So many files saying you can't’ do this, you can’t do that.” 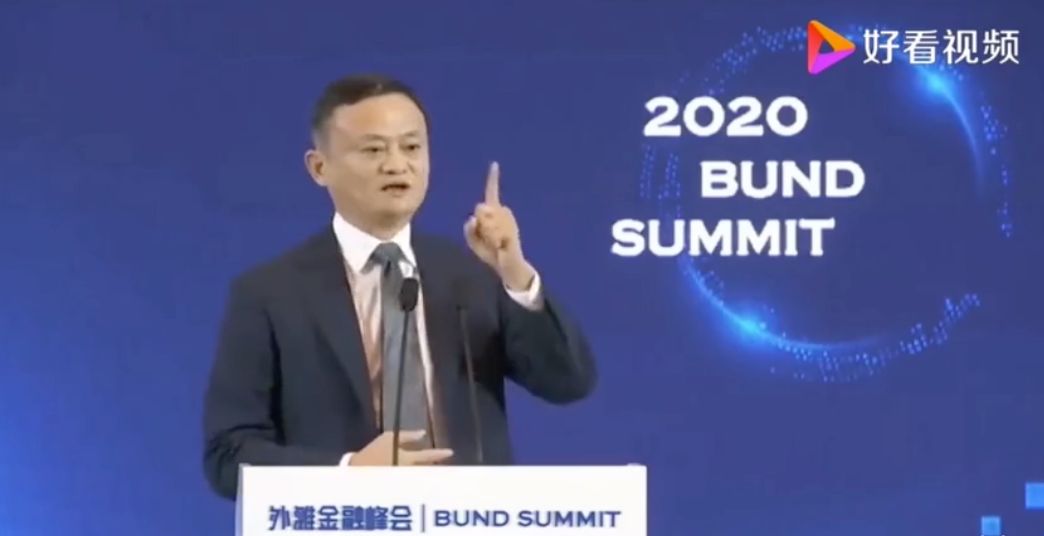 Similarly, 12 years ago, Ma made a famous statement that “if banks don’t change, we will change the banks.”

China’s Financial Times (run by the central bank) published a statement saying that “if large internet companies develop financial services under the guise of being a technology company, it is not only evading regulation but also creating risks to the consumers.”

Before we go any further, it is important to understand the Ant Financial product at the center of this debacle: Huabei. 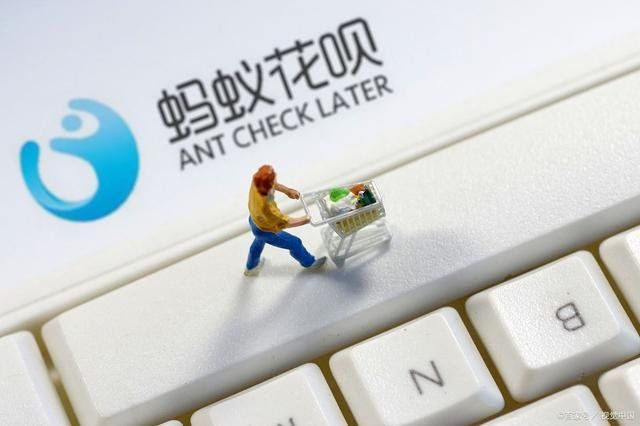 Huabei (蚂蚁花呗) is a consumer credit product that allows users to get a credit line ranging from 500 (70 USD) to 50,000 yuan (7,000 USD). It was initially targeted for Taobao and TMall (online shopping platforms) use cases, through the motto of “shop first, pay later”.

Huabei became one of China’s most popular financial products. It went live in 2015 and was the source for about 9% of all transactions on Alipay. Recent numbers show that 1 in every 4 millennials in China uses Huabei.

Most people use this product to shop for consumer goods (especially fashion) and food.

When a user gets on Huabei, they first decide how much credit they need, and confirm that they will pay for the amount spent in the month after receiving the goods. The payment period can go up to 41 days. This is the concept of “buy this month, pay next month, no interest.”

Huabei also offered the ability to pay in installments. The money can come from a user’s Alipay wallet or debit card.

In 2016, the Ant Huabei Consumer Credit Asset-Backed Securities was listed on the Shanghai Stock Exchange -- the first consumer fintech ABS of its kind. This turns the credit extended to users into a financial instrument that can be traded in a securities market.

What are asset-backed securities?

Also referred to as ABS, it is a bond or note (investment security) that is collateralized by a pool of assets like loans or credit card debt, also known as receivables. Similar to mortgage-backed securities but the underlying collateral is not mortgage-based. For more, see the investopedia definition 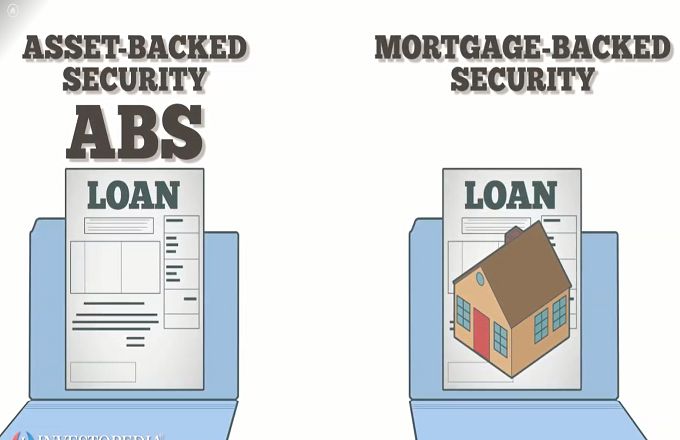 Some sources claim that regulatory agencies have applauded Ant for encouraging consumer credit innovation, and for increasing the consumption potential among those with less spending power.

Many of those serviced by Huabei are people who never touched traditional financial institutions. Among the users, more than 60% have never opened accounts in traditional banks.

Those with a monthly income of under 1,000 yuan saw a 50% increase in their spending power.

What happens if you don’t pay back?

Users on Zhihu (Chinese Quora) shared their first-hand experience: First, you get reminders from Ant. If you still don’t pay back in 6 months, it escalates to a third-party debt collector who will continue the reminders. They will keep calling you. One user said they took 3 years to pay back their Huabei debt. Racking up debt affects your “sesame credit score”, a score created by Ant Financial which is becoming a legitimate/legal credit score in China (think of it as a FICO replacement).

Why did this product spoil Ant’s IPO?

Where did Ant get all this money to lend out? Apparently, it's not from Ant’s pocket, but repeated cycles of borrowing/raising and lending.

Here’s the scenario from one of Ant’s initial loan products, as detailed by Huang Qifan, the former mayor of Chongqing:

1. First, the company starts with 3 billion yuan in principal. Borrow 6 billion from the bank, so it looks like you have 9 billion in your balance sheet.

2. Lend out that money. Now you have 9 billion in IOUs, which you can use as collateral to borrow more money from banks, or sell as debt (asset-backed securities).

3. With the borrowed (or raised) money, lend it out again. Use those new IOUs as collateral to continue borrowing or raising. And so on. 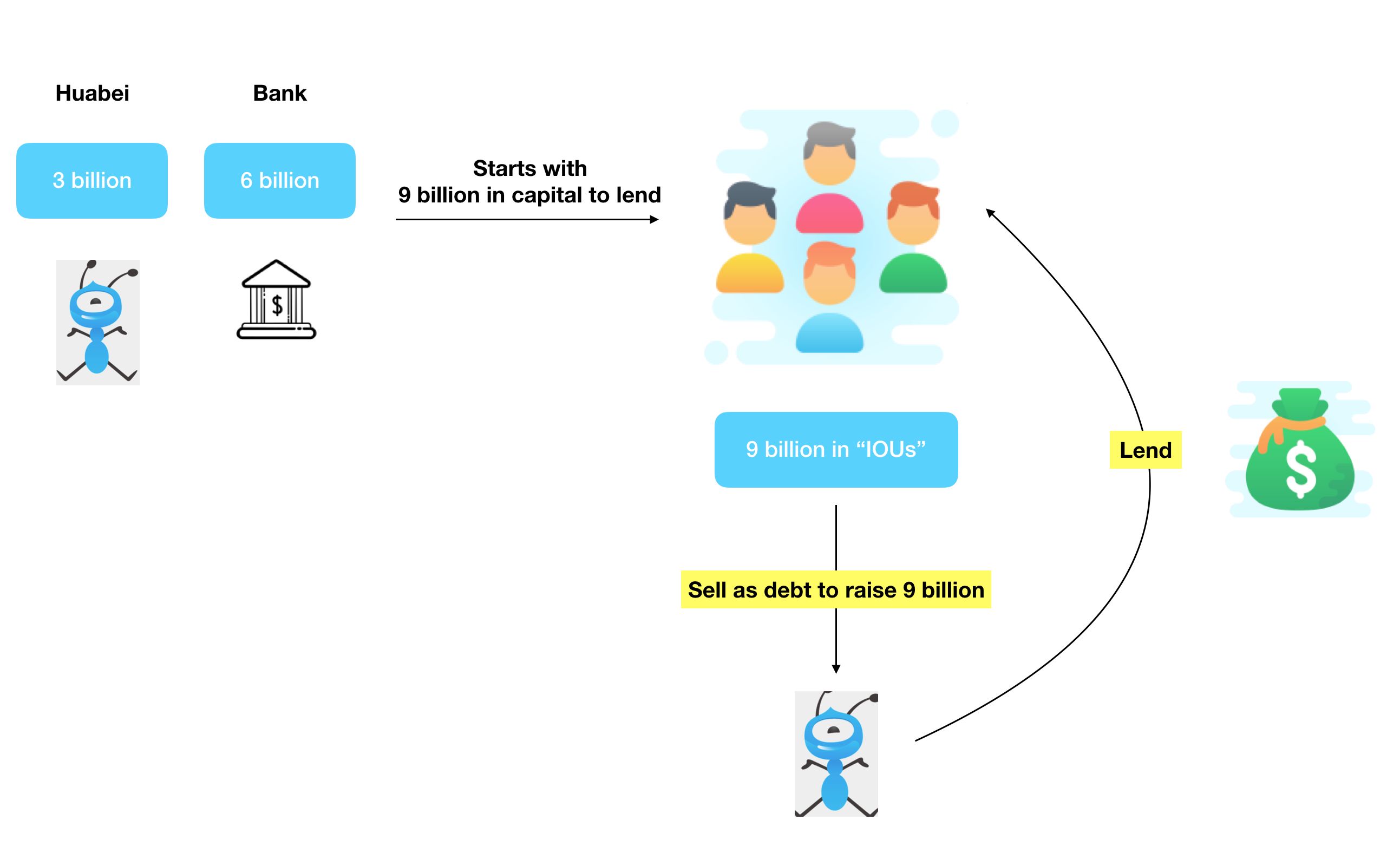 Ant started with 3 billion in principal and was able to borrow 9 billion in the course of 40 cycles, resulting in 9 billion * 40 = 360 billion. This is equivalent to 120x the principal.

Banks normally don’t let you borrow the full amount. Say you go in for the first time with 1 billion, you can only borrow 700 million from the bank. Next time around, you come in with 700 million so you can only get 490 million in loans.

How was Ant able to raise so much? Through alternatives such as asset-backed securitization, as detailed above. This allows Ant to borrow from other sources such as securities markets, instead of banks. Regulators have since drafted measures to prevent this sort of cycling in asset securitization.

This phenomenon was also described in a video that went viral across WeChat circles.

Here’s another problem: Most of the users of Huabei are very young, many of whom don’t have a stable source of income or financial literacy. Many of those don’t have the savings to pay back their loans on Huabei.

Some argue that Ant has hedged itself by only holding 3 billion in principal, and transferring the liability to the users and those who hold the “IOUs.” This may be a reason for Huabei's ample credit lines and lenient terms.

Huabei was recently shut down, for reasons one can expect.

Guo Wuping, the Director of the Consumer Protection Bureau of the China Banking and Insurance Regulatory Commission wrote an article saying that products offered by Ant Financial like Huabei are essentially the same as bank-issued credit cards, as they extend credit in addition to allowing payments in installments. Their source of revenue is the interest and expenses paid by consumers -- not different from microloans provided by banks. From the perspective of consumer risk control, when the first source of repayment is insufficient, banks require strict guarantees such as a mortgage as a second source of repayment. But fintech companies require cash in the account as a guarantee, or postpone the payments of funds and charge other fees as forms of risk control.

Guo also argued that fintech companies should be scrutinized even more than “traditional” financial institutions, as they are tied to online shopping, payments, and thrive on the stimulation of spending. There is a lack of strict requirements and guarantees around a consumer’s ability to repay their loans, which often results in excessive, risky issuing of credit (think sub-prime loans).

On the evening of November 2, the China Banking and Insurance Regulatory Commission and the Central Bank jointly issued a draft of the “Interim Measures for the Management of Small Online Loans”, which targets micro-finance services such as Ant’s Huabei.

The regulatory crackdown and new measures will force Ant to behave and earn more like a traditional bank. Ant’s official response to being interviewed by the group of regulators was short: “Safe innovation, embrace supervision, serve businesses, and win together”

In the past 5 years, this fintech product quickly became China’s biggest lending service. Increasingly, members of the millennial and Gen Z populations are not going to traditional banks for accounts and financial services.

This is a fascinating story involving the disruption of financial institutions, risk-management in financial technology, and the mindset of today’s young adults on their savings and expenses.

This is an unfolding story -- another “black swan” to emerge in this year of paradigm shifts. We will soon find out if and when this unprecedented IPO will come on stage.

Thank you to Tieshun Roquerre and Julia Xu for feedback on this post.

A Brief History of Jack Ma's Ant Financial - the $150B Unicorn