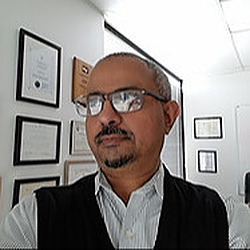 No.1 Voice to Follow in Tech & influencer on LinkedIn|Expert:IoT-Blockchain-AI |Author

Affective computing is the study and development of systems and devices that can recognize, interpret, process, and simulate human affects.
It is an interdisciplinary field spanning computer science, psychology, and
cognitive science. While the origins of the field may be traced as far
back as to early philosophical inquiries into emotion (“affect” is,
basically, a synonym for “emotion.”), the more modern branch of computer
science originated with Rosalind Picard’s 1995 paper on affective computing. A motivation for the research is the ability to simulate empathy.
The machine should interpret the emotional state of humans and adapt
its behavior to them, giving an appropriate response for those emotions.
Affective computing technologies sense the emotional state of a user (via
sensors, microphone, cameras and/or software logic) and respond by
performing specific, predefined product/service features, such as
changing a quiz or recommending a set of videos to fit the mood of the
learner.
The more computers we have in our lives the more we’re going to want them to behave politely, and be socially smart. We don’t want it to bother us with unimportant information. That kind of common-sense reasoning
requires an understanding of the person’s emotional state.
One way to look at affective computing is human-computer interaction
in which a device has the ability to detect and appropriately respond
to its user’s emotions and other stimuli. A computing device with this
capacity could gather cues to user emotion from a variety of sources.
Facial expressions, posture, gestures, speech, the force or rhythm of
key strokes and the temperature changes of the hand on a mouse can all
signify changes in the user’s emotional state, and these can all be
detected and interpreted by a computer. A built-in camera captures
images of the user and algorithm s are used to process the data to yield
meaningful information. Speech recognition and gesture recognition are
among the other technologies being explored for affective computing
applications.
Recognizing emotional information requires the extraction of meaningful patterns from the gathered data. This is done using machine learning
techniques that process different modalities, such as speech
recognition, natural language processing, or facial expression
detection.
Emotion in machines
A major area in affective computing is the design of computational
devices proposed to exhibit either innate emotional capabilities or that
are capable of convincingly simulating emotions. A more practical
approach, based on current technological capabilities, is the simulation
of emotions in conversational agents in order to enrich and facilitate
interactivity between human and machine. While human emotions are often associated with surges in hormones and other neuropeptides, emotions in machines might be associated with abstract states associated with progress (or lack of progress) in autonomous learning systemsIn this
view, affective emotional states correspond to time-derivatives in the
learning curve of an arbitrary learning system.
Two major categories describing emotions in machines:Emotional speech and Facial affect detection.
Emotional speech includes:
Facial affect detection includes:
The Future
Affective computing tries to address one of the major drawbacks of online learning versus in-classroom learning _ the teacher’s capability to immediately adapt the pedagogical situation to the emotional state of the student in the classroom. In e-learning applications, affective computing can be used to adjust the presentation style of a computerized tutor when a learner is bored, interested, frustrated, or pleased. Psychological health services, i.e. counseling, benefit from affective computing applications when determining a client’s emotional state.
Robotic systems
capable of processing affective information exhibit higher flexibility
while one works in uncertain or complex environments. Companion devices, such as digital pets, use affective computing abilities to enhance
realism and provide a higher degree of autonomy.
Other potential applications are centered around Social Monitoring.
For example, a car can monitor the emotion of all occupants and engage
in additional safety measures, such as alerting other vehicles if it
detects the driver to be angry. Affective computing has potential
applications in human computer interaction, such as affective mirrors
allowing the user to see how he or she performs; emotion monitoring
agents sending a warning before one sends an angry email; or even music
players selecting tracks based on mood. Companies would then be able to
use affective computing to infer whether their products will or will not
be well received by the respective market.
There are endless applications for affective computing in all aspects of life.
Ahmed Banafa, Author the Books :
Secure and Smart Internet of Things (IoT) Using Blockchain and AI
Blockchain Technology and Applications
Read more articles at Technology Trends by Prof. Ahmed Banafa

What is Autonomic Computing?