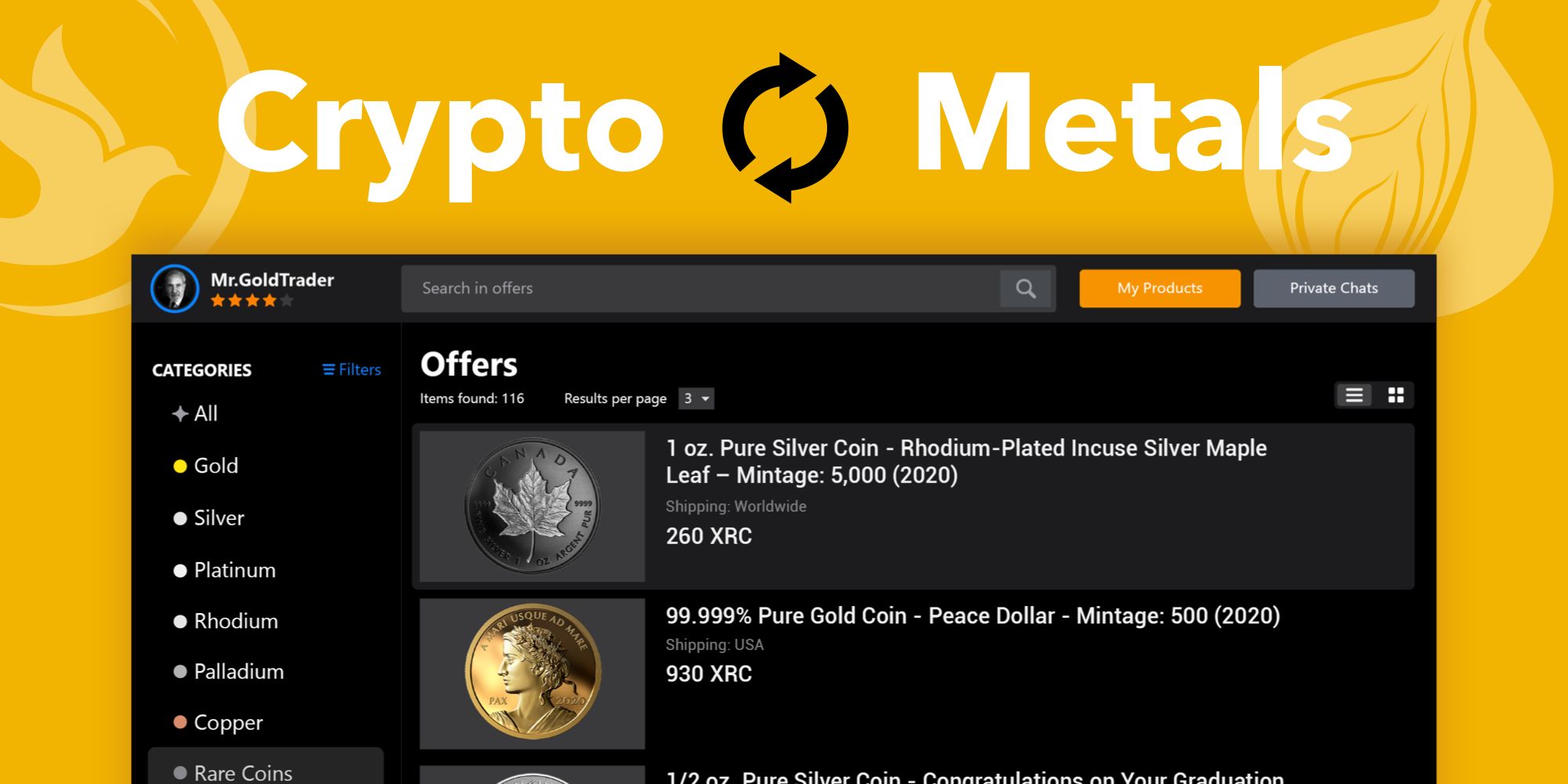 The idea of a truly decentralized anonymous marketplace isn't new, it has a long history among cypherpunk and crypto communities. There were various attempts in the past to make it a reality, including Satoshi Nakamoto, the original bitcoin author, who also tried to implement a marketplace in bitcoin code. However, presumably due to complexity associated with such an implementation, the code was later removed.

FreeMarketOne by xRhodium leverages the benefits of blockchain technology and provides a peer-to-peer, anonymous, decentralized marketplace for investors and traders who are into the trading of precious metals. It allows buyers and vendors to connect and trade directly, without any middleman. This prevents your personal data and trading history from falling into the wrong hands.

FreeMarketOne platform gives traders complete freedom to connect with global players and trade precious metals without any limits, fees or restrictions. The app ensures that identity always remains protected from regulators, governments, and other individuals. The best thing is that one doesn't need to provide any KYC data or personal information to be a user on the platform.

The app is designed to be as simple as possible. No special skills are required to set it up and start trading. What you will get is a familiar trading experience, only in a totally private way. FreeMarketOne makes use of the best tech to safeguard your identity during trading, such as blockchain, end-to-end encryption and Tor.

Two blockchains solution. The app features the revolutionary implementation of two blockchains running in parallel. First one is a base blockchain and it stores information about users' encrypted data, reviews, ranks system etc. Those records are permanent. Second blockchain is using float genesis block and contains data about offers and trade history. It expires in approximately 3...6 months. This means that that the public records of transactions on the main blockchain, where transactions between peers are recorded, will be wiped out clean periodically thus producing a clean slate for the traders with the generation of a new periodic genesis block thus neutralizing the snoopy eyes of unfriendly entities. However, the rating system of traders which will be based on the volume and performance of achieved trades cumulatively, will be upheld in a first blockchain, that will preserve the details and the rating of each trader.

Integrated Tor client. FreeMarketOne is built on top of Tor, and thus inherits its censorship resistance. The application connects to Tor automatically when it starts, so you don't have to to do anything to make it work.

Encrypted chat. Communicate privately with sellers or buyers using end-to-end encryption. Messages are only seen by who you send them to and no one else.

The platform currently runs on a testnet to ensure that major bugs are eliminated before it goes to a mainnet. You are able to download and test the app for Windows 10, or compile from source code for Linux and MacOS.

Disclaimer: The article is written by xRhodium team member. xRhodium (ticker XRC) is an open-source, community-based cryptocurrency launched in 2017. FreeMarketOne uses XRC cryptocurrency as a settlement-layer for all transactions made on the marketplace.

Related Stories
Subject Matter
Download Mysterium VPN - First 20 GB streaming FREE by @Mysterium Network
#promoted
What Is It About Blockchain That Seduces Normies: An Analysis Through Free TON's Lens by @nonamec3po
#blockchain
Decentralizing The Internet: The Hitchhiker's Guide by @nich
#decentralized-internet
DINO (Decentralized In Name Only) Vs. True Decentralization by @paul-arssov
#decentralized-internet
Make The Most Out of Your Portfolio With A Q DeFi Rating by @anton-dzyatkovskii
#blockchain
DAOs - Blockchains Final Frontier by @kameir
#dao