Last week I published one of the most important articles of my whole blogging life: an interview with Vive China president Alvin Wang Graylin.

Mr. Graylin is someone that I’ve always admired for his passion for virtual reality, his kind attitude, and his remarkable life success: he’s been able to become a very important business person notwithstanding the fact he’s born in a humble Chinese family. Interviewing him and talking with him directly on Skype, I had the epic opportunity of being inspired by such a successful person and learning a lot from him.

So, apart from all the virtual reality related tech stuff (I asked him when the Vive Focus will come to Europe and what will be the price of the Vive Pro), I have learned a lot about how to become successful as a person and as an entrepreneur and I want to tell you these interesting things I learned.

1. Find your mission in life

At the end of interview, he said one of the most important statements: I asked him what’s the right attitude to have success in life, to become successful as his and he answered with

In this sentence, there is just everything. You have to find something you really believe in, your life mission and once you find it, work very hard on it. It should become your goal, the reason why you wake up in the morning and you should be so passionate about it that even working 20 hours a day should become possible (ok, maybe not every day, but you got the idea).

He tried VR in the 90s, a moment when there was hype for it, but it had no chance to succeed in mainstream adoption. But he really believed in this technology, he worked very hard with it and in the end, he found himself being in one of the top positions in one of the companies that are making VR widespread now. A company that can change the word. It has been a long ride, and in the meantime, he started other businesses, but his vision was so strong that he managed to succeed in this. Find your mission, be diligent, work hard and you’ll get what you want.

Regarding the mission, he closed the interview making a question to my whole audience:

If you lived in a world where money and location didn’t matter anymore and you can have anything you want and be anywhere you want, would you still spend your time doing the things that you are doing today? Or would you be doing something else?

Ok, I know that these statements are not always applicable… maybe you’ve children, there’s the rent to pay, etc… but if you’re still in the position to choose, are you following your passion? Are you trying to create the life of your dreams and maybe change the world? (“make the world a better place”, as all startuppers say?)

2. Be kind and smile

Mr. Graylin has not taught me this second lesson with something that he has directly said to me, but with the attitude he showed during the interview and also before and after, when we got in contact with social media.

When the interview began talking about more comfortable topics (entrepreneurship, China, etc…), I remember seeing him smiling a lot. It was 5 p.m. in Beijing, so I think that he had already spent a lot of hours working. He was talking with a random Italian guy that was asking him uncomfortable questions and he still smiled a lot. That was wonderful and made also me feel a lot better: this interview felt to me like talking with a friend, notwithstanding the fact he’s Mr. President and I’m Mr.No-one.

Even if I’m not a top Virtual Reality blogger (I mean, I’m not Upload), he agreed in doing this interview just because I asked him. Previously, he also took his precious time and invested it in reading my articles related to Vive products and giving me feedback. He surely made this because of the passion of point 1, but there’s something more: an open attitude, a very positive attitude towards everything and everyone. He’s a person that gives value to people, that’s why he reached that position.

I have still to work a lot on this point.

3. A startup must solve a real problem

You must solve a real problem that people will pay for having it solved. And you are qualified to solve it

So, it’s great if you’re an entrepreneur that is following his/her passion and you’ve an attitude of giving value to people. But if your company is not built around a real problem, a problem for which people are going to pay, it is doomed to fail.

So, before investing your whole life in a project, ask your target market if the product you’re going to build is of any interest for them. And how much they will pay to see it solved. If this survey gives a positive result then go on with your project. Otherwise, stop it or you’re going to have really hard times trying to dedicate your whole life to a project that is doomed to fail since day 1.

Be careful of compliments, they’re very dangerous: I had a lot of compliments for my Immotionar startup by virtual reality enthusiasts and other entrepreneurs. Sometimes I felt like a rockstar. But compliments are not a currency and, with time passing by, we discovered that people were not interested in buying our product, and in the end, we shut down.

“A startup is all about money” is a sentence that I love to say. So, follow your passion, but find a way to monetize it by giving real value to other people.

4. Ship a product that works well

The first question that I asked him is why the Vive Focus comes with one 3 DOF controller while we all were waiting for two 6 DOF controllers. This makes the Vive Focus feel incomplete for us virtual reality enthusiasts because doesn’t give you really the sensation of being in VR because you don’t have both your hands moving in the virtual world.

He answered me that when designing a product there are a lot of things to keep in mind, like price, usability, stability, the needs of the users, etc… and taking all these things in count means making compromises.

He knows that the Focus would be better with two 6 DOF controllers, but they didn’t manage to make a solution with such controllers that was stable and easy to be used, so they didn’t implement it. It has been a tough choice, but it was necessary: it is better to ship something that has few features but works and works well, than something that has a bazillion features but no one of those is implemented in a satisfactory way.

When building your MVP or your final product, focus on the most important things and on how to implement them in a polished way. Don’t add buggy features just to pump up your marketing or because your customers want them. If they won’t work, people will just complain and will find your product unusable. They will be excited at first, but disappointed later on. So fewer features, but epic ones.

5. China is a difficult market

Every day we read articles on how the Chinese market is huge and rich and how China is becoming a worldwide leader in some technology. So, all the companies of the world want to enter this goldmine.

But the problem is that this market is far from easy: Mr. Graylin told me how the Chinese market is a very competitive one and that it is very easy for a Western-based company to lose against a local Chinese one (e.g. eBay has lost against TaoBao and Alibaba).

The key factors to succeed in China are:

+1. Your dreams may come true

This is something that I’ve learned in an indirect way by this interview. I asked Mr. Graylin an interview, but I thought that I had 0 chances to get it… he was a too important person. I couldn’t believe he accepted until the moment he started calling me on Skype. He was late to the call and I continued thinking that it wouldn’t have happened until that moment. But then everything was real.

The article about the interview got a good number of views, but, most importantly, was quoted inside an article by Road To VR. Road To VR is one of the 2 most important VR-related websites (the other one is Upload VR) and since when I started working with this amazing technology (three years ago), I got informed on this website almost every day, dreaming of seeing my name on one of its articles one day. I always failed in it and I thought it was just impossible. But on Wednesday, this little dream of mine has come true: there is my name in an article that talks about something great that I have done (the interview with Mr. Graylin). I was super-happy for this, it has been astonishing.

My passion is virtual reality and every day I work hard for it. I try to do a lot of things and most of the times, I fail. But sometimes the unexpected happens and the reward is very high.

Push yourself beyond your limits, make your daily work well with diligence, but also try things that can make you closer to your dreams, even if you think that they are impossible. 95% of times you will fail, but you don’t have to give up. Keep fighting, because the reward of that 5% is very sweet. And can change your life.

And this interview has changed my life: I have been inspired by a great person and I’ve managed to give more visibility to my hard work. But now, I don’t settle: I want to go even further…

If you liked this article, please make a little clap for it… but, most importantly, follow me to show appreciation for my daily hard work:

Consultancy company: http://ntwalkers.it/en/ (if you need some AR/VR or web projects, contact us!)

I’ll do my best to support you as well. Have an awesome day!

[A Response] to the Citron Research Report on Nanox 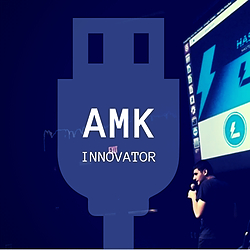