10 Ways To Refactor Your Python Code 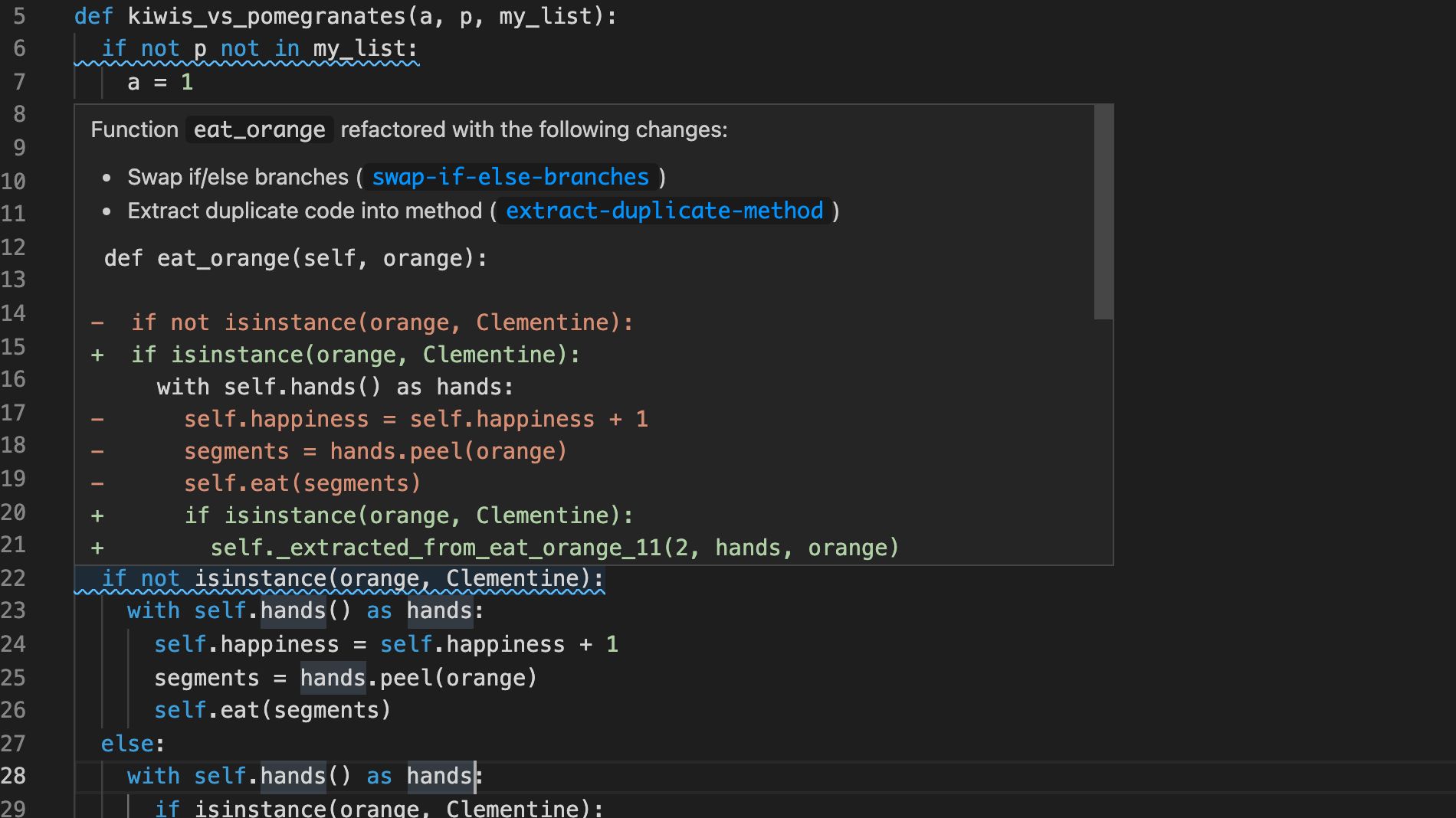 We help you make your Python code easier to read, understand, and work with through automatic refactoring suggestions!

One of the biggest tenants of programming in Python is writing code that's as understandable, but as concise as possible. It's so important that we have the term Pythonic to describe code that's written this way.

But we all sometimes fall into bad habits when we're in a rush to release new features and sometimes our code gets a bit... messy. Here are 30 ways you can think about refactoring your code to make it easier to understand, easier to work with, and just all around a bit more Pythonic.

1) Merge your nested if conditions

Too much nesting in your code can make it tricky to understand. Especially in Python where we don't use brackets to help out with delineation of different levels of nesting. We can easily reduce the levels of nesting we have to deal with by combining two or more

Can easily be condensed down to

2) Don't repeat yourself! Hoist duplicate code out of conditionals

We want to avoid duplicate code where possible and one of the most common places this crops up is within conditionals. If code is repeated in both/all branches of a conditional it's always going to execute, so we can hoist it out of the conditional and only used once.

is getting used no matter what. So we can just pop it out of the conditional altogether. And we get the added bonus that it's now going to be clearer what the conditional actually controls for.

We'll often want to check whether or not a condition holds for one or every item in a collection. Usually the way we see people go about this is with a for loop:

This gets the job done, but there's a much much more concise way to do it! Python has built-in

4) Keep your loops clean. Hoist statements out of for/while loops

Loops are almost always complex and tricky to follow. Adding in additional information to a loop that doesn't need to be there just makes the loop a bit more complex - so hoisting it outside the loop is a great opportunity to make things clearer!

variable is assigned in the loop. But, it's only read, not altered at all - so we can pull it out of the loop altogether.

Another common task we find ourselves doing often when programming is creating a collection of values. In most languages we could do something like:

and then iteratively fill it with our values. This isn't wrong in Python, but there's a much nicer way to do it using built-in comprehensions. They let us simplify the entire list creation into a single line and cut out the need to define the empty list. Our example would become:

Three lines down into one line is a nice win. Plus once you get used to the list comprehension syntax it actually is much more readable than the looped method.

Whenever we're dealing with updating the value of a variable relative to itself we can get a nice little simplification by using Python's expressions. Instead of:

We can just write:

It's not a huge change, but it's a bit shorter and more concise. Plus we only have to think about the

7) If expressions instead of if statements
Another common scenario we'll all deal with is looking to set a variable to one of two different values depending on some state. For example:

With an if expression we can cut that down to a single line:

This refactoring is a bit conditional because some developers don't find if expressions clearer than if statements. But in general I think that if the if expression is short and fits on one line then it's a definite improvement. But feel free to debate me on this one :).

When we're iterating over a list we often want a counter to let us know the index of the current item. Usually we'll see them written manually like:

But, Python has a built in function,

, that lets us generate the index automatically & lets us save two lines of code:

So often we'll have to add up a list of things. Thankfully Python has a built-in

function specifically for this. So instead of:

We can just write:

Not only is it shorter (which we love) but it's also more descriptive about what the line of code is actually doing - finding the sum of the price of hats.

Before we do something to a list or sequence we often want to check if there are any elements there. One way it's often done is by checking if the length of the list is greater than 0:

But Python automatically evaluates lists and sequences to

if they have any elements and if they don't. This means the more Pythonic way of doing things is:

It's a bit less cluttered to do things this way, plus it's following the conventions set out in Python's PEP8 guidelines.

There are tons of different ways to make code more Pythonic and easier to work with, these are just some of the most common examples we come across at Sourcery. This is a consolidated list of our broader refactorings series we first published on our blog. Let me know if you disagree with any of these - or if there are any other common refactorings you think are really important!

Related Stories
Subject Matter
Book a Demo. Ship Fast. Rest Easy. LaunchDarkly. by @LaunchDarkly
#promoted
Deployment Automation via SSH With Python Fabric: How It Works by @agzuniverse
#python
Python Access Modifiers: Public, Private, and Protected Variables by @kianooshsanatkar
#python
How To Become A Data Scientist: Skills & Courses To Learn Data Science by @Nikhil
#data-science
A Deep Look Into The Service Template Compiler Solution In Python by @asher-sterkin
#python
How To Use a FastAPI Abstraction To Query AWS Data Lake by @taavi-rehemagi
#aws-data-lake